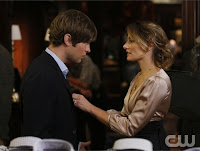 Welcome to your Wednesday morning television briefing. I was absolutely riveted by last night's episode of Fringe (more on that in a bit) and not so riveted by another dull installment of 90210. Meh.

The CW's buzz-worthy Gossip Girl scored the highest numbers ever in the life of the series, drawing in 3.7 million viewers on Monday, an increase of nearly 500,000 from the week prior and 300,000 above Gossip Girl's second season premiere on September 1st. Those numbers are even more palatable for the netlet when you realize that it's a full one million viewers more than tuned in to the third episode of the first season. Not doing quite as well? FOX's Terminator: The Sarah Connor Chronicles, which lost 800,000 viewers from last week's season premiere to sink to a low of 5.5 million, off 36 percent from its Season One average. Ouch. (Entertainment Weekly)

More talk from NBC chiefs about the quality work co-chairman Ben Silverman is doing (in between "[partying] into the night") as the network gears up to launch their new season on Monday. One choice quote: ""He is not bound by the old rules of doing business, and that scares a lot of people in Hollywood," said Jeff Zucker. That's putting it mildly. (Los Angeles Times)

HBO has cast Zach Galifianakis (Tru Calling) in Jonathan Ames' drama pilot Bored to Death, opposite Jason Schwartzman and Ted Danson; he'll play Ray, a struggling comic book artist who is the best friend of would-be hero Jonathan (Schwartzman), an alcoholic writer who tries to reinvent himself as a private detective. (Hollywood Reporter)

Russell T. Davies has praised British actor Russell Tovey (Gavin & Stacey, History Boys) and suggested that he would be a good replacement for David Tennant when he decides to leave Doctor Who. Tovey is himself no stranger to Doctor Who, having appeared as Midshipman Frame in the Christmas special "Voyage of the Damned." Davies also revealed that he tried to secure J.K. Rowling to guest star in a Christmas special but was vetoed by Tennant, who thought the casting idea "sounds like a spoof." (BBC News)

Worst. Title. Ever. FOX is said to be developing drama Georgia and the Seven Associates, a contemporary take on the Snow White fable from writers David Weissman and David Diamond (Old Dogs), director Ken Kwapis (The Office), and executive producers Chris Brancato and Bert Salke. Plot would follow Georgia Burnett, a young lawyer who finds herself exiled from a top law firm run by her evil step-mother and must team up with seven quirky lawyers (each of whom manifests a personality based on one of the fable's dwarves) at a storefront legal firm. Project is said to be described as "The Devil Wears Prada meets Taxi." I kid you not. (Hollywood Reporter)

CBS' comedy Old Christine has locked Tim DeKay (Tell Me You Love Me, Carnivale) for a three-episode stint this season; he'll play a new love interest for Christine (Julia Louis-Dreyfus). The duo are no strangers: DeKay memorably played Elaine's boyfriend Kevin (a.k.a. "Bizarro Jerry") in two 1996 episodes ("The Bizarro Jerry" and "The Soul Mate") of Seinfeld. (Entertainment Weekly's Ausiello Files)

Saturday Night Live attempts to be as "fair and evenhanded as possible" in their skewering of political figures and included Amy Poehler's portrayal of Hillary Rodham Clinton in order to not make their Sarah Palin sketch seem like an attack. (New York Times)

TNT has renewed Saving Grace and Raising the Bar, ordering 15 episodes of both to air in 2009. (Televisionary)

On tonight's episode ("You're Beautiful, Now Change"), the girls get their makeovers and go to Malibu for a swimsuit photo shoot with model/designer Susan Holmes.

Season Five (the final season on Bravo) of Project Runway continues tonight. On tonight's episode ("Transformation"), the designers work with college-aged women who are about to enter the workforce and are tasked with creating sophisticated looks for their clients; Cynthia Rowley drops by as this week's guest judge, and Kenley creates yet-another 1950s-influenced dress.

Unknown said…
While I liked Tovey as Midshipman Frame, I was hoping for someone older as The Doctor next time. We've just /had/ a fun, geeky young one. It'd be nice to go in another direction with it.

Anonymous said…
I do like Russell Tovey but whoever follows David Tennant in the role has very big shoes to fill. It is very hard to imagine anyone else as the Doctor after Tennant's wonderful performance.
9/17/2008

Unknown said…
Well, thankfully, Russel is done after the end of these specials, so it's actually Stephen Moffat's decision to make.

Anonymous said…
The title is the LEAST of the problems with that snow white show. When I heard about it, I was sure it was a joke.
9/19/2008