Sound of Music: Designers Rock the Runway on "Project Runway" 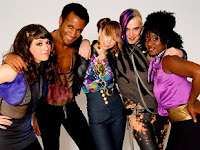 I feel like the judges really let Kenley off the hook far too easily.

On this week's episode of Project Runway ("Rock n' Runway"), the designer who has arguably become one of my least favorite people ever to appear on this series not only insulted mentor Tim Gunn with her childish and disrespectful attitude but also (A) blamed Leanne for not selling her ghastly garment on the runway and (B) argued with the judges--including LL Cool J--about what was "hip-hop" style and then denigrated the entire fashion influence by saying that she refused to put Leanne in baggy jeans and a backwards baseball cap.

It always amazes me when reality series contestants talk back to the judges or go so far as to cross a line into outright insulting them. Once again, Kenley has proven that she cannot get any criticism of any kind, can't listen to constructive feedback (a la Tim), and cannot step outside of her narrowly rigid design aesthetic (1950s dresses).

Yes, I do believe that sometimes you do need to stand up and defend yourself and your work but you also need to realize that each of these people--from Tim to Nina, Heidi to Michael--are successful for a reason and are likely far more successful at what they do than you will likely ever be. And as "cruel" as you think the judges are being, the press is far more savage. Do you really think that Michael Kors has never gotten a bad review for a collection? That the writer didn't pile on the vitriol? Wake up and get a clue, Kenley.

The judges should have sent Kenley packing this week and I'm amazed that they didn't, just for her outburst on the runway. Each of the designers this week had a difficult challenge to conquer: creating a music-inspired outfit for a fellow designer whilst modeling another designer's creation on the runway. Not an easy task, to say the least, but once again it was Kenley calling foul when she was called out by the judges for her awful high-waisted jean and leatha jacket combo that wasn't remotely hip-hop influenced. Do I think that Korto could have rocked a hip-hop design had she landed the genre? Sure I do, but I also think that any one of the designers could have done a better job than Kenley did.

The pants she created were truly one of the worst ever seen on the series, maybe second this season to Stella's atrocious pants from a few weeks back. (I can see now why Kenley sticks to dresses.) The print she selected for the tank was far too floral and screamed Kenley more than it did hip-hop. The leather jacket was pretty basic but okay and the overall look seemed messy and confused more than it did expensive and opulent.

I thought Korto did an amazing job with this challenge, landing punk and Suede as a model. Menswear is hard and vastly a different beast than designing womenswear but I thought Korto rose to the occasion and knocked out a kick-ass pair of distressed jeans that fit Suede perfectly (no easy feat) and looked absolutely punk, thanks to the application of bleach and some sanding. The top, the use of silver chains (embedded into the shirt itself) all came together to brilliantly reflect punk. Good job, K.

Also inspired by the challenge? Jerell, for one, who transformed dour Kenley into a popstar goddess, with a peek-a-boo fishnet dress, purple faux-fur mini-vest, and knee-high boots. Kenley looked every inch a popstar and this outfit could have been worn by Britney in a heartbeat; plus, he gets extra points for not making the garment seem raunchy but just sexy enough to work.

I thought Leanne did a better job than the judges did but agree that she could have pushed the design a little more into the glamour category than she did. But to me it definitely screamed country, with the detailing on the hem of the skirt, the sleeveless shirt pockets and back, and the neckerchief.

And then there was Suede. I had a feeling that the third-person-prone designer would be the one to get auf'd this week and, sure enough, I was right. His rock-inspired design, worn by Jerell, didn't bring the energy, volume, or spirit of the musical genre and did make Jerell look... rather like Jerell. While I was hoping that Kenley would be sent home for her rotten attitude, sadly I was disappointed on that front... though it is pretty amazing that Suede made it all the way to the final five.

Next week on Project Runway ("Nature Calls"), the four remaining contestants head outdoors, to design an outfit inspired by nature; Korto breaks down on the runway after a harsh critique; Jerell fights back tears; and Kenley's defense of her ugly garment turns, well, ugly.

Danielle C.F. Maris said…
I'm not an advocate of violence but Kenley needs a good slap in the face. I am so sick of her whining and moaning and general rudeness. Of course she thought she had the most difficult challenge but I think that Leanne's task, creating a tasteful country outfit, was much more difficult (but you didn't see Leanne crying about it).

Obviously Leanne, Korto, and Jerell deserve to be in the final three but if, somehow, Kenley makes it to Bryant Park I cannot wait to see her face when she learns that Tim Gunn is the guest judge.
9/25/2008

Anonymous said…
I agree with everything you said. :)

Especially regarding Leanne. Sorry, judges, but there was NO doubt this was a countrified outfit.

Every time Kenley talks, my ears bleed. I can't believe that a few weeks ago she was one of my favorites.
9/25/2008

Melissa said…
I'd say I agree with the judges about 50-60% of the time but boy, they blew it this week. When stuff like Kenley getting a pass happens, I absolutely am convinced that they keep certain people around for the potential conflict that will arise by having them there. It's very transparent.

par3182 said…
why did they waste all that time at the beginning culling models when they didn't even use them?