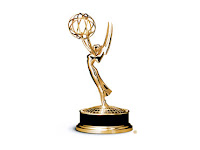 Reaction to this year's Emmy Awards--the 60th installment--wasn't quite what producers likely intended, with many critics--myself included--lashing out at the format, the hosts, and the distinct lack of scripted funnies. (Televisionary)

FOX has given a script order to workplace comedy The Station, about the employees of a covert CIA office in South America, from writer Kevin Napier, Fox Television Studios, and Red Hour Films' Ben Stiller, Jeremy Kramer, and Stuart Cornfeld. (Variety)

In other FOX news, the network has given a series order to Sam Baum's procedural drama Lie to Me, starring Tim Roth, Brendan Hines, Monica Raymund, and Kelli Williams. Project, from 20th Century Fox Television and Imagine Television, is about the fractious partnership between a former police officer who is a "human lie detector" (an expert in reading facial and body language that gives away deception) and a female clinical psychologist as they solve Washington-based crimes. I'm usually not a fan of procedurals but I found this to be a really compelling, interesting twist on a familiar crime-solving formula and a cracking script.

William Fichtner (Prison Break) and Sherry Stringfield (ER) have been cast in TNT drama pilot Night and Day from writers/executive producers Joel Surnow (24) and Todd Robinson. Project follows Dan Hollister (Fichtner), a middle-aged agent with the Bureau of Alcohol, Tobacco and Firearms who works for a special intervention task force as he finds himself drifting towards retirement age and dealing with upstarts half his age. Stringfield will play his wife Elizabeth, a stay-at-home mom. Night and Day will be in second position to Prison Break for Fichtner, whose deal expires at the end of the current season. (Hollywood Reporter)

CBS has renewed cop drama Flashpoint, which it co-produces with Canadian network CTV, for a second season; series hit a season high on Thursday night and gained 18 percent in the key demo over the last two weeks. No decision whether the 13 episodes will air during midseason or summer; production on Season Two begins in early 2009. (Variety)

In the resolution to one of the worst kept secrets in the entertainment industry, BBC drama czar Jane Tranter will move to Los Angeles to take a position as EVP of programming and production at BBC Worldwide, working alongside Paul Telegdy to oversee the company's North American production activities in LA and New York beginning January 1st. (Televisionary)

MTV has ordered Sex... With Mom and Dad, a sex-themed series for teenagers and their parents, featuring Dr. Drew Pinsky, who will help teens and/or their parents deal with issues related to sex, dating, and relationships. Series launches September 29th at 9 pm. (Hollywood Reporter)

Kathy Griffin has signed on for a fifth season of her Bravo reality series My Life on the D-List, following unsubstantiated rumors that the series would defect--like Project Runway--to cable rival Lifetime. (Variety)

Outbound Doctor Who showrunner Russell T. Davies has said that he would consider returning to the franchise if a feature film is greenlit. "I'd be very interested in going back for it," said Davies, who said the project will happen one day. "I think it could be lovely and could work as an idea. They did one in the 1960s and that worked and it didn't affect the TV series at all." (Digital Spy)

Sorry, GE, Rupert Murdoch has said that he's not interested in acquiring NBC or even smaller parcels of it though he does admire USA for being a "mature channel" that "makes a lot of money." (Hollywood Reporter)

Jennie Garth might not be appearing in any additional segments of 90210 after her original six episode commitment. "Nothing's confirmed at this point," said Garth. "It's still totally up in the air." Hmmm... (Entertainment Weekly's Ausiello Files)

I hope Fichtner doesn't leave Prison Break, he's one of the best characters, though hasn't really been given a chance to shine for the last series and the current series...