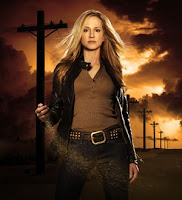 In a move that's hardly a surprise to anyone watching the ratings, TNT has renewed original series Saving Grace and Raising the Bar.

Saving Grace will air the back eight episodes of its 15-episode second season beginning in March; it will kick off Season Three with 15 new installments sometime later in 2009. Saving Grace averaged 4.4 million viewers this summer.

Raising the Bar has only aired three episodes to date (and has lost about 2.2 million viewers since the premiere) but that hasn't stopped the cabler from ordering a second season, which has been slated for sometime in 2009. TNT ordered 15 episodes of the Steven Bochco-produced legal drama.

No news on the fate of The Closer, which will wrap its fourth season in January, though a renewal for a fifth season is said to be in the bag and will be announced soon.