Guarded Rather Than Avant Garde on "Project Runway" 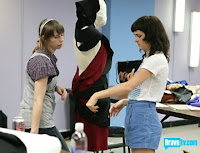 Sigh. I found last night's episode of Project Runway ("What's Your Sign?") more infuriating than enjoyable. After all, it hearkens back to my complaints from last season's avant garde challenge: why do most of these designers not seem to understand the term?

Before we get into any specifics, let's define avant garde so there's no confusion. The term avant garde (literally advance guard or vanguard) refers to works that are experimental or innovative and pushes the boundaries of what is typically accepted as the status quo. In fashion, it refers to works that are quite literally fashion-forward or representing ideas or styles that haven't been seen before.

Last season, during the avant garde challenge, duo Christian and Chris turned out what is to date one of the all-time best Runway designs, a floor-length ruffled dress with a train and an enormous oversized collar that screamed couture. It represented vision, drama, flair, and execution skills. It was definitely pushing the boundaries of the status quo... and the designers ALSO had to turn out a ready-to-wear version of the same outfit that embodied the same ideals but toned it down for everyday use. (Most of the designers completely missed the mark, however.)

Here, the designers again seem to have mostly missed the point of the avante garde challenge, turning out garments that were boring, predictable, or just ghastly (if Michael Kors describes your ensemble as a woman "pooping fabric," you know you're in trouble). I seriously sat there last night, scratching my head as I could not understand what went wrong during the concept portion of the challenge with most of these designs.

Their task was to work with one of the auf'd designers and create an avant garde look that was inspired by one of their zodiac signs. While it's certainly not the most intellectual challenge to date, it at least gave them some guidelines on which to base their inspiration for this mission, whether it was Aries, Leo, or Libra, and then use the characteristics of those signs to create something new and unusual.

What most of them created was either ugly (Kenley) or boring (Suede) or so run-of-the-mill originary that it seemed predictable and/or costumey (Joe). With two people up for elimination, I really thought that the designers would bring their A game to this challenge but I was really mostly disappointed with the results, save for the two fantastic garments created by Jerell (with help from Jennifer) and Leanne (aided by Emily).

Leanne, inspired by Scorpio, took the idea of the exoskeleton to a whole new level, devising black rigid curls of fabric that sheathed the model and formed an armor over and around her head. It was stunning, very avant garde, and showed that she and her partner not only worked well together but took the challenge seriously to boot. I thought it was definitely the most avant garde of the bunch but she could have taken the idea even further and bigger. I do wish that the dress had been beyond floor-length to give it that visual pop.

Challenge winner Jerell used Sagitarrius as his inspiration and offered up a lusciously detailed dress and coat combo that combined Empire waist, hobble skirt, and, well, fins (and flippers almost), as well as lush feathers and rich detailing on the sleeves. While I do think that it could have pushed the envelope just a little bit more to bring in more drama to the mix, I have to say that it was a stunning piece on and off the runway and I see why the judges sparked to it the way that they did... even though Tim originally hated the fabric choices.

As for the bottom, they were a motley bunch. I've grown so tired of the shrill, irritating, and increasingly defensive Kenley that I was hoping she'd get auf'd, even as I knew she would likely be spared the cut. I never understand why you'd look to irritate the judges and her defense that she doesn't "look at collections" was lame and pathetic; you're a designer: it's your job to know what else is out there so that you're not derivative or repetitive. Grr.

But I knew that time was most definitely up for Blayne, who really should have been sent home in the very beginning of this competition after creating so many sub-par garments yet somehow squeaking by each time. His design was truly awful this week and, yes, did look like his model was "pooping fabric," to quote the incomparable Michael Kors; there was nothing skillful or inventive about his design and the execution was amateurish at best.

I have to say that I have liked Terri throughout this competition, though she would definitely be difficult to work with during a challenge. I'm not surprised at the amount of friction encountered between her and Keith and I was not pleased that she didn't use him at all. Faced with standing around looking like a fool, he retired to the green room to sleep during the final hours of the challenge. (Did you see Tim's face when he discovered him in there?) I think that Terri's design was too literal from the start (the lion mane, really?) and she should have put aside her urban design aesthetic for this particular challenge to create something stunning and different rather than just another look.

I'm still not sure why the judges had to cull not one but TWO designers from the pack this week but I am happy that Blayne is now auf-licious. As for Terri, it is a shame but also a reminder that you are only as good as your last design and she really failed to deliver on this one.

As for the challenge as a whole, I kind of wish that, instead of having the designers work with ousted contestants from this season, they could have been paired with the awesome previous contestants the series' producers invited back to judge this week's challenge. How amazing would it have been to see Leanne work with Christian? Or Jerell with Daniel? Double sigh.

Next week on Project Runway ("Transformation"), the designers work with college-aged women who are about to enter the workforce and are tasked with creating sophisticated looks for their clients; Cynthia Rowley drops by as this week's guest judge, and Kenley creates yet-another 1950s-influenced dress.

Danielle C.F. Maris said…
I also found it frustrating that the designers didn't seem to understand the concept of avant garde. I really loved Jerell's ensemble but thought that the only person to truly capture the avant garde style was Leanne.

As soon as I saw Blayne's outfit on the runway I knew he was going home. It was a nude unitard with rainbow colored ruffles coming out of the crotch! Absolutely terrifying.

Terri proved that she does not play well with others, and this week's design was certainly her worst, but I still think they should have let her squeak by. At least her concept was more original than Suede's and her previous work has been much stronger.

Leanne is definitely the one to beat and I would be happy to see her win at Bryant Park.
9/11/2008

Anonymous said…
I don't know how much more I can take of Kenley. Every time she laughs it's like nails on a chalk board and she is so completely rude to the judges. It's one thing to defend you work and another to just be a brat who can't take criticism.
9/11/2008

Unknown said…
I agree with Danielle. Jerell's was pretty, but it was not avant garde in anyway. Leanne was robbed. I seriously fill with rage when Kenley opens her mouth. She has proved herself to be an insolent little child. She never listens to Tim and now she's talking back, rudely, to the judges. And as for Suede being in and Terri being out, I'm still pissed. And not just because it means I still have to hear him speak in the third person. His was the most boring and un-avant garde of all of the designs.
9/11/2008

Jennifer said…
I too liked the final effect of Jerrell's outfit but I don't remember how it was supposed to connect to Sagittarius...

Isn't the PR show at Bryant Park tomorrow? Does that mean there will be 6 collections shown? I always wonder why the timing couldn't be worked out better.
9/11/2008

par3182 said…
Apart from screentime, what motivation was there for the auf'd designers in this challenge? If there had been a chance for them to re-enter the competition they might have been pressed to push their ideas a little harder (giving us some more drama, if nothing else).

As it was, it just seemed like a wasted idea, as was the return of the designers from previous seasons who had little to do except vote without explaining their reasons.
9/11/2008