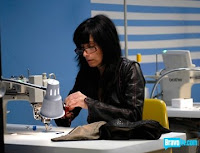 Last night's episode of Project Runway ("Double O Fashion") SHOULD have been an exciting, thrilling hour of television.

After all, the designers had within their grasp fashion legend Diane von Furstenberg, a truly amazing prize (the winner will get their design made and sold by von Furstenberg to American Express card members), and high-end fabrics the likes of which they rarely ever see (and after the "innovative" Saturn challenge from last week, you'd think they'd be champing at the bit)... so why was it such a lackluster performance from most of them?

I thought for sure that the designers would rise to the occasion and present some awe-inspiring designs on the runway, given that Diane von Furstenberg was a guest judge and was involved in the actual prize itself. If you're looking to establish yourself as a high-end designer, this is THE challenge to win, possibly just as important as getting that show at Bryant Park.

But, alas, most of the designers were either too star-struck by Ms. DvF or were shaken by the pressure of this challenge, turning in garments that were either utterly boring or just showed a real lack of inspiration. And when you're told to create something as part of a collection inspired by Foreign Affair and Marlene Dietrich's Erika Von Schluetow, a world traveler/spy in 1930s/40s Berlin, Shanghai, and New York... you better be bringing the drama. I can only imagine how much fun Christian would have had last season with this challenge and how inventive and original the results would have been.

I knew right off the bat that both Joe and Stella would end up in the bottom two. It's baffled me up to now how both of them have managed to stay in this competition; Stella's construction is sub-par unless she's working with "leatha" and I've yet to be impressed by anything Joe has done up until now, yet he walked through this challenge with an air of undeserved overconfidence.

There were really only two designs that wowed me at all. Leanne perfectly captured the look and feel of the 1940s with her gorgeous floor-length sapphire dress, overflowing with designer details (the ruffling on the back, the clasps at the shoulders, the plunging neckline), and a simple cropped jacket that screamed "period" but looked loose and modern at the same time. I knew that this would be the winning design and Leanne earned it, even with her immunity this week. She was really the only designer out of the pack to bring the "drama" and understand both Diane von Furstenberg's look book and the brief and deliver on her concept.

The shock of canary yellow really made Korto's design come to life. A black and white print halter dress and kimono-style wrap captured the essence of Shanghai but the yellow fabric underneath made the entire thing pop and added a modern, almost Miami Beach influence to the work that was very canny. Well done, Korto.

As for third place Kenley, I thought it was a well-made dress but wasn't wowed by it at all. It was a simple dress that showed some forethought but not enough. Had this maybe been a floor-length dress or one with a long train and haute couture collar (something with volume and drama), she could have walked away with the top spot but I knew that, as much as she wanted this (tears and all), she wasn't walking away the winner.

And then there was the bottom three. Suede's design was completely confusing to me and he didn't appear to get the memo that Stella got last week about making separate pieces that had no cohesion as an overall look. A ghastly green print dress that Suede claimed recalled camouflage ("I'm mad about camouflage," said the blue-haired designer in between air kisses) topped with a weird herringbone vest. Say what? A complete misfire.

I knew Stella would be there for her Berlin-by-way-of-Transylvania look with a poorly tailored pants-and-vest combo (even Michael Kors pointed out that "the crotch looks every woman's worst nightmare") and a bizarre cape that recalled not Dietrich but Dracula. I'm not sure what this was aiming for, but Ms. Stella completely missed the boat on this one.

And then there was Joe. For a guy so supremely overconfident in his abilities and design sense, you'd think he'd at least have the decency to construct something properly. But his awful Shanghai-influenced (but literal) design was poorly executed and planned: the skirt had an uneven hem, the belt was askew, the open back panel on the top looked messy and cheap. The whole thing looked kitschy costumey and not high end at all. Shameful, really.

Have the designers not learned after all of these seasons not to boast or brag about their designs... as nine out of ten times these very same designs end up in the bottom?

At the end of the day, however, as much as I was hoping it would be Joe who would be auf'd by Heidi, I knew that Stella's time on the series was up. And with a bizarre speech to Heidi and the judges about how her ego was "too big for the show," she thanked the judged and left.

Next week on Project Runway ("What's Your Sign?"), the designers are put into pairs and tasked with creating a garment inspired by their partner's astrological sign and some stargazing.

Danielle C.F. Maris said…
I would have been happy to have seen both Stella and Joe go. I knew it would be Stella as she's been on the bottom too often but Joe's garment was truly hideous.

I was really disappointed overall by the lack of creativity on this challenge. Leanne definitely deserved to win and Korto's dress was interesting and at least showcased some drama but everything else was mediocre, to say the least.

I am just thrilled that Kenley didn't win this challenge as I thought her dress was pretty but more like something you'd find at J.Crew than in von Furstenberg's stunning collection.
9/04/2008

Anonymous said…
"...tasked with creating a garment inspired by their partner's astrological sign..."