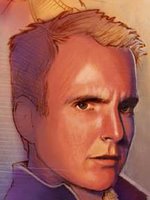 Via Screenhead, witness this soulful eulogy for quite-possibly-dead-but-never-forgotten show Arrested Development, entitled "A long time ago, in a Sudden Valley far, far away." Moving past the Star Wars homage, I especially love the little details: the seal that bit off Buster's hand, the little Monopoly piece in the form of a house (one of the show's motifs), George-Michael and Maeby in the Bluth's frozen banana stand, and of course, standing in for Star Wars' sexually ambiguous C-3PO, our very own sexually-ambiguous mandroid, Tobias, in his omni-present cut-offs.

Okay, awful pun there. But stop the presses, cancel the headstone, silence the fat lady. The New York Post is reporting today that Showtime has not only picked up Arrested Development but has actually ordered a full 26 episodes! (Which would be more than they produced in either Season Two or Season Three.) No official comment from Twentieth Century Fox Television (the studio behind Arrested Development), Imagine Television, or Showtime, but fingers crossed!

Astute viewers may have caught the geek shoutout to uber-writer Jane Espenson (Buffy, Angel, Firefly, The OC, Gilmore Girls, Tru Calling, etc.) on last night's episode of "24." Audrey, played by Kim Raver, used the alias "Jane Espenson" in order to trick an unsuspecting secretary into leaving her desk. While I don't watch the show (though with David Fury on the writing staff this season I probably should), anything that references the talented and brilliant Jane Espenson is a good thing.

Following the conclusion of its brilliant run Sunday evening on PBS' Masterpiece Theate, Bleak House, based on Charles Dickens' classic novel of long-buried secrets, power struggles, and spontaneous combustion, is available for sale and rental on DVD today. For those of you who missed the series (and shame on you if you did), here's your opportunity to see the whole gang: Lady Dedlock, Guppy, Esther, and the longest-running litigation ever, Jarndyce vs. Jarndyce.

While this season of Gilmore Girls has been rather hit-or-miss, when it actually does hit, it really hits. The past few episodes (mostly written by husband-and-wife team of Amy Sherman-Palladino and Daniel Palladino) have been pretty much pitch perfect and it wouldn't be a season of Gilmore Girls without heartache and romantic drama. Tonight, Rory learns that Logan wasn't completely, er, celibate during their brief break-up in the fall. Suprisingly, I've been liking Logan better since he was chewed out by his awful and overbearing father in the Valentine's episode on Martha's Vineyard.

I was briefly considering giving up on the show during last season's disastrous Family Edition (the Weavers alone were making me willing to change the channel), but was happy that the Linz family managed to win the crown at the very end. Tonight brings us back to the (working) format we've loved in the past: 11 teams of 2 on a race around the world. Expect a Rob-and-Amber level of backstabbing, squabbling couples, Phil continually defining what a "road block" is, and exotic and interesting locales--hopefully more exotic than, say, the gas stations, giant chairs, and bus depots that last season brought us.