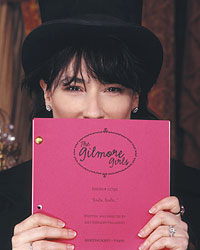 In a move that is less surprising than it is depressing, Gilmore Girls creator Amy Sherman-Palladino has announced that she is leaving the show that she created and guided over the last six seasons, reportedly turning down what was a nearly $5 million paycheck, according to Variety. Sherman-Palladino's husband, Gilmore Girls writer-producer Daniel Palladino, will also be departing.

The studio behind Gilmore Girls, Warner Bros. Television, immediately announced Sherman-Palladino's successor, Gilmore veteran Dave Rosenthal, who will step in as the showrunner for the long-running drama when it moves to the new CW network this fall. (Well, that bit hasn't been officially announced yet, but Gilmore Girls is pretty much a lock for the CW's fall schedule.)

Warner Bros. TV reportedly offered Sherman-Palladino and her husband a one-year deal worth nearly $5 million if she signed on for the seventh season of Gilmore Girls, most likely the drama's final season. However, both Sherman-Palladino and Palladino wanted a two-year deal, which Warner Bros. TV could not agree to since there are no deals in place for either the series or the cast to return after next season.

WBTV and the CW had the following to say, in an official statement released jointly by the studio and network:

"While we are disappointed that Amy Sherman-Palladino and Dan Palladino have decided not to stay with the show next season, we are very confident that Dave Rosenthal, an experienced writer-producer with the show, will make the transition seamless moving into the seventh year of Gilmore Girls."

I mean no disrespect to Dave Rosenthal, but most likely this season's finale of Gilmore Girls will be the last episode I watch. To me, the show is the supremely gifted love child of Amy Sherman-Palladino and Daniel Palladino. Combined, they have written more than 90 episodes of Gilmore Girls and it is those episodes in which the show, its many multi-layered characters, and its trademark dialogue truly shine. Without Amy and Daniel at the helm--as Gilmore Girls had been for much of this current season--the show just isn't the same. It feels lackluster and forced, instead of the show that I have followed and loved for so many years.

To Amy and Daniel, I can only say this: thank you for six magical years of wonderful, poignant, hilarious, and touching stories. And whatever you do next, I'll be watching.

pop-culture said…
I thinks this show stands a better chance if Lauren, Alexis and the cast are just given the episode premise then be allowed to improvise the entire episode. Lauren and Melissa are naturally funny and I'm sure after 6 seasons the rest of the cast can follow their lead quite easily because they are all very talented actors.
4/23/2006

Anonymous said…
I guess we'll have to see how the seventh season would pan out. =o)

Though I do admit that I am dissapointed that Amy and Dan are leaving...I would not write off the show in my viewing schedule (that is when I have time to view it)
6/03/2006

Introspectors said…
Years ago, we still feel the difference between the perfect and funny Amy's dialogue, and Rosenthal's. Amy rocks my world.
12/23/2013