Lindelof and Cuse to Get "Lost" For One More Season 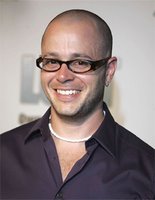 Looks like we might get to the bottom of the numbers mystery after all. The Hollywood Reporter is, er, reporting today that Lost executive producers and co-showrunners Damon Lindelof (left) and Carlton Cuse have both signed seven-figure deals to stay on board the hit ABC castaway drama through the 2006-2007 season.

Lindelof co-wrote the pilot for Lost with J.J. Abrams, for which he was nominated for an Emmy. He has so far written or co-written 15 episodes of Lost. Previously, he was a writer on the NBC drama Crossing Jordan, Nash Bridges, and the sadly failed Kevin Williamson ABC drama Wasteland. Lindelof is also the writer of the recent Marvel comic book mini-series Ultimate Wolverine vs. Hulk.

Cuse joined Lost in October 2004 and has written more than a half-dozen episodes of the show, including last week's "Lockdown," which he co-wrote with Lindelof. Before Lost, Cuse was the creator of several shows, including The Adventures of Brisco County Jr., Nash Bridges, and Martial Law.

Lindelof and Cuse, along with the show's producing team, received the best drama Emmy in 2005 and took home the best drama Golden Globe earlier this year.

No word if Locke and the other stranded passengers of Oceanic Flight 815 were happy to hear that Lindelof and Cuse will be tormenting them for another year.