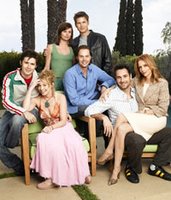 Last year, I saw the original pilot for What About Brian, the new ABC drama from executive producer J.J. Abrams (Lost, Alias, Felicity). I've spoken of that magical time that occurs each July when we receive the next season's ordered pilots at our office--frenzied days in which we watch and catalogue our thoughts and discuss the hits and misses of the following season.

At the office, we were all excited to get the chance to catch a sneak peak then at what we hoped would be a high point in the pilot binge: What About Brian. Suffice it to say, we were gravely disappointed. Perhaps our expectations were high. The show had the pedigree of coming from the production company (Bad Robot) of arguably one of television's current resident geniuses, J.J. Abrams. It had a likeable name-brand cast (7th Heaven's Barry Watson and Rosanna Arquette). Producer-writers Jeff Judah and Gabe Sachs (Freaks and Geeks) were attached. And it was being touted alternately as this century's thirtysomething or as a male-driven Felicity.

Here's the main plot. Meet our titular hero Brian O'Hara (Barry Watson); he's in his early thirties, good-looking, and has a faintly creative job as a video game designer. Oh, and he's single. Somehow, his entire group of friends--save him--has gotten hitched while Brian is still single and still trying to figure out what he's doing with his life. There's his friend and coworker Dave (Rick Gomez) and his wife Deena (Amanda Detmer), married with kids. They seem to have the perfect relationship but things have gotten so stagnant between them that they are discussing the possibility of an open marriage, which Deena seems to be way more into than Dave. Then there's Brian's sis Nic (Rosanna Arquette) and her much younger boyfriend Angelo (Raoul Bova); they're experiencing the heartbreak that comes along with a late-in-life pregnancy. Finally, there's Brian's frat-boyish best friend Adam (Legally Blonde's Matthew Davis) and his girlfriend Marjorie (Everwood's Sarah Lancaster replacing the original pilot's Polly Shannon), a pediatric surgeon whom he's been dating for two years and the object of Brian's affections. And then there's Brian, the self-proclaimed "seventh wheel."

Brian meets Karen (Felicity's Amy Jo Johnson, here only guest starring), a.k.a. Car Girl, whom he smashes into on the way to the movies. The two start dating and instantaneously she moves into Brian's apartment seemingly overnight. But Brian is a serial monogamist (which Karen can't seem to differentiate from serial killer) and, even though he's not interested in her, continues to date her. That is, until Adam suggests that he and Brian make a pact: Brian will break up with Karen and he'll break up with Marjorie, an idea which Brian loves as he, well, loves Marjorie (more on that later). So Brian tries breaking up with Karen, but the girl is seriously insane and kicks him out of his own apartment. Adam, on the other hand, doesn't exactly hold up his end of the agreement. Instead, Brian discovers that he and Marjorie aren't split up but rather engaged. Uh-oh. A situation which only gets more convoluted when Marjorie and Brian break into his apartment to extract his computer (don't ask) and end up kissing and then Brian races to Las Vegas to prevent the two lovebirds from getting hitched (they weren't).

For some reason, Brian and Marjorie seem to have this bond, a sort of romantic kinship that makes no sense except to the characters on the screen. Marjorie is supposed to be a highly intelligent, beautiful pediatrician, but I kept racking my brain to see what Brian sees in her (what she sees in Adam is another story; the guy is a tool). What About Brian's original Marjorie, Polly Shannon, was truly awful--unnatural, unappealing dead weight--but Sarah Lancaster isn't much of an improvement either. Her Marjorie is stiff, overly made up, and vapid and she and Watson's Brian have zero chemistry together, leaving Marjorie (again) as the weakest link in an otherwise stellar cast. (I seem to remember more going on with Rosanna Arquette and Raoul Bova's storyline, but here they're shoved into the background.)

It would help if we cared about any of these characters but for the most part they are either unsympathetic (Adam) or complete ciphers (Nic, Angelo). And while I loved Rick Gomez's performance as the put-upon Dave, it's Amy Jo Johnson (a J.J. Abrams veteran) who steals the show as the hilarious and twisted "Car Girl." (When your guest star is upstaging your regular cast, you might have a problem.) Meanwhile, Brian is stuck in a state of arrested development and, while this could be said of a number of thirtysomething single guys, Brian comes across less as introspective and wistful than whiny and self-absorbed. A male Felicity this is not.

Last night's episode of What About Brian was touted as the series' "sneak peek," while the episode ABC has scheduled for tonight has the more distinguished sobriquet of "series premiere." While I am not sure what that means exactly (did ABC realize that they needed yet another introductory episode?), I think I've already seen enough of Brian to last me a lifetime.

(That's 10 pm for you East Coasters... or Left Coasters who'd rather catch the later showing.) On tonight's installment of No Reservations, our man Tony sticks a little closer to home when he travels to Quebec, where he enjoys some foie gras at a duck farm (better alert PETA), takes in some hockey, and visits the Montreal Culinary Institute. I would kill to see Tony singing "O, Canada." Fingers crossed.

Another episode of 5 Takes: Pacific Rim, now officially known as my new favorite reality show. On tonight's installment ("Perth"), the kids travel to the western Australian city of Perth, home of glorious pollution-free beaches and several islands, including Penguin Island. Think they'll do the low-tide trek from the mainland to Penguin Island? I'd stake five Australian dollars on it.

Will I be watching this tonight? Um, probably not. But maybe I'll check out a few minutes before I make up my mind. On this new NBC reality series, "celebrities" including Tony Gonzalez, Alison Sweeney, Cindy Margolis, and that irritating kid from O-Town who now has his own MTV reality show compete in a cooking challenge with the help of a professional chef.

Over on CBS, on a new episode of Old Christine ("A Long Day's Journey Into Stan") Christine is still reeling from her unexpected breakup with Burton (she ended up breaking up with him instead of returning his "I love you") but insists she wants some time alone. Hmm, could that be guest star Andy Richter lurking over there?

Anonymous said…
Ugh - they were all so bland on that show. Yuck. What a terrible show. Amy Jo definitely the only thing worth watching.

I think it's sad when you call a show celebrity cooking showdown and I only know one of the three names you mentioned (and most likely would not have recognized the o-town guy).
4/18/2006

Brock said…
It was hard to get into WHAT ABOUT BRIAN but in the end I actually liked the pilot... I haven't seen the 2nd episode yet (which ABC is toting as the premiere), but I'm sure it will be a let down.

I have to disagree with Ally, I actually thought Amy Jo was irritating.

Let's hope that Bad Robot doesn't strike out again with its return of Alias this week (and hopefully gaining its creative strength back).