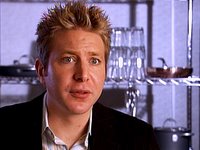 It was with special glee that I watched last night's episode of Top Chef ("Wedding Bell Blues"), hoping--nay, praying--that arrogant sommelier Stephen Asprinio would be the one to pack his knives this week. After last week's disastrous performance (in which he left the kitchen to fend for themselves while he "educated" the dinner guests endlessly about the appellation of the various wines he was serving), I'd run out of any patience I had left for the spiky-haired condescending Stephen, whose talents seem to lie in making a successions of itty bitty little tastes on a plate and droning on about the differences between rose glasses and white wine glasses.

The challenge last night was a difficult one and fraught with missteps: the chefs had 16 hours to plan and execute a 100-person sit-down wedding reception for gay couple Scott and Scott (no, not a typo there: they were both named Scott) from a menu designed by Lee Anne, whose inspired take on Pan-Asian cuisine impressed the Scotts so much that she won the Quickfire Challenge. No one, least of all Lee Anne, had thought that her ambitious menu--consisting of canape, amuse bouche, and four courses, including dessert--would actually have to be implemented. And it was quite an extravagant one: prawn toasts, a selection of Asian appetizers for an amuse bouche (spring roll, soup dumpling), salmon perched atop a green papaya salad, a lovers' nest of seafood and veg (complete with Origami cranes on the plate), Peking-style beef with crispy scallion pancake, etc. Oh, and did I mention they'd have to do a wedding cake as well?

That's where things started to drastically awry. Opting to use store-bought cake mix (shudder) as a base for Lee Anne's ginger and vanilla scented cake with passionfruit curd and white chocolate genoise, the team believed that they were going to squeak by the perils of wedding cake making. Instead, they ended up with a beautiful-looking cake (which Lee Anne decorated gorgeously with orchids) but which was far too sweet... and contained eggshells!

The chefs pulled an all-nighter to prep for the reception but the gang was soon exhausted and drained from the strain and stress. (Didn't any of them ever have to pull an all-nighter in college? It's called coffee, people. That and Jesse Spano's infamous Keep Awake pills.) Tensions were frayed and some (i.e. DAVE) overextended themselves and typically didn't end up doing anything all that well, having spread themselves so thin, or so says Tiffani. As the service dragged on, each of them started to slip up and the food they sent out was so subpar that it was embarrassing. Dave's prawn crackers--while apparently delicious according to the guests--were overly greasy; Harold's salmon and green papaya salad was a complete and utter disaster along the lines of the Hindenburg: cold and flavorless, a bland melange of noodles, papaya, and nearly inedible salmon, it drew the wrath of guests and judges alike.

Meanwhile, Stephen remained so Big Picture-focused that he failed to see the details, in his usual fashion. So much so that he neglected to wash any of the packaged plates or Asian spoons for the amuse bouche course he was supposed to be serving, which the chefs discover as they start plating the dish. As the chefs scrambled to serve his course, you might ask: Where was Stephen? Why, he wash at the front of the house, of course, training the wait staff (as the dining room captain looks on with a bewildered expression, from the sidelines) on how to pour the wine, which glasses to use, the origins of the wines they are serving, how to sweep the dining room whilst serving.

It's all very unnerving to me. Yes, service is an important part of any fine dining experience, but Stephen seemed typically confused about what the task at hand was. Again, the show is not Top Maitre d' or Top Sommelier. Why wasn't he in the kitchen helping on the line? Especially as there were four people (FOUR) preparing food for 100 guests in the next room. Stop pretending that you're liaising with the front of the house (which resulted in the beef dish being plated too soon, thanks to Stephen) and focus on, you know, actually cooking. I know it's a novel concept and all, this being Top Chef, but I think impressing the judges with your aptitude in the kitchen rather than the dining room might have been a good idea. Especially since Tom Colicchio had just called you out on your behavior the week before.

Fortunately, the judges had had enough of Stephen's weasely ways and sent him packing (though of course Stephen was confused and offended that anyone dare think of him as anything other than the best of the best), leaving only Dave, Lee Anne, Tiffani, and Harold remaining in the game. Next week, one more will be sent home, before the season finale showdown in Las Vegas, where three chefs--hopefully Lee Anne, Tiffani, and Harold--will battle it out for the dubious title of Top Chef.

I can't wait for the next course.

On tonight's very special episode of Everybody Hates Chris ("Everybody Hates Playboy"), Chris discovers dad Julius' Playboy magazine and brings it to school, only to have it first end up in the hands of a bully before being confiscated by the principal. Chris better not admit that it belonged to Julius or Rochelle is gonna whup his ass.

A second airing of one of my favorite--if not THE favorite--episodes of My Name is Earl. On this repeat ("Stole P's HD Cart"), after Earl returns the hot dog cart he had stolen from beloved local food purveyor Pop, Ralph (guest star Giovanni Ribisi) is paid by Pop's competition to set fire to the cart. Features one of the best Joy scenes ever. You'll know which one I am talking about.

A half-hour later on a brand new episode of Earl ("Stole a Badge"), Earl tries to return a police badge that he had stolen a few years earlier only to be bowled over by the police. Get it? Bowled over? As in bowling ball? Oh just shut up and watch the episode.

The Office returns with a new episode tonight ("Drug Testing") that looks absolutely hilarious. When Dwight discovers half a joint in the parking lot, he launches a full investigation and everyone in the office falls under suspicion. I think it belongs to Ryan. He does always look shifty.

i've never seen you list an evictee of TC here so I didn't think I had to shield my eyes. Whatever - I am thrilled!! I really hated him. That'll teach me to watch VM.

No, really, I was sitting on the couch with just enough time to watch TC or VM and I almost clicked on TC and made a last minute decision to watch VM. Damn!!
4/27/2006

Anonymous said…
Yes! Finally, that smug bastard is gone. Although, after listening to his final diatribe about becoming a restauranteur and "raising the bar to a level that hasn't yet been reached in this country", his ousting didn't seem to take away any of his pride or confidence. This guy must NEVER get laid.
4/28/2006

Anonymous said…
I think the best part was when he was asked if he had anything to say and he said, "No." You ass. Everyone else said a variation on "Thank you for the opportunity."

Ok, that was the second Jessie Spano reference in two days. Was the other in your blog, too? If not, that's just weird. And I wouldn't have known who that was except the other place mentioned it.
5/02/2006