Don't ask me why I've resisted the pull of the Sci-Fi Channel drama Battlestar Galactica for quite this long. It might have something to do with the almost religious obsession my co-worker maintains for the show, which knows no bounds. I'm not much of a sci-fi geek. I was never into Star Trek in any of its zillion permutations (ST: The Next Generation, Voyager, Deep Space Nine, or... the rest) and have only recently discovered Doctor Who as a valid entertainment option. So forgive my ignorance then, as I've never seen the original Battlestar Galactica that the new series is based on.

On a whim last weekend, I decided to Netflix the 2003 mini-series of Battlestar Galactica and see what all the fuss was about, as the show recently wrapped its second season on Sci-Fi last month (well, what the network is calling Season 2.5, anyway). And something magical and rather mysterious happened: I was instantly hooked. Not just hooked but sucked into the drama, which was far more dark and less campy than I had previously imagined it would be.

If you're new to Battlestar Galactica (or BSG as its devotees--or at least the acronym-friendly--refer to the show), here's the basic thrust: humans live on twelve planet colonies in a distant galaxy. Forty years ago, they barely escaped a war with the worker robots that they built to serve them but which had risen up and revolted against their masters: the Cylons. After the war, the Cylons and Humans formed a truce and the Cylons have not been heard from since. Until now. With cunning precision, the Cylons attack an orbiting space platform and then launch a simultaneous attack on the twelve planet colonies. The Cylons attack with brutal savagery and overwhelm the humans, crushing the interstellar fleet and stranding 50,000 survivors, whose only line of defense is the Battlestar Galactica, a huge space fortress/battleship that is about to be decommissioned and turned into a museum.

However, the Cylons have managed to evolve into a humanoid form and they can mingle with an unwitting public. Their mission: to exterminate the humans, their former oppressors. One of these newer model Cylons (there are 12 models of these human-looking robots) is the beautiful and deadly Number Six (Tricia Helfer, left). Two years earlier, Number Six seduced and gained control of one of the colonies' most brilliant scientists and thinkers, Gaius Baltar (Bridget Jones' James Callis), who unknowingly allows her to penetrate the master defense mainframes. Gaius doesn't ask too many questions about what she wants with the mainframe and is far too obsessed with Number Six, who is as sexually insatiable as she is power-hungry. Too late, Gaius learns of Number Six's true identity and their affair directly causes the nuclear attack on the twelve colony planets but Number Six is able to save Gaius from death and he ends up a passenger on the Battlestar Galactica.

Aboard the Battlestar Galactica, Commander William Adama (Edward James Olmos) scrambles as he discovers the Cylon attack. In fact, Adama soon learns that the entire fleet has been destroyed, leaving him as he fleet's most senior officer. The fact that the Battlestar Galactica escapes destruction is due to the fact that Adama always opposed linking the ship's computers to a network; that loophole allows the earlier-model fighter jets and the Galactica to resist the virus-like programming with which Number Six infected the mainframe.

With the death of the president of the colonies--and his entire council--education secretary Laura Roslin (Mary McDonnell) is quickly sworn into office as the president of a species on the brink of destruction--and quickly becomes a thorn in Adama's side. (Did I mention that she is also secretly dying of an advanced cancer?) However, Laura has an ally in the form of Adama's prodigal son Lee 'Apollo' Adama (Hornblower's Jamie Bamber, below), who is harboring a deep resentment towards his father after the accidental death of his pilot brother, who was the lover of Apollo's hotheaded friend and fellow soldier Kara 'Starbuck' Thrace (Katee Sackhoff). Together, they set off to find the 13th legendary colony of man: a distant planet called Earth, where they can repopulate the human race.

Meanwhile, Gaius attempts to settle into his new life aboard the Battlestar, but he is haunted by visions of Number Six, whom implanted a microchip inside his head post-coitus. Number Six has her own agenda and she leads Gaius to uncover a Cylon device secreted aboard the ship and urges Gaius to implicate a potential human threat to their/her mission by denouncing them as a Cylon. While there are twelve humanoid Cylon models, some of these units are sleeper agents, unaware that they are in fact not human not Cylon and they are able to be remotely activated. We come to learn the identity of four models in the mini-series, but I am not going to spoil that for any viewers who haven't seen the show. Believe me, the reveal of the forth is a doozy. 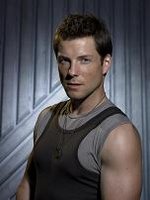 I found BSG to be much more gritty and realistic (well, for a futuristic show about a war with a robotic race, anyway) than I had imagined it would be. And for a post-9/11 audience, there is a certain political undercurrent that cannot be ignored; while I was watching I kept finding various allusions to the current geopolitical climate that I was surprised to discover in what many would consider to be a sci-fi genre show. The mini-series kicks off the show with a tone that is dark and harrowing but with a human side as well. It is smartly written and cleverly plotted and, considering there is such a large cast, the characters are instantly sympathetic and recognizable. It's their interactions and interpersonal relationships that drive the humanistic side of the story while the battle between the humans and Cylons (and trying to figure out who the Cylon sleepers are) will satisfy the sci-fi geek in all of us (hell, even my girlfriend is a convert now and she is totally not your usual sci-fi'er).

All in all, while the story hooked me, it's the characters that are going to keep me coming back: the animosity between Apollo and his father Adama; the pull between matters of state and military interest (represented, of course, between Adama and former "schoolteacher" Laura Roslin, now the president of the colonies); the feelings of guilt and lust Starbuck has for Apollo, the brother of her dead former lover; Gaius' moral bankruptcy; and the very twisted relationship he has with the Cylon Number Six.

Fortunately, I've got two seasons of BSG to catch up on and I cannot wait to see how things develop. Will the refugees find Earth? Or will the Cylons destroy the race altogether? (Somehow, I doubt the latter, otherwise there wouldn't be much of a show.) But regardless of what happens, BSG has a newfound fan in me. I've already Netflix-ed the next disc in the series and what can I say? I'm now officially a sci-fi geek.

The Friday night routine continues: High Spirits with Shirley Ghostman only gets more outrageous with each passing week; Little Britain continues to satirize, spoof, and generally poke fun at the zany antics of Britishers, and while Creature Comforts captures the thoughts--and words--of real-life British people and then transforms them (the people, not the words) into animated clay animals. Sounds... odd, I know, but it's brilliant.

Can I just say how much I am loving Doctor Who? And I am super-excited for tonight's episode in particular. On tonight's installment ("Dalek"), a collector possesses the last remains of the Doctor's deadliest nemesis. One guess what that is. Could it be... the Daleks? Why, yes, yes it is.

Anonymous said…
It's not a regligous fervor! "So say we all!"

Now can we convince the network to start season 3 in July instead of October?
4/14/2006