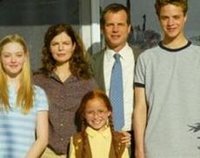 I am officially a convert. Or, given that Big Love is about a polygamist, his three wives, and their many kids, let me phrase that slightly: I am a convert to Big Love, the HBO drama. While I was initially enthralled by the show, I wasn't sure whether the attraction was a passing infatuation or something bigger than that. Now, five episodes into the series, I can honestly say that each week I look forward to the exploits of the Henrickson family with something approaching a growing zeal.

The show has managed to juggle several dramatic balls up in the air at the same time. Bill (Bill Paxton), constantly caught between soothing his bickering wives and satisfying them, secretly continues to take Viagra. Speaking of secrets, shopaholic second wife Nicki (Chloe Sevigny) has accumulated nearly $60,000 in credit card debt and when her frightening cult leader dad Roman (Harry Dean Stanton) gives her $3000 to pay for half of one of those bills, Nicki promptly blows it all on clothes. Meanwhile, Bill's son Ben (Douglas Smith) has been having problems dealing with his burgeoning sexuality and enters the ministry to cleanse himself while Bill's daughter Sarah (Amanda Seyfried) continues to bristle against her parents' polygamy and grow closer to her friend Heather (Tina Majorino), the daughter of a state trooper. To top it off, Bill's war with Roman seems to be heating up as he and co-worker (and fellow polygamist) Don Embry (Joel McKinnon Miller) tip off the state attorney general to some shady business dealings of Roman's... dealings that Bill's brother Joey (Shawn Doyle) may unfortunately be tied up in as well.

Whew. Suffice it to say, there's a hell of a lot going on in the Henrickson homes, especially for a show that many predicted could be one-note before its premiere. Instead, Big Love has easily delivered my new Sunday night fix and is a worthy successor for title of best warped domestic drama since, well, Season One of Desperate Housewives (which long-time readers will know I gave up watching halfway through this season). It's edgy and provocative, consistently thought-provoking, at times hysterically funny, and completely twisted, all wrapped up in a story about the strangest blended family ever on television.

In last night's fantastic episode ("The Affair"), Bill begins a secret "affair" with beloved first wife Barb (Jeanne Tripplehorn, easily in her best role ever) but when Nicki twigs to the notion that he's secretly seeing someone, she thinks Bill is about to invite a fourth wife into the family. And when she finally discovers the truth, she steals Bill's attention away from Barb by announcing (or claiming) that she's pregnant again. Meanwhile, third wife Margene (Ginnifer Goodwin) is lonelier than ever and begins what will undoubtedly be a doomed friendship with nosy neighbor Pam (guest star Audrey Wasilewski), a move which could expose the entire family. While Bill and Barb sneak out one night for an illicit rendezvous at a local motel, Nicki's creepy brother Alby (Matt Ross)--one of her 18 brothers, that is--shows up at the houses looking for Bill... and some payback for the humiliation he received at the hands of dad Roman for Bill's interference. (The scene where daughter Tiny turns on the outside light to see him standing there menacingly gave me chills...) Alby threatens the family, even tightly wrapping his hand around Ben's throat, until tough girl Nicki shouts some sense into him.

But before he leaves, Alby solves one of the show's mysteries: namely, why Bill married Nicki in the first place. According to Alby, Bill only married Nicki in exchange for a loan from her dad Roman; Nicki was just "collateral." And that loan, as we know, was for Barb's cancer treatment... So, do I smell trouble in the polygamist Garden of Eden?

Wherever Big Love's characters end up, you can bet that it will be someplace unexpected, rather twisted, and wholly engaging. And that, no matter what route the show's writers take, I'll be along for the ride.

In tonight's episode of travel show No Reservations ("Peru"), sarcastic chef Anthony Bourdain begins a quest for enlightenment (Did I read that right? Enlightenment? For Tony?) in Peru and encounters the indigenous Eseeja tribe.

My new favorite reality show. On tonight's installment ("Great Barrier Reef"), the gang sets out for Australia's Great Barrier Reef, where they explore the coral reef and rainforests and go white water rafting in Cairns. Having been to Cairns and the Reef, I can say that they are in for one hell of a treat. Australia's Gold Coast is probably one of the most beautiful and ecologically diverse places on Earth. Enjoy, kids! And Josh, behave... I've got my eye on you.

I am amazed by how much I am continuing to enjoy this show. Julia Louis-Dreyfus has really come into her own in this role, her most vivid and fully drawn since Seinfeld's Elaine. Tonight ("The Other F Word"), nothing usually goes right for Christine, so when she tries to promote diversity at her son's posh private school, she really shouldn't be all that confused when things go horribly wrong.

Gee, lucky us. We get two (TWO!) episodes of The Apprentice tonight. (What, did NBC not want to slot in a three-hour Deal or No Deal tonight?) Is it just me or has Apprentice this season been as dull as.... dishwater? (Dishwater? See, Apprentice is even destroying my wordsmithing abilities now.) I'm not totally sure I can manage to sit through two whole hours of this nonsense. In tonight's first episode ("It's More Than Decor"), the teams design themed activity centers for a national children's charity, in a typical repeat of the usual renovation project. In the second episode ("A Slice of Heaven"), the challenge is to launch a new pizza sandwich (ew!) convenience store chain. Meanwhile, there's a bit of a switcheroo when one candidate switches sides to assist the losing team. Meh.

Elle Darcy said…
I don’t have HBO and I haven’t watched Big Love, but I did see some previews online and it sort of made me feel sick to my stomach. Maybe it's because I'm a married woman, but the idea of sharing my husband with two other women just seemed so incredibly awful to me. I guess I just feel rather traditionally about the whole monogamous marriage thing that I can't really get behind a character who has problems because of his multiple wives and his crazy cult-esque father-in-law.
4/10/2006

Anonymous said…
Well, I am finally caught up (just in time for ep 6), so I can comment now.

Yes, I think this show gets better every week and this week's, with Barb and Bill's "affair," was the best yet.

I am very glad they put gave us that "collateral" nugget, since I complain every episode about how whiny and annoying Nikki is, and why did Bill marry her. I keep thinking that in season 2 we will get a backstory ep on all 3 wives. Very curious how/where he met Marjean.

And I love that this show is a VM reunion show. :)

But Harry Dean - he is the best. I love his scenes.

Do you think it's written into Bill Paxton's contract that we have to see his naked ass once an episode?
4/16/2006