An Open Letter of Apology to Jackie on "Veronica Mars" 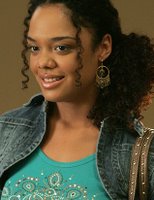 I can admit when I've made a mistake. It's difficult for me to say this, but I may have misjudged you. And, yes, I did make a snide comment about you in yesterday's What I'll Be Watching section, but what can I say? You've definitely grown on me since your initial appearance on Veronica Mars.

I used to think that you were a callous, uptight, spoiled little brat who loved to torment Veronica and twist her BFF Wallace around your little finger. You thought you owned Neptune High. But hard times can change the best of people and you've changed since your baseball legend dad Terrence Cook was (wrongfully) arrested for the mass murder of a dozen people in the bus crash. In fact, it's been wonderful to see you acting downright human for once. Could it be that you've grown a conscience?

Okay, that was a little harsh. I didn't mean to imply that you didn't have a conscience before, but maybe it was buried under all your posturing. Like the time you set Veronica up for a nasty fall by getting her on a local psychic television program. Or tried to hit on Veronica's ex-boyfriend Logan at the dance, just to get a rise out of our favorite teenage sleuth.

But since Daddy got arrested, you've become so loathed at school--even sitting alone at lunch-- that you've made Veronica look like Miss Popularity (which, believe me, is a pretty difficult feat). Which in turn has earned some respect and a little bit of trust from Veronica. You haven't buckled, you haven't succumbed or shattered from the stares and torments and vicious comments of the Neptune High kids. You told Wallace not to sit down with you at lunch because you didn't want the rep of being the maneater who stole Wallace away from one of the nicest girls in school... and even gently pushed him away when he tried to kiss you. And, oh, did I mention how incredibly cool and thoughtful it was that you invited that mentally challenged teen to the Sadie Hawkins Dance? Major points in my book, Jacks. And Veronica's too, apparently. While there's still a ways to go between you two, it seems like you and Veronica are settling into a relationship that might become something akin to friendship...

So from the bottom of my heart, I apologize for anything I've said that could have upset or insulted you, Jackie. You've changed and since your transformation, I like you.

Which doesn't mean that I've closed the book on you yet. If you do something cruel to Veronica again, I'll come down on you so hard--

But for now, can we just say "truce" and leave it at that?

Jace Lacob said…
Amen to that. As I was watching, I kept thinking, they didn't just chain him up in the stadium that is about to be imploded, did they? Oops, I get they did. Thumper went splat... ;)
4/09/2006