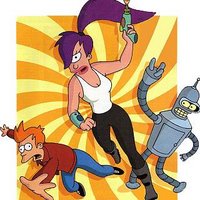 Comedy Central, which previously bought the rights to air 72 Futurama episodes last fall, have now pacted with studio Twentieth Century Fox Television to air 13 brand new episodes. The episodes, which will feature the voice talents of series stars Billy West, Katey Sagal, and John DiMaggio, will soon begin production and are expected to air on the cable network in 2008. Really? 2008? Wow. I knew that animation took a long time to produce, but that's a long time to wait for some new Fry and Bender material.

Showtime has decided not to renew the critically acclaimed dramedy Huff, which stars Hank Azaria as a disturbed psychologist. Oliver Platt and Blythe Danner also starred. The news comes as Huff concludes its second season on Sunday night and is surprising in light of the seven Emmy nominations that the show received for its freshman season.

FOX Gets (Typical) Jump on Fall

As anticipated, Fox will launch their fall schedule in advance of the baseball playoffs, with no less than three nights of original programming in rotation before Labor Day. The layout schedule is as follows:

While it's great that FOX is launching its new and returning series during the summer's eleventh hour, I'll be holding a poll to see which new cult and critically acclaimed series will get shafted by the network first, a la Firefly, Wonderfalls, etc.

For those of you looking to get your fix of wealthy suburban housewives pretending to read the works of Gustave Flaubert or, well, Gigi Levangie Grazer, you're out of luck as CBS has pulled low-rated reality series Tuesday Night Book Club after only two airings. The network will instead air repeats of 48 Hours Mystery in its place. And it's no mystery that more people will probably tune in to catch that.

BBC America's Underground block of programming welcomes a new addition to its lineup, the 1999 sitcom Spaced which stars Shaun of the Dead's Simon Pegg. In the first episode ("Beginnings"), Tim (that would be Pegg) and Daisy are forced to pose as a couple in order to rent an apartment. On the second episode ("Gatherings"), Daisy and Tim decide to host a party. Personally, I can't get enough of Simon Pegg, so I am so there.

Later on BBC America, the network is reairing the second season of the brilliant Britcom Black Books, which stars Dylan Moran and Bill Bailey. In the second season premiere ("The Entertainer"), Bernard falls in love while Fran takes up the piano. Just trust me and watch it, you'll thank me in the morning.

Later still on BBC America (catching a theme here?) is the second season premiere of The Catherine Tate Show. Who's Catherine Tate? Why, she might just be the heir to Tracy Ullman's sketch comedy throne.

Anonymous said…
The timing of the new episodes of FUTURAMA probably has a lot to do with when Comedy Central gets the syndication rights to the old episodes from Cartoon Network.
6/23/2006