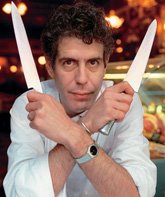 I was feeling a bit glum when I noticed (via my TiVo's To Do List) that tonight's episode of Anthony Bourdain: No Reservations would be the last original episode for a while. Bourdain's show is, after all, the highlight of my Monday evening television. So I was quite excited to run into Tony himself yesterday morning at the Hollywood Farmers Market (the one on Ivar), signing copies of his latest book, "The Nasty Bits: Collected Varietal Cuts, Usable Trim, Scraps, and Bones."

Anyone who watches No Reservations (or has read "Kitchen Confidential") knows that Tony is not the most, um, people-friendly person around. So it was quite a sight to see the man that once ate a cobra's still-beating heart looking a little out of his element: too-wide smile plastered on his face, posing for the cameras, greeting fans, and signing copies of his latest book. You could tell just by looking at him that he was simply dying inside for a cigarette. Or a large drink. Or both. But Tony Bourdain, celebrity chef, television host, and author is, above all else, a professional and I have to say that he was a great sport about the whole thing. Especially considering that he arrived at the farmers market at 9 am, had to sit in the sweltering heat, and had another engagement at 2 pm across town. This man deserves a medal.

Tony confirmed my worst fears: yes, tonight's installment of No Reservations would be the last for a little while as the Travel Channel will most likely air a selection of repeats from this season in subsequent weeks. I also asked him if he was going to check out any restaurants during his trip to LA. Tony said that he probably won't be able to venture "off of campus" and unfortunately the only meal he'd have time for on this leg of his tour would be "some Pringles from his [hotel] mini-bar."

Tony signed my book with a flourish and a nifty little drawing of a chef's knife. I think it's fitting that the man who has traveled around the world and eaten some pretty, um, interesting animal organs along the way would name his latest book "The Nasty Bits." While he may have ingested quite a lot of nasty bits himself, there's happily nothing nasty about Bourdain himself.

So while No Reservations might be airing repeats from here on out, at least I'll still have Bourdain's trademark acerbic wit, in the form of his new book, to keep me company on Monday nights.

UPDATE: The Travel Channel has confirmed that new episodes of No Reservations will make it onto the airwaves in January 2007, with Tony traveling to such diverse locales as Ireland, South Africa, Beirut, and the Pacific Northwest.

On tonight's installment ("9 Chefs"), Gordon Ramsay is forced to watch as the two teams continue to struggle, a fact which isn't helped that the men and the women are squabbling like little kids on a playground. Maybe you should stop talking trash and shape up, kids. Or you can just pack your knives and go. (Who else has missed hearing that?)

See above. In this week's installment ("Indonesia"), Tony heads off to Indonesia in the final episode of the Travel Channel favorite (for now, anyway). Sniffle.

On tonight's episode, executive producer Eric McCormack calls in a favor from former Will & Grace castmate Sean Hayes, who guest stars as a man looking to find a new love of his life after the, um, tragic death of his wife.

Anonymous said…
I can totally picture him looking uncomfortable. And it was DAMN hot yesterday (or so says the sunburn I got from being in the sun for only about 40 mins). Very sad that it's ending for a while. Good thing I missed some, so I can play catch up. Korea last week was really interesting.
6/19/2006

Unknown said…
AB did go to Los Angeles for one of his "Cook's Tour" shows on the Food Channel. (I think it aired on 6/26.) I am not sure if I should thank him or pray that some harm comes to him. Maybe he's just like some many of those obnoxious NYers that think LA is beneath them. He insulted me and the city I live in by spending his 1/2 hour of airtime eating at 3 lousy hot dog dumps, eating a donut at a donut shop that no one goes to unless they have to, and then, eating at a all-nighter burger joint with the chef of Campanile - a fabulous restaurant that AB was supposed to be the executive chef of for the night (he did absolutely no cooking and the sous chefs appeared to have looks of disdain on their faces). He didn't even eat the food there. He did manage to get to the well-respected fish market and Santa Monica Farmer's Market. First let me tell the world that LA has some fabulous restaurants representing cuisines of the world. Secondly, unlike NYers, we do not subsist on hot dogs for lunch, if we eat them AT ALL. If he wanted some good street food, he should have found a Mexican dive (since people in NY really don't know how to prepare it and cannot appreciate the authenticity of it here in Los Angeles). Again, not sure if I should thank him for doing such a poor job of sharing the culinary world of LA with his viewers. Guess I will, though. Maybe he discourage even a few tourists from coming here.
7/06/2008