"Lucky Louie" Could Use More Humor Than Luck 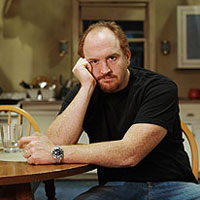 I had high hopes for Lucky Louie, HBO's answer to the traditional sitcom of yesteryear. After all, HBO had redefined the television drama and sitcom, dazzling us with such forms as the mobster drama, the family drama, the single girl in the city dramedy, and, um, the western cowboy drama. But could HBO pull off a traditional sitcom? I was curious to see how it would hold up, given the pay cabler's typically high standards. After all, as they say, it's not TV, it's HBO.

Coming on the heels of a small renaissance of single-camera comedies like Arrested Development, Scrubs, The Office, and My Name is Earl, HBO's Lucky Louie is a throwback to the artificial lighting and three-sided set design of the classic multi-camera sitcom. And yes, it even is filmed before a live studio audience, as we're reminded at the start of each episode. I only wish the audience would stop cackling at every f-bomb dropped by the show's star, stand-up comedian Louis C.K. They really shouldn't encourage him like that.

Series creator Louis C.K. is the titular Louie, a downtrodden family man in a low-rent neighborhood whose few pleasures involve, um, pleasuring himself to Jessica Simpson in the kitchen closet and attempting to prove to his black neighbor that he's not a racist. Neither venture usually goes over well, particularly because Louie is, well, Louie. He's a loser but there is something somewhat lovably earnest about the guy. At least, his wife Kim usually thinks so. She's played by King of the Hill's Pamela Adelon, but there's something off about her performance. Kim is a little too shrewish and not nearly as likeable as she should be. The audience should sympathize with Kim's position but instead there's a bit of disconnect going on. Rounding out the cast: Michael Hagerty and Laura Kightlinger as married couple Mike and Tina, Jerry Minor and Kimberly Hawthorne as put-upon neighbors Walter and Ellen, comedian Jim Norton as Louie's drug dealer pal Rich, and the adorable Kelly Gould as Louie and Kim's precocious daughter.

There's an odd juxtaposition between the almost 1970s-style set--flimsy, dark sets for Louie and Kim's apartment and their building's hallway--and the amount of graphic profanity (shock!)and even male nudity (gasp!) that the series features. The pilot episode definitely threw me as I wasn't quite sure what to make of it, but the series' second episode showed a little more promise. I just wish that the show's writers wouldn't rely so heavily on the novelty of being able to swear and show some full-frontal manhood. An ongoing sitcom's comedy needs to come from an emotional or intellectual place rather than just pure shock value. While you definitely can't catch any of this on network television, it doesn't mean that Lucky Louie is pushing the boundaries of what you can and can't discuss in a traditional sitcom format. Swearing does not make something automatically hysterical. While I am far from offended, I was hoping to be challenged or provoked by such a daring premise.

HBO's tagline for Lucky Louie reads, "The end of the sitcom as we know it." While that's a little too much hyperbole for my taste, I was hoping that Lucky Louie would take something old and give it a new twist, recycling a format that many see as outmoded and outdated. But for a show that promises such bite, this is no wolf in sheep's clothing... or even in Salvation Army garments. If Lucky Louie is going to succeed, the show needs to grow beyond the childish zeal for saying dirty words and start saying something worth hearing.

Anonymous said…
Louis C.K. is a great comedian and I was hoping for something more from "Lucky Louie." I kind of like the 70's style sets and old school set up but agree that too often the show relies on cursing or dick jokes for a laugh. When they do hit the mark, it's extremely funny. But, unfortunately, those moments are few and far between.
6/23/2006

T.L. said…
A lot of people like to complain about the over-use of profanity in this show, but I've seen Louis C.K. live several times, and well, that's just who he is. He swears a lot. Big deal. I think you're complaining more about the audience reaction than the actual use of profanity.