The “Doctor” Has Left the Building 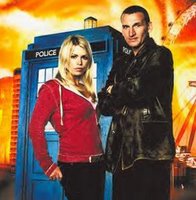 It’s with more than just a little sadness that I bid farewell tonight to the newest incarnation of British cult classic Doctor Who, which airs its first season finale this evening on Sci-Fi. This resurrection of the series quickly made a fan and provided me—probably for the first time—with appointment television on Friday nights.

Over the past 13 episodes, Christopher Eccleston--and showrunner Russell T. Davies, who re-envisioned Doctor Who for the 21st century--has lead viewers on a rather surreal series of adventures: exposing a Slithereen conspiracy from within 10 Downing Street, investigating the haunting by an alien ghost child in World War II-era London, battling against the last surviving member of his alien nemeses the Daleks, teaming up with legendary author Charles Dickens in 19th century Cardiff, and managing to avert the end of the world on several occasions. Along the way, he’s been helped--and sometimes hindered--by Rose (Billie Piper) and their latest companion, the bi-sexual Captain Jack Harkness (John Barrowman), a futuristic con artist and renegade member of the Time Agents, who is actually getting his very own spin-off series, fittingly enough called Torchwood. (As Who loyalists will recall, Torchwood was the code-name for the Doctor Who relaunch, so it’s only appropriate that Captain Jack gets to steal the title for himself.)

Last week’s episode found the Doctor, Rose, and Captain Jack back on the remains of Satellite 5, a dangerous news satellite in the distant future, which had been destroyed once by the Doctor and which has now been redeveloped (by whom?) to broadcast sadistic and fatal versions of familiar television programs like Big Brother, The Weakest Link, and What Not to Wear. (It was great seeing Anne Droid, the robotic version of Weakest Link’s Anne Robinson but I especially loved What Not to Wear’s style robots Trin-ee and Zuzannah, voiced by the lovely Trinny Woodall and Susannah Constantine. In a word: classic.) The masterminds behind this bizarre turn of events are the Daleks. They’re back, they have a plan, and chances are it involves their desire to “exterminate” just about everything. Reality series as literal deathtraps? Only on Doctor Who. I have no fear that Rose and Jack (when was the last time you saw those two names together in a sentence since Titanic?) will make it out alive, but I’m a little concerned about the Doctor. Or at least the Doctor as played by Eccleston…

While saying adieu for now to the series makes me feel all melancholy, I’ll truly miss actor Christopher Eccleston, who makes his final appearance as the Doctor (the 9th Doctor, if you’re keeping track of such things) in tonight’s installment (“The Parting of the Ways”). I’ll miss Eccleston’s lopsided grin and manic delivery; he imbued the Time Lord with a real love of adventure in an age where our superheroes usually have their responsibilities thrust upon them (thank you, Uncle Ben). As I never really watched Doctor Who before this latest series, Eccleston will forever exist in my memory as the formative Doctor, though I do have a fondness for the Tom Baker incarnation… but it might just be because of the scarf.

I’m looking forward to seeing Viva Blackpool’s David Tennant and his own take on the Doctor (I’ve heard extremely good things from across the pond) but part of me wishes that Eccleston would have stayed on with the series for a very, very long time. I’ve heard various reasons as to why he departed, ranging from wishing to branch out and not get typecast because of the role to a disinclination on his part to become “famous.” Regardless, Eccleston is rumored to be linked to the upcoming remake of another British cult classic: The Prisoner.

In the meantime, I can only hope that Sci-Fi brings us the second season of Doctor Who which is already airing in the UK. And as for that Christmas special in which Tennant appears for the first time? Come on, Sci Fi, and do us Who fans a favor and air it now rather than waiting six months. After all, it’s not every day that we get Christmas in June.

See above. It’s the season finale of Doctor Who, so naturally I’ll be watching. On tonight's installment "The Parting of the Ways"), The Doctor is forced to battle a swarm of Daleks to rescue the kidnapped Rose while the fate of the human race is up for grabs. Meanwhile, Rose and the Doctor’s relationship is tested as one of them makes an enormous sacrifice. I’m getting sniffly just thinking about it.

The British political satire "so sharp you could cut yourself on it." (According to yours truly, anyway.) On tonight's episode, the Department of Social Affairs is placed under governmental scrutiny.

ticknart said…
When I was little, my mom taped old episodes of Dr. Who from PBS and watched them on Sunday mornings. I had no idea what was going on or who the people were, but I always enjoyed the idea. I especially liked the Tardis, a phone booth with an inside larger than the room we watched TV in that could travel through time. Even watcing this new series, the Tardis boggles and excites me.

I didn't know that Christopher Eccleston wasn't staring in the second season. That's disappointing. The eight before him lasted a combined 25 years (I think). It makes me sad to think that he didn't do a second, for tradition's sake and the fact that he's been a brilliant Dr. Who.

Like you, my first introduction to the Dr. Who series was through a parent. I used to watch Dr. Who with my dad and even though I usually was confused as to what was going on, there was something oddly comforting about the zany doctor and his Tardis.

So, it was with much nostalgia that I started watching the new Dr. Who series and was so happy to fall in love with the Doctor all over again. Christopher Eccleston was brilliant but I've also always loved David Tennant as an actor and believe he will bring good things to the role as well.

Looking forward to the episode tonight. Might even get a bit sniffly as it comes to an end. Maybe I'll just have to buy the series on DVD and watch with my dad for old times sake...
6/09/2006