Reality Check: Chef Ramsay Turns Up the Heat in This "Kitchen" 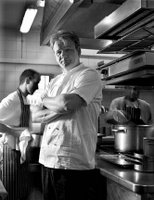 I've been suffering from some serious Top Chef withdrawal since the Bravo reality series ended a few weeks ago and like a much needed fix, along came FOX's Hell's Kitchen--just in time to fill my quota of culinary guilty pleasure television. While the two shows aren't exactly the same beast (no robotic host in sight here), they both pick aspiring chefs of varying experience and skill to fight it out for the chance to be the Chosen One, the one girl in all the world with the strength to fight the vampires--oops, wrong show. I'm happy to see that in addition to host/chef Gordon Ramsay, the whole gang is back: sous chefs Scott and Mary Ann and French maitre d' Jean Philippe. Let the games begin...

I'll say it right now: I like Gordon Ramsay, the former pro-footie (that's soccer to the Yanks in the audience) player turned celebrity chef who just so happens to own a whole fleet of five-star restaurants in London. He's abrasive, vulgar, and domineering, basically everything that you'd want in the head chef of a busy and chaotic restaurant, and he has an all-consuming sense of perfection and standards that would make an angel weep.

I am also sure that his performance in Hell's Kitchen is a lot of hot air. Yes, he's definitely demanding and precise but food is Ramsay's passion as well as his profession and his modus operandi has always been Tough Love. Impress him and he'll praise you; fail and he'll smite you with a vengeance that knows no bounds, whether it be to throw your improper dish on the floor or at you or to insult you or your hairstyle (Giacomo, I am talking about you). But watch Ramsay on his other series, Ramsay's Kitchen Nightmares (currently airing on BBC America), and you'll see that behind the bluster and the rage blackouts, he's man who CARES, whose approach to helping is sometimes to break people down to their weakest and then build them back up. And it's often an approach that works.

Gordon's got his work cut out for him with the candidates that FOX assembled for this, the second installment of Hell's Kitchen. Unlike the Top Chef crew, these twelve aspiring chefs don't seem all that worthy to call themselves chefs. The word chef literally means chief, a leader, and other than Heather (more on her later), I failed to see any leadership potential--and not a lot of culinary potential either--in any of these players. (I'm also rather confused as to why the show's producers selected six of the contestants from the state of Texas; it hardly adds to the show's claim that they scoured the country to find 12 contenders... and then decided to cast novice chef Penny?) Taking a page from The Apprentice's rulebook, Hell's Kitchen is this time split down gender lines. In the blue kitchen, it's the men's team and, in the red kitchen, it's the women (what, no pink?).

I was initially impressed with 21-year-old pizza maker Giacomo but he blew any respect I had for him by the second hour. Placed on the vegetable station (his job was to serve up the sides as the entrees become ready), he stood around, completely clueless and confused about what he was supposed to be preparing, and then deep-fried some cabbage into a gluey mess. The result? The blue team fails to actually get out a single entree and the "patrons" of the restaurant leave after a revolt. Badly done, Giacomo.

But there's only a single candidate that I'm impressed with and it's the gutsy and talented Heather, a 25-year-old sous chef from Port Jefferson, NY, who started cooking when her mother was diagnosed with cancer. She's cool under pressure, calm and collected. She even managed to impress and astonish Gordon Ramsay. After receiving a serious burn, she tried to remain in the game, delegating her station's responsibilities to sous chef Mary Ann and her teammates, leading Gordon to comment that he has never seen anything like that in his 21 years of culinary experience. My money's definitely on Heather to win this thing. After the red team spends an hour and a half of failing to get a single appetizer out in the first episode, Heather comes onto Penny's station and gets the first plates out in three minutes flat. And if she can stay calm and get her dishes out, she might just be a lock to win this thing. After all, she's already gotten Gordon on her side and that's more than half the battle.

The rest of the crew so far shows little promise. Former stockbroker Tom is so sweaty that his sweat is dripping off the end of his nose into the food (Ramsay luckily notices and orders the food thrown out); inane Sara cheers ("YAY!") after Heather manages to get the appetizers out, causing Ramsay to snap at her; Keith, a professional chef, is a clown who needs to be taken down a few pegs (it helped that Ramsay forced him to take off his ridiculous hat and then filled in with castoffs from Keith's signature dish); the now-booted Gabe, a 27-year-old marketing executive, couldn't pay attention to the orders and mostly stood around looking confused; salad chef Virginia couldn't figure out how to properly cook a Wellington and wandered into the other kitchen, begging for lamb stock. I can't say I was taken with any of them and I'd urge the show's producers to pick a few more "winners" rather than the reality TV-friendly crew they've assembled here.

Hell's Kitchen has never been subtle but the producers took the show's hellish motif a little far. Besides for the ubiquitous flames and pitchforks, contestants' photographs now burst into flames when they're eliminated (Ramsay violently shoving their chef's whites onto the hooks wasn't enough?). And the backyard hot tub? Let me guess, FOX's idea? I forgot for a minute if I was watching a cooking competition or The Real World as the girls changed into bikinis and started to party after winning a challenge. But the worst has got to be the awful, repetitive voiceover narration throughout the show; I think the producers believe that it adds to the drama and tension of the show, but instead it just irritates. If you're going to have to use narration, at least have Gordon record it; he does it for Ramsay's Kitchen Nightmares, so it's not too much of a stretch.

I'll be looking forward to subsequent episodes as I cheer Heather on. And until Bravo brings back Top Chef next season, this is an ideal stopgap in the meantime. Equal parts competition and backstabbing, Hell's Kitchen is the perfect antidote to a hot summer's night. Just as long as you can stand the heat in Ramsay's kitchen.

If you missed the fifth episode of this scathingly funny British political satire, here's your chance tonight to catch up before a new episode airs on Friday. On tonight's episode, the Department of Social Affairs is placed under governmental scrutiny by an upstart looking to steal Malcolm's power right out from underneath him. All I can say is, no one fracks with Malcolm and gets away with it...

Anonymous said…
I've never seen this show, cause honestly, I can't make it through the ads. I do love my reality tv, but humiliation tv is not my bag (same reason I don't like the early rounds of Idol). Imagine my surprise when I got home last night (around 10:30) and found Quentin on the couch watching it. He groaned and said, "Ugh, I have to watch cause Dave's sister is on it." Yup - turns out that one of our good friend's sister is a contestant. I think it's Sara - the girl w/the glasses. I only watched for about 10 minutes.
6/13/2006

Anonymous said…
I definitely prefer Top Chef to this show. The whole screaming thing wears thin pretty early and seems forced at times. And at least the Top Chef contestants had a clue as to what they were doing. These people (with a few exceptions) act like they wandered in off the street.
6/13/2006