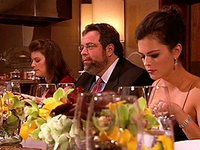 The android has left the building. Or the test kitchen, anyway.

Top Chef's robotic host Katie Lee Joel, the veritable "Uptown Girl" herself (pictured at left), will NOT be sticking around for a second course of Bravo's hit culinary competition. According to a well-placed insider, Joel will "not be returning" to the show. No reason for her departure was cited.

Top Chef's second season was announced by Bravo last month, but no return date has been set for the series' ten-episode sophomore season. Stay tuned as this story develops.

UPDATE (6/27): Bravo has now confirmed the above story.

Anonymous said…
Thank goodness! Katie Lee is a very pretty girl but she's about as exciting to watch as a piece of cardboard. And she always seemed peeved. There were times when I was afraid she might disintegrate a contestent by shooting laser beams out of her eyes. Glad I won't have to worry about that anymore.
6/20/2006

Anonymous said…
Yay!! Bravo must've listened to my comments!!! I know she's the wife of a music legend and all, but Katie Lee was abysmal. And I didn't understand why someone so young would wear SO much makeup and jewelry. It was obvious she spend her days on her wardrobe (what was up with the Kimonos?) instead of catching up on all the culinary knowledge she was so severely lacking.
6/21/2006

Anonymous said…
HOORAY!!! I think she always seemed upset, because she was hosting a show about food, being the anorexic, that she is. The only thing she knew about food, was how to avoid it. Let's get a host, who isn't afraid to EAT!!
6/21/2006

Anonymous said…
With the consensus that every person is from the same mold - as a television star, it is no wonder that these unkind remarks have been shouted by the vultures. However, we should remember that the reason that she is quiet or wears so much makeup/jewelry is because she is young and trying to fit in with a much older crowd than she is. It is difficult to be young and despised, I just hope that she doesn't let these remarks get her down. Her style is expressive of her personality. She is bold enough to wear what she likes - and wears everything I have seen her in very well. I see a lot of potential!
7/08/2006

Anonymous said…
Good for her! She is very pretty and fit. I thought she "settled" in Top Chef and am sure she has chosen better projects to invest her time in.
7/08/2006

TheSaraToothTiger said…
Gosh, you folks are awfully harsh. For my part, I actually enjoyed watching Katie.
She was stiff, but she wasn't as horrible as you're making her out to be.
There were moments when she had real chemistry with the cast.
And throwing around anorexia as an insult is cruel.
Maybe the old adage is true - most nasty comments are derived from jealousy.
Either that, or some of you have way too much time on your hands.
7/10/2006

Anonymous said…
Do you seriously think for a TV show she does her own makeup? Do you not think there is a director telling her how to act, what to say and wear? You people trashing her are idiots! She is not anorexic unless you ofcourse are a morbidly obese person looking at her. Wonder what she would say about the way any of you rude people dress and look? Take a look at yourself and your behavior before you trash someone else. I thought Katie did a great job but we didn't see enough of her to see her true personallity. If she left on her own, good for her. I wish her bigger and better things. If she didn't then shame on Bravo esp. if they listened to the negative comments on this message board. As for a trophy wife, I heard Billy in an interview say he would have married her even if she were 30 years OLDER than him! He feels that strongly about their life. Leave her alone! I would imagine none of you have been asked to host a show have you?
7/12/2006

Stephen said…
I'm glad Katie is no longer the host, but I'm also glad Tom Colicchio won't be the replacement. He's very fair and logical as a judge. yay for Top Chef haha.
7/13/2006

Anonymous said…
You're all idiots. Katie Lee was a terrible host but hardly anorexic. She is in great shape. Great-looking girl--terrible host. Some people, no matter how cute they are, just don't have "star quality." That's not a put-down, but anyone who said she was a good host was thinking with what's between their legs, not between their ears.
7/15/2006

Anonymous said…
from the comment from IZNUWSH, that was pretty pathetic the comment "thinking with what was between your legs". Discusting. Watch the first season of Project Runway and see how stiff Heidi Klum was. Even she recently said she finally feels comfortable as being host and can show more of her true self. She said when modeling she didn't talk so it was not natural to her. She is great now. Give Katie a break. For all you know,she left on her own. Her husband is touring in Europe, getting ready to tour Austalia, so perhaps she chose to be with him.
7/22/2006

Anonymous said…
It always seemed silly that she should be hosting the show. She's a pretty girl, but she's no chef and it just seemed ridiculous that she should be giving her silly critiques among professional chefs and food and wine experts. At least Heidi Klum knows something about fashion, Katie didn't know anything about food.
8/16/2006

Anonymous said…
Hooray! Katie Lee Joel is another example of a beauty with the personality of a mud fence. Her tag line should have been: "Please pack your knives and go while I go take another Valium..." Let's hope the new host can actually bring something intellectual and interesting to season 2.
8/16/2006

Anonymous said…
Apparently "Anonymous" did not see Katie's website, "Olive and Peach.com". She knows a great deal about food and has wonderful taste. Her grandmother is a wonderful cook, and, she and Katie spent a lot of time together cooking.
10/07/2006

Anonymous said…
Give Katie Lee a chance to show her personality! What cruel remarks!
10/07/2006

Your comment is being deleted because it is off-topic.

Anonymous said…
Here is my new project. "Just The Way You Are" is a Billy Joel song and "Summertime" from George Gershwin. I rearranged, sung and produced the songs here in Cleveland.
Dolinar Spahija

http://www.myspace.com/dolinarspahija
let me know what do you think please.
8/19/2008

Anonymous said…
I also am very pleased Katie left Top Chef. I think Katie's food awareness is similar to Padme's but Katie's personal issues come onto the screen way too much. Padme's relaxed manner is far more enjoyable and entertaining. As for anorexia, Katie hardly looks anorexic sheesh...have another look.
2/04/2009