FOX Backs Off "The OC" While Circling Dead Pilots 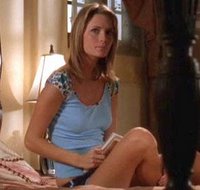 Variety is reporting that FOX has quietly cut its episodic commitment to struggling teen soap The OC from the standard 22 episodes per season to a shorter 16-episode run. According to Variety, a FOX network spokesperson "attributed the cutback to the net's scheduling needs. The OC won't have its season premiere until Nov. 2--about a month after most FOX shows--and therefore, the reasoning goes, net won't need as many episodes in the can."

One need not have the mathematic skills of dearly departed Marissa Cooper to figure out that if The OC begins on November 2nd and airs all 16 episodes, the series will end its run at the end of February. It would, however, leave plenty of room for FOX to launch a new series in The OC's timeslot, although tough competition from timeslot fellows CSI and Grey's Anatomy will make that a rather difficult feat.

In other news, FOX has also gave a potential spark of life back to several pilots believed to be dead. Following yesterday's announcement about options being renewed on cast members involved with FOX dramas Damages and Beyond, the network has also renewed options on the regulars on hostage negotiator drama Faceless. Additionally, several cast members on FOX comedies The 12th Man and The Adventures of Big Handsome Guy and His Little Friend also had their options renewed.

While, again, the above news doesn't signify a commitment on the part of the network to order these pilots to series, it does mean that FOX is at least considering it. Variety reported that FOX's options on these actors run through the end of December, giving FOX a few months to weigh the decision.

The OC
Labels: The OC

Anonymous said…
That whole "We cut the order to make room for new shows" sounds like a lot of bull to me, but whatever - the OC sucks.
6/28/2006

savemarissa said…
Marissa Coooper WILL be saved. The O.C. WILL survive. "United and stronger than ever, Marissa's fans will fight together" Join the fight at