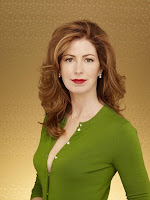 Dana Delany admitted that none of Wisteria Lane's residents feel exactly safe these days, following the announcement that Nicollette Sheridan will leave Desperate Housewives. "Everyone is vulnerable on Wisteria Lane -- any of us could go," said Delany. "Every single person in that cast feels like their days are numbered. I think [Marc Cherry] likes to keep people on their toes." An upcoming storyline will find Delany's Katherine in potential jeopardy. "It's good," said Delany of the upcoming plot, "because that sense of not knowing keeps the actors on their toes and it keeps the audience anticipating." (Entertainment Weekly's Ausiello Files)

Pilot helmer alert: The CW has given an official pilot order to Melrose Place, an update of the soap to be overseen by Darren Swimmer and Todd Slavkin (Smallville). Pilot, from CBS Paramount Network Television, will be directed by Davis Guggenheim (An Inconvenient Truth, 24) and will focus on the residents of a trendy Los Angeles neighborhood. Elsewhere, Jeffrey Nachmanoff (Traitor) will direct FOX drama pilot Masterwork, from writer/executive producer Paul Scheuring (Prison Break).

And on the casting front, Zosia Mamet (The Unit) and Toni Trucks (Barbershop) have been cast in FOX comedy pilot Ab Fab as Eddie's daughter Saffron and her assistant; Diego Klattenhoff (Men in Trees) will co-star in NBC drama pilot Mercy; and Jason George (Eli Stone) and Sarah Drew (Everwood) have been cast in ABC drama pilot Inside the Box. (Hollywood Reporter)

Meanwhile, the recession has wrought some very noticeable changes this pilot season as the networks are funding more in-house production and are shooting more pilot presentations than full-out pilots. The networks, as seen by recent developments, also seem willing to cut and run from a project if the right combination of casting, director, and showrunner don't materialize. (Variety)

Tamara Feldman (Dirty Sexy Money) will appear in a four-episode story arc later this season on CW's Gossip Girl, where she will reprise her role as Manhattan socialite Poppy Lifton. (Variety)

Patrick Dempsey won't be leaving Grey's Anatomy, but Michael Ausiello has a scoop on McDreamy's status at Seattle Grace in an upcoming story arc on the ABC drama. (Entertainment Weekly's Ausiello Files)

Starz has renewed drama series Crash for a second season of thirteen episodes but the Lionsgate-produced drama will bring in a new creative team for the series, to be overseen by Ira Steven Behr (The 4400), who will serve as executive producer. He'll be joined on the series by James DeMonaco and Todd Harthan (The Kill Point) while creator/executive producer Glen Mazzara will serve as a consulting producer. "About half of the story lines in the first season will continue into Season 2," writes the Hollywood Reporter's Nellie Andreeva. "Roughly half of the cast, including star Dennis Hopper, will stay on." (Hollywood Reporter)

CW's America's Next Top Model is set to start casting its thirteenth cycle later this week with one noticeable change: for the first time in the series' history, applicants need to be 5'7" and under. "There have been top supermodels in the past that weren't as tall as the industry demands, like fashion icon Kate Moss," said series co-creator/host Tyra Banks. "So we are changing up Top Model for cycle 13 and making it a year for the shorter model!" Gee, something tells me these girls will be highly prized in the cutthroat modeling world and not just one of Tyra's latest "causes." (via press release)

Katelynn Pippy has been bumped to series regular on Lifetime's drama series Army Wives; she plays the daughter of Kim Delaney's Claudia. (Variety)

Fox Reality Channel has renewed docudrama The Academy for a third season, which will focus on firefighter recruits. The Academy: Orange County Fire is executive produced by Scott Sternberg. (Hollywood Reporter)

Jennifer Aspen (Family Man) has been cast in FOX musical comedy series Glee, where she will play the role of Kendra. (Variety)

Following several weeks of speculation, Peter Chernin will leave News Corp after twenty years and will be "taking up the opportunity to start a new motion picture and television production venture with Fox," according to a memo issued by Rupert Murdoch which confirms that Chernin will not be renewing his contract. So what can Chernin's departure mean for the company? "There will be a streamlined management structure between our Los Angeles-based business units and the rest of the company," writes Murdoch. "Peter and I will be communicating more on this over the next few months. For the time being, of course, the talented executive team at the Fox Group will continue to report to Peter." (Los Angeles Times)

SAG and AMPTP may need some intervention from a mediator in order to end the latest standoff between the guild and the studios. It's hoped the CAA head Richard Lovett will step in and mediate, as he did during the dispute between WGA and the majors last year. (Hollywood Reporter)

Anonymous said…
Not happy about the Melrose Place resurrection. It just seems totally unnecessary - especially as the 901210 remake is not very good. And I'm dreading the Ab Fab remake even more. Please come up with some original ideas, people!
2/24/2009