Beyond Imagination: Sci Fi to Morph Into Syfy (Part Two) 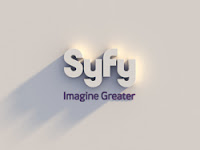 Some more details emerging from the announcement earlier today that Sci Fi Channel will rebrand itself as Syfy (with a new logo and tagline), beginning in July.

Many have noted the similarity between Sci Fi's new moniker, Syfy, and that of ten-year old science fiction news website SyFy Portal, which was recently rechristened Airlock Alpha.

I was contacted by SyFy Portal founder Michael Hinman to set the record straight about the origins of the network's new Syfy branding, which Sci Fi claims was the result of a thorough study by their own marketing team.

"We sold our domain name to a New York broker that we suspected was representing NBCU mostly because they were using NBCU's attorney in New York," SyFy Portal (now Airlock Alpha) founder Hinman, a staff writer for the Tampa Bay Business Journal, told me via email. "We sold the brand just a few weeks before NBCU announced this new name."

"While we have no ownership or claim to the 'Syfy' name anymore, it still has a special place in my heart," continued Hinman. "I want to see it succeed, even if that success comes in the form only of a smile on my face, so I am firmly in support of Sci Fi Channel's new name."

Of his site's own name change, Hinman said, "The rebranding for us has been a blessing in disguise. I haven't been this excited over a site and name in a long time, and Airlock Alpha fits perfectly for what we do. Our team, including the great work of Nicholas Chase and Shane Churchman, made this an extraordinary venture -- one that should've taken 18 months, but instead was done in less than three weeks."

Anonymous said…
Airlock Alpha is a much cooler name than Sci Fi OR SyFy. They should have had Michael Hinman come up with the channel's new moniker.
3/16/2009