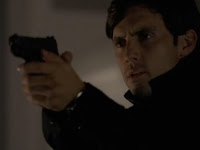 NBC will likely be renewing superhero drama Heroes for a fourth season. At least, according to NBC Entertainment President Angela Bromstad, who said that the series wasn't currently on the bubble for the next season and that the network was likely going to order 18-20 episodes for next season. One of the major factors is said to be NBC's sci-fi pilot Day One, from Heroes writer Jesse Alexander, which could air on Monday evenings. "Day One is a big event and we're looking at that to come into the Heroes spot," said Bromstad. "It's right now being looked at as a 13-episode run -- something people could commit to and we could make a big splash with." And the network is also said to have been privately discussing issuing an end date for Heroes, however " even if NBC ever made such a move, Bromstad said, they wouldn't want to make next season the conclusion." (Hollywood Reporter's The Live Feed)

Speaking of Glee, FOX has announced that it will air the pilot episode of Glee on Tuesday, May 19th, following an episode of American Idol. However, the drama series itself won't be launching until this fall. "An ambitious and unique show such as Glee deserves an ambitious and unique kick-off," said Peter Liguori, Chairman, Fox Broadcasting Company. "We also wanted to take advantage of the huge American Idol promotional platform to launch the marketing campaign in May." (via press release)

Indira Varma (Rome, Torchwood) has nabbed the lead role in ABC drama pilot Inside the Box, from executive producer Shonda Rhimes (Grey's Anatomy); she'll play Catherine, an uber-ambitious and tightly wound news producer who oversees the Washington D.C. network news bureau who believes she is finally getting a promotion but is mistaken. Pilot will be directed by Mark Tinker. Elsewhere, Gina Torres (Firefly) has joined the cast of CBS drama pilot Washington Field, where she will play a "rapid-deployment team coordinator and tactical pilot." And David Giuntoli (Privileged) will star as a wealthy young attorney on CBS' untitled US Attorney drama pilot from writer/EXP Frank Military. (Hollywood Reporter)

E! Online's Kristin Dos Santos is reporting that the final two episodes of FOX's Prison Break, which have yet to be shot will wrap up the series in a two-hour telepic that features "a self-contained Prison Break adventure in which Michael faces the most challenging break ever," rather than the basis for a spin-off to star Jodi Lyn O'Keefe's Gretchen. "Despite what many of you fans have emailed, Fox is not cooking up a show around Gretchen, nor is it working on a ladies-behind-bars spinoff," writes Dos Santos. "The Prison Break creative team is finally making that much-discussed two-hour wrap-up film." (E! Online's Watch with Kristin)

FOX has announced that it will air Osbournes: Reloaded as a series of variety specials rather than an ongoing series. The first special is now set to air on Tuesday, March 31st at 9 pm, after an episode of American Idol, and will return at a later date with specials to air throughout the season. And Fringe fans, take note: Osbournes: Reloaded will pre-empt the series for a week; Fringe is now set to return on April 7th. (Variety)

ABC has given a pilot presentation to multi-camera comedy This Little Piggy, about two adult siblings who are forced to move back in with their older brother and his family in their childhood home when faced with the tough economic crisis. Project, from ABC Studios, is written/executive produced by Steven Cragg and Brian Bradley. (Hollywood Reporter)

MTV is said to be considering continuing "reality" series The Hills even if Lauren Conrad leaves at the end of next season, set to launch March 30th. Series would instead continue to follow the existing cast--without Conrad--of other well-heeled Angelenos, including Heidi, Spencer, Audrina, and Brody. (Los Angeles Times)

Sundance Channel has renewed musical series Live From Abbey Road for a third season. (Series airs in the UK on Channel 4.) The third season, consisting of 12 episodes, will feature such arists as James Taylor, Seal, Fleet Foxes, Keane, the Killers, and Sugarland. (Hollywood Reporter)

Sony Pictures Television has promoted Karen Glass to VP of development, where she will handle development and production for alternative series in New York. She reports to Holly Jacobs. (Variety)

RDF USA has hired British reality producer Claire O'Donohoe as an EVP, where she will oversee the nonscripted development team, developing projects for broadcast and cable. She will report to Chris Coelen. (Hollywood Reporter)

Anonymous said…
I had no idea that Victor Garber could sing! I've heard good things about Glee so far and the addition of Garber and Chenoweth to the cast is a good sign.
3/05/2009