David Chase to Return to HBO with New Mini-Series, "A Ribbon of Dreams" 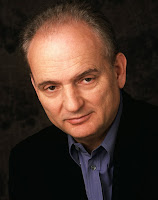 "A film is a ribbon of dreams." - Orson Welles

Since the conclusion of The Sopranos, many have wondered just when creator David Chase would return to his pay cable home at HBO. That time, ladies and gentlemen, is now.

HBO today announced that it has pacted with David Chase to develop mini-series A Ribbon of Dreams about the creation of motion pictures and the development of the Hollywood film industry.

According to HBO, the mini-series' plot will "begin in 1913 and follow two men, one a college-educated mechanical engineer, the other a cowboy with a violent past, who form an unlikely producing partnership and together become pioneers and then powers for a time in motion pictures." Specifically, the two men will "begin as employees of D.W. Griffith, and then cross career paths with John Ford, John Wayne, Raoul Walsh, Bette Davis, Billy Wilder and others who gave shape to Hollywood as it grew from the age of rough-hewn silent Westerns, to the golden era of talkies and the studio system, to the auteur movement, to television, and finally to the present day," according to the press release.

Chase will write and executive produce the mini-series with Brad Grey. Chase will also direct the initial installments of A Ribbon of Dreams, which will be an HBO/Paramount Pictures/Chase Films production.

“It gives me pleasure to think of working, together with Brad, with HBO, again," said David Chase in a statement. "These are all people who, obviously, occupy a special place in my heart.”

“For seven years, David Chase dazzled and entertained the world with The Sopranos. He’s a remarkable talent,” said HBO co-president Richard Plepler, “and we’re very excited to be working with both David and Brad again.”

“The return of David Chase to HBO is great news for our viewers,” observed Richard Lombardo, president, HBO Programming Group. “The epic scope of this miniseries will provide the perfect setting for his remarkable creative gifts.”

“David is a master storyteller who has once again chosen a fascinating subject,” said Grey. “I am excited for this project as an executive producer, a friend and a huge fan of David’s, and am grateful to HBO’s incredibly talented leadership of Richard and Michael for partnering with us.”

Anonymous said…
This could be really interesting... especially on HBO. Not crazy about the title. I appreciate the Orson Welles quote but "A Ribbon of Dreams" just sounds so, well, pretentious. Still, the project could be a good one.
3/16/2009