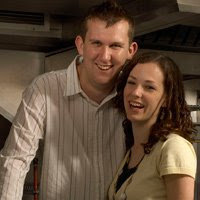 It was definitely sink or swim time on Last Restaurant Standing this week.

On this week's episode ("Airline Food") on the deliciously addictive culinary competition series, Raymond Blanc offered his toughest Challenge yet to three teams: they would have to design a three-course meal for first class airline passengers that would define their brand and style of cooking and present said menu to airline reps and Raymond and his inspectors while simulating a first class cabin meal service.

No easy task that. Especially as two of the three teams in this week's Challenge have some pretty subpar cooking skills... and the chefs themselves wouldn't be on hand to reheat and plate each dish, but would have to rely on their front-of-house counterparts to effortlessly carry off service. In other words: ouch.

Tim and Lindsie. I knew from the start that these two would be safe from elimination if Lindsie could keep her emotions in check and focus on the task at hand, rather than think about how much she misses her one-year-old son. And when the duo landed Helen and Stephen as their helpers on this Challenge, I knew they pretty much had it in the bag. For one, Stephen is the ideal front-of-house manager, polished and poised, and he was able to lend his considerable skills to aid Lindsie during service; second, Helen works extremely well in a team setting and it was an absolute hoot to see her and Tim working together shopping and cooking.

While Tim was criticized by Raymond for spending so much time shopping (when he should have been back in the kitchen prepping for the following day), he was correct in taking the appropriate time to correctly source seasonal and local fare, being sure to discover the provenance of every ingredient that was going on the plate. After all, he had gotten attacked in the past by Raymond, Sarah, and David for calling his restaurant concept True Provenance and then failing to follow through on that promise. Still, the Jeremy Barber breed/farmer gaffe was their only (minor) misstep in an otherwise polished and elegant performance this week. Their pork rillettes and saddle of lamb looked absolutely appropriate for first class passengers, was fresh and seasonal, completely on target with their brand and customer, and tasted divine. Lindsie and Stephen prepped the cabin for service together and were the only team that managed to do so and get the food out on time to boot. Well done all around, guys.

Laura and Peter. I'm still not sure what to make of the Welsh Wok. This week, they did manage to somewhat boil down their confusing restaurant concept into a precise message (Asian dishes in a relaxed, casual environment) but failed to deliver once again on the food. Peter and teammate Russell went to great lengths to source high-end traditional ingredients from a far-off Chinese market but then cut corners by buying frozen king prawns rather than fresh. Yes, they would have to shell them but first class passengers should expect fresh shrimp (and rightfully so) rather than frozen ones. Additionally, there were issues once again with Peter's rice this week, which was completely overcooked and sticky (and couldn't be extracted from their reheating tins), and his starter dish of noodles were soggy and swollen. I knew right away that both Raymond and Sarah would know that the prawns were frozen and, sure enough, they did within one bite. (Loved that Sarah looked over at Raymond to see his reaction.)

Laura meanwhile promised the execs a "speedy service" but the problems with the rice and the slowness with setting up the cabin meant that the food was alarmingly delayed until the last second. And her severe unfriendliness, coupled with her nerves, didn't do much to allay the judges' concerns about her front-of-house charms or her understanding of this challenge. Did the rice cause a problem? Definitely. But Laura could have smiled and tried to make the passengers comfortable at least... rather than once again defend husband Pete's rice-making abilities.

Chris and Caroline. And then there was Chris and Caroline, who found themselves in Raymond's Challenge for the second time. I've never been convinced that Chris really can cook or understand how to run a higher-end dining establishment and he proved that completely this week, purchasing all of the ingredients for the first class passengers' dishes at Asda, cutting corners and costs the whole way, and then presenting a dish that was really only appropriate for casual pub food and certainly not for fine dining.

As soon as he said he was going to do a Lancashire hot pot, I was concerned that he had missed the point of the Challenge all together. If he had somehow managed to pull off the dish in an elevated, more elegant fashion, it could have worked. But instead, he offered something that looked like a dog's dinner (which David Moore criticized was more like beef bourguignon than a true, traditional Lancashire hot pot), topped with some awful looking potato rosti: charred on the outside and raw on the inside. I saw that the rosti were burned as soon as he pulled them out of the oven at the prep kitchen; trying to convince the judges that they got burned during reheating on the plane was utterly ludicrous.

The pastry and creme anglais with berries dessert, made by James surprisingly, was inedible. Did James somehow knowingly sabotage Caroline and Chris' chances? I don't know but I wouldn't put it past him. He is a far superior chef to Chris in every regard so I don't quite know how some of those dishes went out the way they did without him stepping in. But at the end of the day it was Chris who was in charge of the kitchen and his decisions, concepts, and tastes defined what the team was preparing. Any responsibility for the final product does rest squarely on his shoulders.

So it was hardly surprising that Chris and Caroline's restaurant would be closed. They've managed to squeak by too many times already and I haven't seen any real promise of improvement from Chris' cuisine, which had been criticized as bland, underseasoned, and tasteless. I didn't see any possible way for Raymond to open a restaurant with them under any circumstances.

What did you think of this week's episode? Would you have sent home Chris and Caroline or the wobbly Peter and Laura instead? Discuss.

Next week on Last Restaurant Standing, the five remaining couples are challenged by Raymond Blanc to create the perfect take-out menu, while still running their restaurants at full efficiency.

Anonymous said…
When they poured the Lancashire hot pot onto the plate to serve it I got nauseous. It looked less like a dog's dinner and more like what comes out of a dog after it's had it's dinner. Luckily, the burnt potatoes covered it up a little but I was surprised to hear the judges say that it tasted good.

Chris and Caroline seem like nice, decent people but I agree with Raymond that they are not ready to run a restaurant by any means.
3/11/2009

Anonymous said…
I don't think that James was trying to sabotage Chris and Caroline but I don't think he was totally honest with Chris either. A few times when Chris started going on about how great something tasted or how good they were doing James just kind of smiled and nodded. I think he realized that Chris didn't have a lot of skill in the kitchen and wasn't going to jump in to save him, which is fair since it's a competition!
3/11/2009

Anonymous said…
Totally agree that Chris and Caroline should have gone home. HE CAN'T COOK! They keep skirting this issue but the guy can barely keep up with pub food let alone run a restaurant with Raymond.
3/11/2009