Channel Surfing: Alexis Bledel Scrubs in for "ER," Cassidy and McQueen Book Roles at CW, TARDIS to Get Makeover, "Day One" Nabs Four, and More 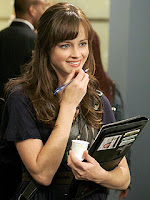 Former Gilmore Girls star Alexis Bledel will guest star in NBC's two-hour series finale of ER, where she will play a new intern named Julie Wise in the finale, which focuses on a 24 hour-long shift at County General Hospital. Casting marks Bledel's first major television appearance since the end of Gilmore Girls on the CW. Elsewhere, former Grey's Anatomy cast member Melissa George has been cast as the female lead in CBS' untitled US Attorney drama pilot from writer/executive producer Frank Military; George will play Susan, an ADA and ex-wife of the section chief (Michael Lange). (Entertainment Weekly's Ausiello Files)

Katie Cassidy (Supernatural) has been cast in CW's drama pilot Melrose Place, an update of the 1990s soap where she will play Ella Flynn, "an up-and-coming publicist with a big career ahead of her." Steven R. McQueen (Everwood), meanwhile, has been cast as one of the leads in Kevin Williamson's supernatural drama pilot Vampire Diaries, based on the Alloy series of novels. McQueen will play Jeremy, the younger brother of Elena, a teenage girl who finds herself caught between two vampiric brothers. (Variety, Hollywood Reporter)

Kim Raver (Lipstick Jungle) has been cast in drama pilot Inside the Box, where she will play an ambitious reporter who was once heralded as the next Diane Sawyer. More pilot casting announcements: Alyssa Milano (Single with Parents) will star in ABC's untitled Ricky Blitt comedy pilot; Ty Burrell (Back to You) will head to suburbia for ABC comedy pilot My American Family, John Patrick Amedori (Gossip Girl), Robert Wisdom (The Wire), and Jay Paulson (October Road) will star in ABC supernatural drama pilot Happy Town; Sharon Leal (Private Practice) and Brooklyn Sudano (My Wife and Kids) have been cast in ABC drama pilot Limelight; and Leah Pipes (Life is Wild) has joined the cast of the untitled Dave Hemingson legal drama pilot at ABC. Whew. (Hollywood Reporter)

David Lyons (ER), Carly Pope (24), Adam Campbell (Harper's Island), and Thekla Reuten (Sleeper Cell) have been cast in NBC sci-fi drama pilot Day One, from writer/executive producer Jesse Alexander (Heroes). [Editor's note: very curious to see just what Reuten does with the crucial role of Lynne, whom I am already in love with after reading the pilot script.] (Hollywood Reporter)

Anjelica Huston will reprise her role as Cynthia Keener later this season on Medium; she'll also be joined by guest star Jeffrey Tambor (Arrested Development) who will appear in an episode slated to air in May. Other casting tidbits: Ed Asner will guest star in CSI: Miami in April and Christa Miller (Scrubs) has joined the cast of ABC comedy pilot Cougar Town, opposite Courteney Cox. (Entertainment Weekly's Ausiello Files)

The New York Times investigates the intriguing character actors on the latest season of FX's Damages, including Darrell Hammond, Philip Bosco, Mario Van Peebles, Tom Aldredge, and Tom Noonan, who plays dogged Detective Huntley. “I don’t think about character or story very much,” said Noonan. “I walk away if those discussions come up on the set. Not rudely, not if someone’s talking directly to me. But back story, motivation — those words don’t mean much to me." (New York Times)

Tonight's episode of CSI: Miami will feature an embrace between Calleigh Duquesne (Emily Procter) and Eric Delko (Adam Rodriguez), after seven seasons of tension, which results in the duo embarking on a secret relationship that threatens to complicate their lives--both personal and professional--as well as that of their boss, Horatio Caine (David Caruso). "It's a huge addition to the show," said Rodriguez. "The audience waited a long time to see this, and for them to finally get the payoff, I hope they're enjoying it as much as we are." (USA Today)

The Sarah Silverman Program executive producers Sarah Silverman, Dan Sterling, and Rob Schrab have threatened to quit after they learned that Comedy Central wanted them to cut their budget by more then 20 percent, despite the fact that the series still has yet to receive an official third season pickup. (Hollywood Reporter)

Doctor Who's TARDIS is set to get a makeover when Matt Smith assumes the mantle of the Doctor beginning in 2010. Look for both the interior and exterior of the time-traveling space craft to get a vastly different look for Season Five, as the series moves into high-definition for the first time. (Digital Spy)

CBS has shot a pilot for reality competition series America's Strongest American, in which everyday Americans will complete in strength challenges. The project, hosted by Ben Bailey and Michelle Merkin, is executive produced by Embassy Row's Michael Davies and Barry Frank. (Hollywood Reporter)

No Doubt will appear in the May 11th episode of Gossip Girl, where they will perform Adam and the Ants song "Stand and Deliver." That episode is slated to be the backdoor pilot for the unnamed Gossip Girl spin-off starring Brittany Snow and Krysten Ritter, set in 1980s San Fernando Valley. (Hollywood Reporter)

Anonymous said…
So I guess Lipstick Jungle is canceled then??? Good riddance to bad rubbish!
3/02/2009

Anonymous said…
"America's Strongest American"? Pretty lame title. I'm sure the show will live up to the creativeness of it!
3/03/2009