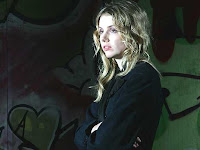 Welcome to your Tuesday morning television briefing. I don't know about you but this time change is killing me. Still, last night's episode of Chuck went a long way to making me feel better about the week.

While we now know who will be playing the Eleventh Doctor, there's been much speculation about who will play the companion to the next Doctor, to be played by Matt Smith in the fifth season of Doctor Who. The latest rumor? That former Skins star Hannah Murray--who played the delightfully out-there Cassie--is in "secret chats" with the BBC about joining Smith in Doctor Who's fifth season, set to air in 2010. "Hannah did some challenging stuff in Skins and they see her as an up-and-comer," said an unnamed BBC insider. Of course, this rumor is being floated by the News of the World, so take it with a (very large) grain of salt. (Digital Spy, News of the World)

Elsewhere, Rebecca Romijn (Ugly Betty) has will play the lead in ABC drama pilot Eastwick, a remake of the 1987 feature film The Witches of Eastwick. Romijn will play Roxie, in the pilot, from Warner Bros. Television, writer/executive producer Maggie Friedman, and director David Nutter. [Editor: In the pilot script, Roxanne "Roxie" Torcoletti is described as a sexy, bohemian artist with a penchant for making fertility goddess statues.] (Variety)

More pilot casting goodness: Jeremy Northam (The Tudors) will star in CBS drama pilot Miami Trauma; Matt Czuchry (Gilmore Girls) will star opposite Julianna Margulies in CBS drama pilot The Good Wife, where he'll play a first-year associate at the law firm where politician's wife Margulies gets a job; Missy Pyle (The Sarah Silverman Program), Deanna Dunagan (Prison Break), and Chris Parnell (30 Rock) have joined the cast of CBS comedy pilot Big D; and Saffron Burrows (My Own Worst Enemy), Jesse Bradford (The West Wing), and Gaby Hoffmann (200 Cigarettes) will fill out the cast of CBS drama The Eastmans, about a family of doctors. (Hollywood Reporter)

NBC is said to be involved in "active talks with DirecTV to extend their unique shared-window experiment with Friday Night Lights," according to Entertainment Weekly's Michael Ausiello who credits an unnamed "insider close to the negotiations" alleging that DirecTV and NBC may only agree to jointly renew the series if they can negotiate a two-season pickup. (Entertainment Weekly's Ausiello Files)

Matt Barr (One Tree Hill) has been cast in the CW's untitled Gossip Girl spinoff, where he will play Keith van der Woodsen, a wealthy Malibu scion and love interest for Lily (Brittany Snow). Given his surname, it's thought extremely likely that Keith is Lily's future husband and the father of Serena. (Hollywood Reporter)

Kevin Sussman (Ugly Betty) will guest star in an upcoming episode of CBS' The Big Bang Theory, where he will play a comic book nerd friend of the gang who begins dating Penny. Sussman's episode is currently slated to air April 13th. (Entertainment Weekly's Ausiello Files)

Michael J. Fox will return to primetime with a one-hour special entitled Michael J. Fox: Adventures of an Incurable Optimist on ABC. Special, set to air Thursday, May 7th, will follow Parkinson's Disease-afflicted Fox as he attempts to spread his positive outlook to others during some the current economic climate and interviews a mix of everyday people and celebrities about how they stay optimistic. Elsewhere, CBS has ordered a hidden camera special entitled I Get That a Lot, in which celebs--including Heidi Klum, Jeff Probst, Jessica Simpson, and Ice-T--will work ordinary jobs and tell the people around them that they are look-alikes and not the real deal. Special, which will air April 1st, is from LMNO Entertainment. (Variety)

Former Aliens in America star Adhir Kalyan--who will next appear in a five-episode story arc on CBS' Rules of Engagement--wants to land a role on CW's Gossip Girl. "I think that's the long-term goal for me in my career: at some point to get onto Gossip Girl and share screen time with either Blake Lively or Leighton Meester, whomever they see fit," said Kalyan. (E! Online's Watch with Kristin)

Danielle C.F. Maris said…
I'm trying not to set my expectations too high in regards to Treme (because how can you top The Wire?) but the addition of Melissa Leo to the cast has me really excited. She was phenomenal in Frozen River and I look forward to seeing more of what she can do.
3/10/2009

Anonymous said…
I love Hannah Murray, truly, but I just can't quite wrap my head around her being the Doctor's companion. She'd probably be brilliant but I really had my heart set on Michelle Ryan. Of course, I've had my concerns before about Doctor Who casting and have always been proven wrong (who knew that Catherine Tate would be so brilliant?) so I will withhold my reservations for now!
3/10/2009

Anonymous said…
I'm excited about Jeremy Northam doing 'Miami Trauma'. He was excellent in The Tudors; it'll be good to see him on screen on a weekly basis. Can't wait.

I agree about Michelle Ryan...i don't think she's the best actress in the world. But i would love to see her as Doctor Who's companian. I've been a fan since Jekyll.
3/10/2009