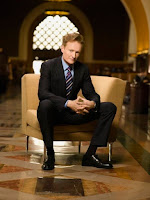 Yet another twist in the NBC latenight drama: Conan O'Brien has rejected NBC's proposal that he shift The Tonight Show to 12:05 am in order to accommodate a half-hour Jay Leno format at 11:35 pm. The move, announced via a slightly tongue-in-cheek statement, did not indicate that he had quit and The New York Times' Bill Carter cited an unnamed source that the network that indicated that O'Brien would depart after a financial settlement had been reached. "After only seven months,” said O’Brien in a statement, “with my Tonight Show in its infancy, NBC has decided to react to their terrible difficulties in prime time by making a change in their long-established late-night schedule." (New York Times)

Gugu Mbatha-Raw (Doctor Who, Bonekickers) has been cast as the female lead in J.J. Abrams' NBC espionage drama pilot Undercovers, opposite Boris Kodjoe and Gerald McRaney. Mbatha-Raw, who played Tish Jones in Season Three of Doctor Who, will play Samantha Bloom, a woman married to Kodjoe's Steven who shares a career with her husband: they're both spies who are "reactivated by the CIA." (Entertainment Weekly's Ausiello Files, Hollywood Reporter)

In an unsurprising twist, FOX has announced that it has renewed musical comedy Glee for a second season, set to launch this fall. "The early pickup will allow the show's producers to start planning Season Two now," wrote Variety's Michael Schneider, "and will also allow Fox to conduct a nationwide casting search to fill three new roles on the show." That search will be part of an interactive episodic special which will air late in the summer and will allow audiences to participate in the casting process. (Variety)

Pilot order alert! ABC has ordered a pilot for single-camera comedy Mr. Sunshine, starring Matthew Perry as a sports arena manager who finds himself in a mid-life crisis when he turns 40. Project, from Sony Pictures Television, Fan Fare, and Shoe Money, will be directed by Thomas Schlamme and is written by Perry, Alex Barnow, and Marc Firek, who will executive produce. (Variety)

HBO's Big Love launched its fourth season and improved on the season premiere of Season Three by 49%, luring in more than 1.7 million viewers versus the 1.1 million who tuned in to the start of Season Three. (Variety)

Entertainment Weekly's Michael Ausiello is reporting that Desperate Housewives' Dana Delany will join the cast of ABC's Castle for a two-episode story arc, where she will play Federal Agent Jordan Shaw. Her first appearance is slated to air Sunday, March 21st in a special airing while her second episode will air the following night in Castle's regular timeslot. (Entertainment Weekly's Ausiello Files)

ABC Family has renewed The Secret Life of the American Teenager and Make It or Break It, both of which will launch new seasons this summer. (Variety)

Additionally, the cabler's comedy 10 Things I Hate About You is set to return to the lineup with ten new episodes on Monday, March 29th at 8 pm ET/PT. (via press release)

MTV has ordered twelve episodes of docudrama The World of Jenks, set to launch this summer. Series, executive produced by Andrew Jenks, Mike Powers, Brent Haynes, and Brooke Posch, "follows documentary filmmaker Andrew Jenks as he lives the life of a different real-life person each week, from a rapper to a homeless teenager." The cabler also announced late summer launch dates for The Hard Times of RJ Berger and Warren the Ape. (Variety)