When I Am Through With You: "Damages" Theme Song Heads to iTunes 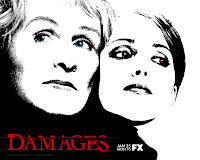 Nearly three years later, one of the most enduring and popular posts here at Televisionary is an August 2007 post about the theme song for Damages, the VLA's "When I Am Through With You."

In an age where many series--both comedies and dramas--have either eliminated opening title sequences or reduced them to a few quick chords, Damages' breathless credits not only capture the brutal wit of the series but also create a vivid atmosphere of ruthlessness and vengeance.

Besides for some stunning visuals, this is achieved masterfully through the use of the VLA's song ("When I Am Through With You"), which continues to win fans over. (Fans who then come here to determine just who sings this incredibly evocative song.)

Good news then for fans of the VLA and Damages. An email from the band's Jason Rabe has alerted me to the fact that the theme song is now available for purchase on iTunes and can be found here.

If you're lucky, Patty Hewes will send you a $3000 Chanel bag as a thank you.

abbytaz said…
Yeah, I purchased the song a few weeks back and was disappointed. Unfortunately it doesn't sound like the theme song on TV.
1/27/2010