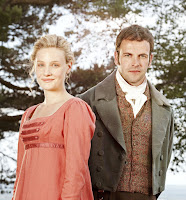 "Better to be without sense than misapply it as you do." - Mr. Knightley

Jane Austen's novel "Emma" remains an enduring masterpiece of biting wit, scathing satire, and Regency society-trapped-in-amber since its publication in 1815. Even nearly 200 years later, there's still quite a bit of relevance and humor to be found in its pages and the novel's matchmaking heroine Emma Woodhouse--young, spoiled, and naive--remains a favorite for readers of all ages.

While it's difficult to place those utterly fantastic adaptations out of your head when considering "Emma," there's something to be said also for authenticity and straightforwardness. Which brings us to the most recent "Emma" adaptation, Masterpiece Classic's Emma adaptation (it aired on BBC One last year), written by Sandy Welch and directed by Jim O'Hanlon. It might not feature cell phones, smash cuts, or breakneck pacing, but this Emma is a pleasurable if slightly imperfect adaptation.

Airing as four installments in the UK, Emma will air over two weeks here in the States and the format allows screenwriter Welch to give the deftly comic plot time to breathe without rushing through the action. There's a somewhat painful/nostalgic opening that my wife and I dubbed "Emma Babies," which features our main characters in childhood scenes of heartbreak and loss, displaying a seriousness that's at odds with the comedy to come. While I didn't mind the sequence, I did find the use of narration slightly intrusive at times.

In this version, Romola Garai (Atonement) is Emma Woodhouse, the sweetly naive and well-off young woman whose penchant for matchmaking has thrown the little social circle of Highbury into chaos. While Garai captures the quick wit of Emma, her performance at times errs a little too much on the bratty side. There's definitely fire behind her banter with neighbor (and brother-in-law) Mr. Knightley (Eli Stone's Johnny Lee Miller) but I wanted her to be a bit more brazen and mentally acute. Garai is perfectly fine but I couldn't help shake the feeling that she lacks a certain je ne sais quoi that makes Austen's Emma such a pleasantly flawed character. Likewise, Miller's Knightley is perfectly serviceable but his performance doesn't quite capture the unexpected heat that develops between him and Emma.

Still, the plot itself unfolds in a leisurely and faithful manner, allowing the diverse cast to each get their moment in the sun as Austen targets the class constraints of Regency England with a precise eye. The colorful cast of characters assembled here includes Michael Gambon, Tamsin Greig, Laura Pyper, Jodhi May, Louise Dylan, Christina Cole, Blake Ritson, and Rupert Evans.

As always Emma's plot is straightforward: Emma yearns to create happiness for those around her but her mischief backfires several times over when she takes the even more naive Harriet Smith (Dylan) under her wing and sets about to match her with the village's dishy vicar (Ritson). And while Emma falls for the dashing Frank Churchill (Evans)--only to have her hopes dashed by a surprising twist--she slowly comes to learn that her truest match is the person who has goaded her into becoming the best possible version of herself.

While this Emma might not be as flashy or modern as its adaptation predecessors, there's still pleasure to be had in its comic grip and it offers perhaps the best way to wind down a weekend of modern-day excess. Or the continual mating rituals of human life, today still fraught with as much peril as they were in Austen's day.

Bella Spruce said…
Clueless and McGrath's "Emma" are both pitch perfect but I am intrigued by this version too. I'm hoping that, because it's longer, we'll get to see a little more story and maybe a broader depth to some of the smaller characters. (No one will every be able to replace Jeremy Northam as Mr. Knightley, though!)
1/22/2010

Anonymous said…
I think it is the Dirty Dancing: Havana Nights actress as Emma that I am having a hard time picturing in a Jane Austen work. Emma is by far my favorite and I typically like the BBC adaptations of Austen, so I will give it a try!
1/22/2010