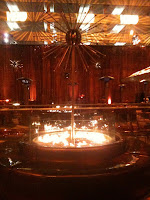 I spent the evening watching the (thankfully) live telecast from home and then went over to the Beverly Hilton for HBO's Golden Globes after-party at Circa 55. As usual, HBO did an incredible job transforming the outdoor space (right at the poolside)... but, rather sadly, the network's handiwork was undone by the weather, rendering the glass-enclosed firepits and open-air seating unusable.

But the party must go on and it was moved under the tents and inside Circa 55 itself, where executives, celebrities, and bon vivants sipped Copper-tinis and Moet et Chandon champagne. Those celebrities included Mad Men's January Jones and Entourage's Jeremy Piven, Modern Family's Eric Stonestreet, Big Love's Chloe Sevigny (Golden Globe-winner Chloe Sevigny, I should say), Ginnifer Goodwin, and Mary Kay Place, True Blood's Anna Camp, Hung's Natalie Zea (with whom I chatted about her role in FX's upcoming drama series Justified), Grace Jones, and many, many others. Spotted at the Hilton on the way into the party: Tina Fey, the cast of Glee, White Collar's Tim DeKay, Busy Philipps, Aaron Paul (of HBO's Big Love and AMC's Breaking Bad), Flipping Out's Jenny Pulos, True Blood's Kristin Bauer, Mad Men's Christina Hendricks (and husband Geoffrey Arend), and... I'm forgetting a ton of others. (Forgive me, I'm still recovering.)

As for the actual telecast itself, it was a mixed bag, really.

I thought that Ricky Gervais' self-deprecating opening bit was absolutely hysterical but there was too little Gervais sprinkled throughout the ceremony, which seemed oddly stiff and rudderless at the same time. After the Hollywood Foreign Press Association made such a big deal about hiring a host for the awards telecast (the first time since 1995), it was odd that the evening seemed so, well, hostless.

I think that Gervais' humor, despite the copious amounts of alcohol flowing at the relatively more laid-back Golden Globes, is perhaps more suited for the Emmys in the end, where his seemingly impromptu comedy killed last fall. Here, there are so many categories to cover in two mediums, a host of celebrity presenters, and a hell of a lot of confusion. I didn't quite feel like Gervais had the MC role over the entire evening but rather just offered a comedic introduction to the evening's festivities.

As for the television awards themselves, I was happy to see both Alec Baldwin and Chloe Sevigny take home statuettes for their respective work in 30 Rock and Big Love. Considering that Big Love got shut out in the other categories--losing Best TV Drama to AMC's Mad Men--I was glad to see that Sevigny was recognized for her honest and soul-baring performance on the last season of Big Love.

I figured that Glee and Mad Men would take home the top prizes in their categories as well, so I wasn't surprised, though I was hoping that Modern Family would have won for Best TV Comedy. Yes, Glee fuses together comedy and music (thus making it perhaps the first honest double contender in the comedy or musical category) but Modern Family definitely deserved to win for its winning comedic chops.

Was happy to see Michael C. Hall win for Showtime's Dexter (would have loved to see Bill Paxton win an award for a change) as well as that for John Lithgow, but I was surprised by Julianna Margulies' win... but then again the HFPA does love to give awards to new series and The Good Wife was the only new drama in that category. Additionally, I was pulling for Edie Falco to win for Best Actress (Comedy) but that accolade went to Toni Collette. Still, very happy with the love very deservedly heaped on Grey Gardens, which won for Best Mini-Series or Motion Picture Made for Television and Best Performance by an Actress in a Mini-series or Motion Picture Made for Television for Drew Barrymore's amazing turn as Little Edie Beale. (Which, incidentally, must be seen and heard to be believed.)

What did you think of the awards? Who were you happy to see win and who would you have rather had take home the statue? Which winner surprised you the most? And who had the best ensemble? Discuss.

Telephoria said…
Drew Barrymore winning was the highlight of the evening for me. She was robbed at the Emmys back in September. Ricky Gervais hosting the show was ridiculous because the Golden Globes are the one award show that doesn't need a host to keep the ball rolling. Also, James Cameron asking everyone to give themselves a round of applause and going on about how they have the best jobs in world was a bit over the top for my personal taste.
1/18/2010

Bella Spruce said…
I think the most surprising (and exciting) win was Chloe Sevigny. The cast of Big Love is brilliant and I'm happy that at least one of them was finally recognized!
1/19/2010