Televisionary Exclusive: First Look at the Pilot Script for NBC's "Rex Is Not Your Lawyer" 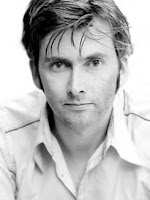 One of the most eagerly anticipated (and constantly buzzed about) pilots of this current development season is NBC's legal dramedy, Rex Is Not Your Lawyer, which stars former Doctor Who star David Tennant as the titular non-attorney.

Given Tennant's stature and his popularity coming off of Doctor Who, expectations are running high for Rex, which had been rumored to be under contention for a March launch on NBC... but is now said to be in the mix for a possible slot on the Peacock's fall schedule. (Or is, off the table, should you believe what an unnamed insider told Entertainment Weekly's Michael Ausiello earlier this week, though that has been unconfirmed.)

Regardless, I had the opportunity yesterday to sit down to read the pilot script for Rex Is Not Your Lawyer, written by David Lampson and Andrew Leeds, and was pleasantly surprised to encounter a quirky and compelling legal dramedy that juggled both a procedural element (the familiar case of the week) with an overarching, serialized plot.

(Note: As always, please do not reproduce this post in full on other sites. Quoting and excerpting are fine, but wholesale reproduction is definitely not okay.)

That ongoing storyline, which would run under the various cases Rex takes on on a weekly basis should Rex be ordered to series, involves not just the panic attacks suffered by Rex (Tennant) that have rendered him unable to act as an attorney, but also pulls in his panic-stricken shrink Dr. Barry Cannon (Jeffrey Tambor), his mother/mentor Ellen (Jane Curtin), his ex-fiancee Lindsey (Abigail Spencer), and his best friend Bruce (Jerry O'Connell). (There's also Rex's oft-put-upon assistant Sophia, played by Lindsey Kraft.)

But Rex isn't just another legal drama. Yes, there are courtroom shenanigans and cross-examinations, but what separates Rex from the pack is the series' underlying formula: Rex doesn't defend any of his clients himself but rather coaches them to defend themselves in court. The rationale behind the twist stems from his unexplained panic attacks, which leave Rex a wreck whenever he attempts to stand or say anything in a courtroom. For a showman such as Rex, one who loves to dazzle his audience, it's the ultimate form of stage fright.

I don't want to give away too much about the plot, other than that there's a nice love triangle developing between Rex, Lindsey, and Bruce, one that's enabled by Rex disappearing to Canada for six months, after his panic attack left him in the hospital. Reeling from Rex's abrupt departure (he takes off when Lindsey goes home to get a shower), Lindsey begins a tentative relationship with Rex's best friend Bruce. But Bruce isn't a stereotypical viper; he's a nice guy who's played second fiddle to showboat Rex for nearly their entire lives. (And, hell, he even goes so far as to ask Rex for permission to date Lindsey.)

My main complaint with the pilot script is that Jane Curtin's Ellen is given a little bit of short shrift here. Other than having a penchant for wearing bow ties and Prada suits and a subplot that has her dating Barry, Rex's now-former psychiatrist, her character is pretty wafer-thin. However, Curtin's astute comedic timing and superlative presence should help out her character's lack of definition. Still, given that it's one of the rare female characters over the age of 30 this development season, I was hoping for a bit more layering to Ellen; we're told that she skipped her sister's funeral to sit for the bar and that she and Rex like to take walks together but I want to see Ellen less as an extension of Rex and more as her own, fully formed individual.

Still, this is a minor quibble. There's a nice lightness to Rex that would separate it from other legal dramas and the lead character is fitting for David Tennant. Prone to hyperbole, dramatic gestures, and brainy discourse, Rex isn't a hotel-inhabiting lawyer embodying the Doctor but rather a compelling character whose both egocentric and sympathetic, a hyper-ambitious attorney knocked down a few pegs and humbled by his panic attacks. I can definitely see (and hear) Tennant in the dialogue and I think he's well suited for a role that calls for him to deliver fast-paced dialogue, steal the spotlight, and yet remain intriguingly vulnerable at the same time.

Rex Is Not Your Lawyer isn't groundbreaking television but it is fun and frothy, offering a novel take on a popular genre. In other words: should NBC decide to pick this up to series, I'd watch.

Anonymous said…
Your article gave me some much needed hope regarding this show. And to top it all, you have that yummy picture of David to accompany it. ;)
1/29/2010

Hadley said…
I agree! (About the post and the picture!)

I've been dying to know if this show was worthy of Tennant's talent and am happy to hear that it just might be and am looking forward to seeing it and hope the rumors of it being off the table are incorrect.
1/29/2010

Fran said…
Glad to hear that the script is good and there's a serialized plot to keep things interesting. Keeping my fingers crossed that this show makes it on air. I'm really looking forward to watching David Tennant on a weekly series.
1/29/2010

pj said…
Thank you so much for this intriguing glimpse into the pilot. I'm even more excited about it now as it sounds like the perfect showcase for David's best qualities. I'd be anxious to hear any news that comes your way about the future prospects of this series.
1/29/2010

Anonymous said…
THANK YOU THANK YOU THANK YOU! tennant fans are desperate for any news concerning this show ! i really hope he comes stateside and does a bunch of talk shows so i can meet him :D and almost as an after thought i hope the show is good haha
1/29/2010

Donna Torchwood said…
Your review has allayed my fears that this series may not be successful -- and given time perhaps Jane Curtain character will be given more depth. Here's to hoping NBC will make the right decision and give Rex a Fall slot.
1/30/2010

World Traveler said…
With all the rumors flying round about the show being "DOA" your article was like a breath of fresh air. David Tennant is a brilliant actor, and this sounds like an excellent show for his gift. Here's hoping that NBC picks this show up and gives it a fair shot.
1/30/2010

Unknown said…
Here's the inside scoop. My friend is an assistant at NBC. She told me that NBC loves the show. They had originally intended on getting it ready for March, but they postponed filming the pilot for a month to cater to David Tennant's schedule. Since they can't have it ready by March now, it will be in contention for the fall.
1/31/2010

emcd said…
sounds thrilling! It's a shame it hasn't been picked up as yet, but if your review is anything to go by it should grab a large audience from word go.
*fingers crossed* :)
2/13/2010