All Saints and Sinners: An Advance Review of Season Two of "Nurse Jackie" 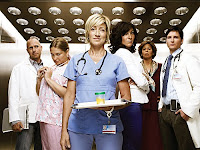 "Why [do] the things that are so bad for you make you feel the best?"

Season Two of Showtime's deliciously dark comedy Nurse Jackie begins tonight and the series, which launched last year, hasn't lost any of its sparkle, wit, or biting charm during its time off. This is after all a series that featured its hero--the overworked and underpaid Jackie Peyton (Edie Falco), a woman willing to cross several lines to save lives and score a fix--flushing a severed human ear down a toilet in its very first episode.

Since then, the series' diverse cast of characters has deepened and grown as we've seen the staff of All Saints Hospital struggle with medical, moral, and marital issues and blossom into appealingly flawed individuals. None more so than Jackie herself, a woman devoted to the profession of nursing who is so caring towards her patients and her family and yet so entirely self-destructive, pushing herself into extramarital relationships, keeping nearly everyone at arm's length, and indulging in any number of prescription drugs filched from the hospital.

The series--created by Liz Brixius, Linda Wallem, and Evan Dunsky--returns tonight with a fantastic installment that picks up a little while after the events of last season's finale, where Jackie's former lover Eddie (Paul Schulze) discovered that she was married and revealed that he had been spending time with her husband Kevin (Dominic Fumusa). Suffice it to say that there's much drama, as well as some hysterical dark humor, lurking just around the corner.

While I've seen the first eight episodes of Nurse Jackie's second season provided to press for review, I'll focus for now on the first four installments of what promises to be a fantastically taut season. Minor spoilers follow but none that will derail your pleasure with this incredible comedy series.

As mentioned earlier, Season Two of Nurse Jackie finds Jackie attempting to process the implications of what Eddie has revealed and her fear that Eddie will tell Kevin about their affair continues to haunt her. In the first episode back, a day at the beach with Kevin and their two daughters--sweet little Fiona (Daisy Tahan) and anxious Grace (Ruby Jerins, once again astonishing)--turns into something darker as Jackie believes she sees Eddie watching her. But while Eddie might not be at the beach, he does force his way back into Eddie's life in these episodes in a way that's both shocking and pathetic. (It really had to be seen to be believed.)

Despite her horror that Eddie could destroy her marriage, Jackie hasn't stopped abusing prescription medication. Her addiction is both an enabler--it gives her the energy to deal with her work and home lives--and a crutch, as Jackie can't seem to function with daily life without repeated self-medication. It's another way at building a wall between her and Life. But it's also made her a target, following the hiring of Sam (Arjun Gupta), a recovering addict who viewers will remember from Season One. Jackie's distrust of Sam, as well as her fear of exposure, put them immediately at odds and Sam's holier-than-thou attitude doesn't help matters.

Once again, her sole confidante is Dr. Eleanor O'Hara (Eve Best), the wealthy British doctor whose penchant for Hermes scarves and generous gifts seems to lead her into trouble this season. Still reeling from the death of her mother at the end of the first season, O'Hara seems desperate to connect to someone in a way that's inimically opposed to Jackie herself.

Likewise, Fitch Cooper (Peter Facinelli) seems desperate to manufacture friendships with the people he works with, especially after he lands on New York Magazine's list of the Top 25 doctors in New York City, a fact that gets under the skin of Jackie, O'Hara, and, well, everyone at the hospital. If you thought Coop was unbearable before, just wait until he starts tweeting about life at the hospital and his new position in the medical community. Credit goes to Facinelli for being willing to play the butt of many jokes and for playing Coop with such realistic awkwardness. Coop is so desperate for friends... and yet so unable to see just how repugnant and unlikeable he truly is to everyone.

These episodes also deliver two intriguing subplots for one of my favorite characters, Merritt Wever's fantastically naive Zoey Barkow as Zoey finds herself pushed into adulthood when she must act quickly--and illegally--to save the life of a dying child and when she... Well, that would be telling. But the reveal of that second subplot is one of the great moments of the new season. Kudos to Wever for once again effortlessly making Zoey adorable and sympathetic as well as funny. Her pronunciation of Hermes is priceless as is her discussion with the mentally disturbed man (who calls himself "God") who lives across the street from the hospital.

Season Two also deepens the supporting characters at All Saints, giving Anna Deavere Smith's Gloria Akalitus some real grit and depth this season (I felt that the first season often made her too cartoonish rather than real) and allowing her to open up about her own personal life. There's a gorgeous scene between Akalitus and O'Hara in the third episode that proves that Akalitus isn't really the crabby administrator she makes herself out to be and a moment of real truth as she attempts to break through Jackie's armor by revealing something about herself.

The departure of Haaz Sleiman's Mo-Mo (off-screen and only alluded to in passing) is eased by the arrival of Sam and the very welcome prominence of Stephen Wallem's Thor, whose diabetes plays a role in the first two episodes of the season. His "wedding cake addiction" also sheds a light on the bad things that we all do that make us feel better. While Thor's isn't as bad as, say, Jackie's addiction, it provides a strong case against giving into temptation.

Which is a lesson that Jackie could definitely learn from, though her deep flaws are what make Falco's Jackie such an incredibly nuanced and unpredictable character. For a woman who is more sinner than saint, it's likely to be a season in which her moral code is further tested as the walls continue to close in on her. Just what the addict nurse will do when faced with uncertainty and the threat of discovery on multiple fronts remains to be seen. But one thing is for sure: I'm very gladly along for the ride.

Bella Spruce said…
Nurse Jackie had a shockingly brilliant first season and I'm so happy to hear that season two is equally as good. I can't wait!
3/22/2010