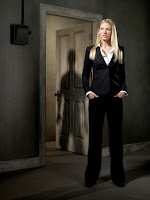 Good news for Fringe fans: the Pattern will be continuing next season. FOX has officially renewed the drama series for a third season this fall. "Fringe tapped into a deep creative mine this year that built momentum throughout the season and helped give us our first real foothold on TV’s most competitive night,” said Kevin Reilly, President, Entertainment for Fox Broadcasting Company, in a statement. "The entire Fringe team – from the producers and writers to the cast and crew – has taken smart storytelling and top production quality to a whole new level. The rest of this season is mind-blowing, and we can’t wait to get started on the third installment of this amazing journey." Meanwhile, Fringe resumes with eight all-new episodes on Thursday, April 1st. (via press release)

The Guardian's Simon Hattenstone has a huge profile of new Doctor Who star Matt Smith, who takes over the mantle of the Doctor from former star David Tennant next month when Season Five of Doctor Who launches on BBC One and BBC America. "He's a little reckless," said Smith of his take on the Doctor. "He'll walk into a room and have a million things to do. And, as opposed to knowing exactly how to get out, he'll take it up to the precipice: don't know, don't know, don't know, and boom, there's the idea. And it's a bit mad and reckless. It's very doof, doof, doof. And he's got a companion who I think is the hardest to handle. And she's quite mad. But the Doctor's quite mad as well. So together..." (Guardian)

Wondering what will happen to Season Three of Party Down now that Adam Scott has been cast in NBC's Parks and Recreation? You're not alone. Alan Sepinwall tracked down executive producer Rob Thomas to find out what's going on. "Adam will be allowed to do three guest star spots for us," Thomas told Sepinwall. "We can definitely still do the show without Adam, though we're all collectively entering about the third stage of grief over here. We'd much, much prefer to be doing the show with him. Adam hated leaving the show, but they made him an offer he couldn't refuse, and in a world where our Party Down future isn't guaranteed, he understandably felt like he needed to take the offer. We've been told that in order to return for a third season, our second season numbers need to come up from where they were. We're praying that, even with Adam gone, Starz continues with a big marketing campaign for Season Two." The second season of Party Down will premiere next month on Starz. (What's Alan Watching)

Academy Award winner Kathy Bates is reportedly in final talks to topline David E. Kelley's NBC legal drama pilot Kindreds in a role that was originally written for a man. Bates, currently in the middle of a multiple-episode story arc on NBC's The Office, would play a "curmudgeonly former patent lawyer." (Hollywood Reporter)

Entertainment Weekly's Michael Ausiello is reporting that Jesse Plemons will not be returning full-time for Season Five of Friday Night Lights after his contract option was not picked up. "With Jesse — as with previous cast members who have moved on — Pete Berg, myself and the producers of the show let the storytelling guide us, and we feel we didn’t have substantial enough storylines to justify keeping such an immensely talented actor from pursuing what we know will continue to be a very successful career," executive producer Jason Katims told Ausiello. "Jesse has created one of Friday Night Lights' finest and most beloved characters, and I can tell you this was not an easy decision." (Entertainment Weekly's Ausiello Files)

Breckin Meyer (Robot Chicken) and Mark-Paul Gosselaar (Raising the Bar) have been cast as the leads in TBS' one-hour comedy pilot Franklin & Bash, about two best friends who are street lawyers and who are recruited to work at a white-shoe firm. Project, from Sony Pictures Television, is written by Kevin Falls and Bill Chais, who will executive produce alongside Jamie Tarses. Elsewhere at TBS, Tim Meadows and Kelly Blatz have joined the cast of comedy pilot Glory Daze, where they will star alongside Julianna Guill, Callard Harris, Matt Bush, Hartley Sawyer, and Drew Seeley. (Hollywood Reporter)

Kyle Bornheimer (Romantically Challenged) has landed the lead in CBS' untitled comedy pilot from Carter Bays and Craig Thomas about an unmarried couple and their friends living in Pittsburgh. Bornheimer, whose participation here is in second position to ABC's Romantically Challenged, will play Tommy, described as "the lovable, slightly unkempt and highly entertaining half of the couple who means well but doesn't always finish what he starts." (Hollywood Reporter)

ABC has named Brooke Burke as the co-host of Dancing with the Stars. The Season Seven winner will appear alongside Tom Bergeron for the Spring 2010 season of Dancing, which launches Monday, March 22nd. (via press release)

WABC and Cablevision were able to reach an eleventh hour retransmssion deal last night, just in time for the first award to be presented at last night's Academy Awards telecast. "We've made significant progress, and have reached an agreement in principle that recognizes the fair value of ABC7, with deal points that we expect to finalize with Cablevision," said WABC prexy/GM Rebecca Campbell in a statement. "Given this movement, we're pleased to announce that ABC7 will return to Cablevision households while we work to complete our negotiations." (Variety)

Another project is rolling over into next year: CBS confirmed that it had pushed its untitled Tad Quill comedy to the next development season after it was unable to cast its central character, the widowed father of a 12-year-old boy. (Hollywood Reporter)

ABC Family has acquired the first broadcast window for Tim Burton's Alice in Wonderland, securing the rights from Walt Disney Co. to begin airing the feature film in 2012 in a deal that is believed to be more than $20 million. (The Wrap's TVMoJoe)

Anonymous said…
How many pilots is that now that have been pushed back because of casting trouble? With so many actors in Hollywood you really wouldn't think this would be such a problem.
3/08/2010