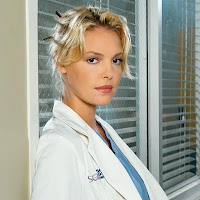 Entertainment Weekly's Michael Ausiello is reporting that Katherine Heigl will be departing Grey's Anatomy for good this time, citing unnamed sources. "Series creator Shonda Rhimes has agreed to release the fast-rising movie star from her contract. It’s now up to ABC Studios and Heigl’s reps to hash out a final exit agreement," writes Ausiello. "After taking more than half of the current season off to make another movie and connect with her adopted daughter, Heigl was scheduled to return to the Grey’s set on March 1 to begin work on the five remaining episodes of the season. There’s just one problem: March 1 came and went and there was no Heigl." Long story, short: Heigl's final episode as Izzie has already aired and Heigl will not be returning to the set of Grey's Anatomy. (Entertainment Weekly's Ausiello Files)

UK network E4 has commissioned two additional seasons of teen drama Skins, the series' fifth and sixth, and has announced that it will once again replace the cast with new actors following the fourth season (which wraps up in the UK next week but has yet to air Stateside) and will hold open auditions next month. "Skins has always been about new talent, both on and off screen, and the decision to recast the series every two years is one of the reasons Skins stands out," said Channel 4's head of drama Camilla Campbell. "Now another group of teenagers will have the rare opportunity to be part of a British drama series that says something about their lives and is one of the most exciting shows on television. I can't wait to find out who they will be." (BBC News)

Alan Tudyk (V, Dollhouse, Firefly) will star opposite Dermot Mulroney in NBC drama pilot Rockford Files, an update of the 1970 private investigator series that is written by by David Shore (House). Tudyk will play Detective Dennis Becker, a friend of Jim Rockford (Mulroney) who is said to be a little embarrassed by his friendship with Rockford as the other cops all hate him. (Hollywood Reporter)

Take with a large grain of salt. British tabloid The Sun is reporting that Nintendo has signed a contract with BBC Worldwide to bring its iconic series Doctor Who to Wii and DS consoles later this year. "This has been in the pipeline for years," said an unnamed insider quoted by the paper. "We're delighted to have finally nailed down a deal. We went with Nintendo as they have huge appeal for families and Doctor Who is very much a family brand. The Wii console is key for us as it's something families play together." [Editor: Don't get excited just yet. I'd be extremely surprised if a game were able to be produced by this Christmas, just nine months away, as The Sun contends, should this actually be true.] (via Digital Spy)

Jon Voight (24) has signed on as one of the leads in FOX drama pilot Midland, where he will play a Texas oil tycoon described as "a gravely voiced titan equally at home in boots or a three-piece suit." Move marks the first TV series regular role for Voight. Also cast in the 20th Century Fox Television-produced pilot: David Keith (The Class), who will play the con-man father of Jimmy Wolk's Bob. (Hollywood Reporter)

TV Guide Magazine's Will Keck is reporting that Jennifer Morrison will be returning to FOX's House, on April 12th episode directed by Hugh Laurie... and next season. "There have been discussions of me doing a few episodes next year based on what they end up writing," Morrison told Keck. "Contractually, they’ve guaranteed me a certain number of episodes next year - I think three or four, which means that they’re probably very much leaning toward writing a storyline for the character." (
TV Guide Magazine)

Constance Zimmer (Entourage) and Kat Foster ('Til Death) have been cast in TBS hour-long comedy pilot In Security, which centers on two sisters who inherit their father's private-security firm. The attachment of Zimmer and Foster lifts the casting contingency on the pilot. Elsewhere at TBS, Malcolm McDowell will star opposite Breckin Meyer and Mark-Paul Gosselaar in comedy pilot Franklin & Bash, where he will play the senior partner at the law firm where street lawyers Jared (Meyer) and Steven (Gosselaar) are hired. (Hollywood Reporter)

In other pilot casting news, Patrick J. Adams (Weather Girl) and Danneel Harris (One Tree Hill) have been cast as the leads in NBC comedy pilot Friends With Benefits, about a group of friends who are looking for love but settle for something else in the meantime. Adams will play Ben, described as "an Everyman who, while waiting for Ms. Perfect to come along, enjoys a relationship with Sara (Harris), a doctor trying to find Mr. Right." They join the already cast Fran Kranz in the 20th Century Fox Television-produced comedy pilot, written by Michael Weber and Scott Neustadter and directed by David Dobkin. (Hollywood Reporter)

TV Guide Magazine's Will Keck has a first look at how Betty Suarez (America Ferrera) will get her braces off on Ugly Betty's March 24th episode. Hint, it involves a million-dollar bra, the Guggenheim Museum, and a collision. "I chipped my front tooth rehearsing this scene - and it hurt!" Ferrera told Keck. "I thought how incredibly ironic that I mess up my tooth in the episode where Betty's smile is supposed to be perfect and there are extreme close-ups of my mouth." (TV Guide Magazine)

VH1 has ordered ten episodes of docudrama The Tournament, which will follow Chad Ochocinco as he travels the country to find love with 85 women who will compete for his affects "via a March Madness bracket." Series, slated to launch in July, is from JUMA Entertainment and 51 Minds Entertainment. (Variety)

Production has begun on BBC One's three-part drama Sherlock, a modern-day update of Sir Arthur Conan Doyle's iconic detective Sherlock Holmes, from writers/executive producers Steve Moffat, Mark Gatiss, and Steve Thompson, directors Euros Lyn and Paul McGuigan. Project stars Benedict Cumberbatch, Martin Freeman, and Rupert Graves. "Everything that matters about Holmes and Watson is the same," said Moffat. "Conan Doyle's stories were never about frock coats and gas light; they're about brilliant detection, dreadful villains and blood-curdling crimes – and frankly, to hell with the crinoline. Other detectives have cases, Sherlock Holmes has adventures, and that's what matters. Mark and I have been talking about this project for years, on long train rides to Cardiff for Doctor Who. Quite honestly, we'd still be talking about it if Sue Vertue of Hartswood Films (conveniently also my wife) hadn't sat us down for lunch and got us to work." (BBC)

Radical Media, the production company behind Sundance Channel's Iconoclasts, is said to be gearing up for more television development, including a docusoap following the dancers of the Miami City Ballet, the Oprah Winfrey-hosted Masterclass, and a series adaptation of Stephen Dubner and Steve Levitt's best-selling nonfiction book Freakonomics, which would "investigate a wide range of topics: from the inner workings of a crack gang to whether walking drunk is more dangerous than driving drunk." Project is currently being shopped to networks. (Variety)

The Wrap's Josef Adalian is reporting yet more changes afoot in the executive roster at Oprah Winfrey and Discovery Communications' nascent cable network OWN, with Jamila Hunter stepping down from her position as head of programming to segue into a new role at the network. Programming will now be overseen by three new hires: Rod Aissa, Michele Dix, and Drew Tappon, all of whom will report to COO Lisa Erspamer. (The Wrap's TVMoJoe)

jen said…
A Doctor Who Wii game?! How cool would that be? If it were Matt Smith voicing, it'd be great. If it were David Tennant ... well, that would just be awesome. Let's all cross our fingers. Thanks for the heads up!
3/12/2010

Piper said…
Love the idea of a Doctor Who Wii game!

Tonya Ricucci said…
Dermot Mulroney as Jim Rockford??? bleah. Now why couldn't Alan Tudyk get the Rockford role? that would be much more entertaining.
3/12/2010