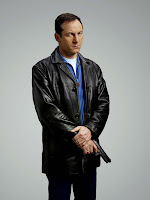 Jason Isaacs is heading to network television. After several years of offers, Isaacs (Green Zone and the Harry Potter films) has signed on to star in a broadcast network pilot. Isaacs, who last starred in Showtime's Brotherhood before it ended in 2008, has come aboard FOX legal drama pilot Pleading Guilty, based on the Scott Turow book of the same name. Isaacs will play the lead, Mack, a former cop and current attorney who is described as "a big handsome Irish lunk" and who investigates the disappearance of his firm's star litigator. Isaacs' attachment removing the casting contigency on the project, which hails from 20th Century Fox Television and Chernin Entertainment and which is being shepherded by Bones creator Hart Hanson. (Hollywood Reporter)

HBO has given a series order to fantasy drama Game of Thrones, based on George R.R. Martin's beststelling novel series. Project, written by David Benioff and D.B. Weiss, and directed by Tom McCarthy, will head to HBO in spring of 2011. (Televisionary)

Looks like Matt LeBlanc has some company in his upcoming Showtime/BBC comedy series Episodes, which has been ordered for seven installments. Claire Forlani (CSI: NY), Kathleen Rose Perkins ('Til Death), and Stephen Mangan (Green Wing) have been cast opposite LeBlanc in the comedy series, which revolves around a British husband-and-wife writing team (Forlani and Mangan) who travel to America to produce a US version of their hit UK series. Series, from executive producers David Crane and Jeffrey Klarik, is due to begin production in May. (Hollywood Reporter)

Michael Imperioli--last seen as a series regular on ABC's short-lived Life on Mars--has been cast as one of the leads in ABC cop drama pilot 187 Detroit, where he will play Fitch, described as "a smart, tough-minded veteran detective with a short fuse who has a near-perfect record for clearing cases and putting murderers in cages." (Hollywood Reporter)

Lost fans will have the opportunity to become part of Lost history by participating in a promotional contest that could have an original promo air on ABC. Participants can visit ABC.com to create and submit their own original 35-second promo, which will then vie for the opportunity to be broadcast on-air in the week leading up to the final episode of Lost and the Grand Prize winner will receive a trip to Los Angeles to attend the series’ special finale party. (via press release)

Entertainment Weekly's Lynette Rice is reporting that ABC has passed on Mark Gordon's small-screen version of post-apocalyptic film 2012, which would have revolved around survivors of the global disaster. "Future production costs may have been a factor in ABC’s decision, though the status of the network’s other high-concept genre shows (FlashForward, V) could have played a role, too," writes Rice. "Both shows struggled in the ratings last fall and have yet to receive a second season pickup. A spokeswoman for ABC declined to comment." (Entertainment Weekly's Hollywood Insider)

Pilot casting news: Jon Seda (The Pacific) will star opposite Roselyn Sanchez in Michele Fazekas and Tara Butters' ABC dramedy pilot Cutthroat; Jesse Bradford (The West Wing) has come aboard NBC's untitled John Eisendrath drama pilot (a.k.a. Rough Justice); Jason Behr (Roswell) and Merle Dandridge (24) have joined the cast of ABC drama pilot The Matadors; Lindsay Price (Eastwick) has landed one of the leads in ABC comedy pilot Who Gets the Parents?, opposite Jane Kaczmarek and Adam Arkin; Eliza Coupe (Scrubs) has joined the cast of ABC comedy pilot Happy Endings; Missi Pyle (Grey's Anatomy) and Johnny Sneed (Unhitched) have been cast as the leads in ABC comedy pilot How to Be a Better American; and and Diedrich Bader (Bones) and Jessica Gower (Blade: The Series) have boarded NBC comedy pilot Outsourced. Meanwhile, CBS has rolled over its untitled Redlich/Bellucci drama (a.k.a. The Rememberer) to next season due to difficulties casting the lead. (Hollywood Reporter)

In other casting news, Jason George (Grey's Anatomy) has been cast in Shonda Rhimes' ABC medical drama pilot Off the Map, where he will play Dr. Otis Abbot, described as "a brilliant ER doctor at the clinic who likes women, cigarettes, and the occasional dirty joke and works closely with the clinic's founder, Ben Hanley (Martin Henderson)." (Hollywood Reporter)

Comedy Central has given a series order to comedy Workaholics, ordering ten episodes. Series, from writer/executive producer Kevin Etten, revolves around a group of twenty-somethings who are poised between college and adulthood. Cast includes Blake Anderson, Anders Holm, and Adam Devine. (Variety)

In other Comedy Central-related news, the Viacom-owned network has pulled all of its programming off of Hulu, including The Daily Show with Jon Stewart and The Colbert Report. Viewers will be now only able to watch episodes of both series on the Comedy Central website. (Variety)

Production is slated to begin this month on Season Two of Syfy drama series Warehouse 13, which will launch its second season on Tuesday, July 13th. Eddie McClintock, Joanne Kelly, Saul Rubinek, Allison Scagliotti, and CCH Pounder will all reprise their roles next season. (via press release)

Looks like ABC's The Forgotten will be heading out the door a little earlier than expected. The network has opted to pull the March 23rd episode from the schedule, making next week's episode the season finale... and, barring some unforeseen development, the end of the series. (Hollywood Reporter's The Live Feed)

Universal Media Studios has signed a two-year deal with Jon Pollack (Community, 30 Rock), under which Pollack will oversee two comedy pilots for next season: romantic comedy Perfect Couples (which he co-wrote with Scott Silveri) and the untitled Adam Carolla comedy pilot. (Variety)

History will spin-off its reality series Pawn Stars into a franchise, launching version of the series in New York and Miami. (Hollywood Reporter)

Access Hollywood is coming to daytime via a new hour-long series Access Hollywood Live, which will be stripped beginning this fall in such markets as New York, Los Angeles, and Chicago. (Variety)

Piper said…
The new Matt LeBlanc series sounds so...odd. Not sure what to make of it. Maybe if it had a different cast it would make more sense.
3/03/2010