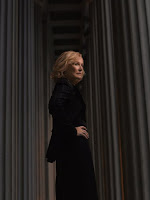 Entertainment Weekly's Michael Ausiello is reporting that the fate of FX's serpentine legal thriller Damages, set to wrap its third season in two weeks' time, is in the hands of DirecTV. "Multiple sources confirm to me exclusively that Sony is talking to DirecTV’s 101 Network about partnering on a possible fourth season of Damages," writes Ausiello. "The cost-sharing arrangement would be similar to the one DirecTV and NBC forged with Friday Night Lights, which means future seasons of Damages would air first on DirecTV with a second window on FX." An unnamed source further tells Ausiello that Sony Pictures Television began talks with DirecTV after it became untenable to maintain financing Damages on its own and the studio has engaged in talks with other outlets as well. Both FX and Sony refused to comment for the story. (Entertainment Weekly's Ausiello Files)

The Chicago Tribune's Maureen Ryan has a fantastic interview with Chuck co-creator/executive producer Chris Fedak about the remainder of the third season, the series' chances at a fourth go-around, and Brandon Routh's Daniel Shaw. "I’m very happy with [it]," said Fedak about Chuck's third season. "We’re very excited by the way we’ve structured this season. It starts out with some darks spots in the season, we have gone dark, we’ve tested the premise of the show, especially with "Chuck Versus the Final Exam," which aired last Monday. And [Monday's] episode, "Chuck Versus the Other Guy" -- all these episodes are really kind of testing the premise of the show, testing the idea of what we can do on the show. But from the perspective of the overall season, I think that we’re going to a really neat place and we’re having a lot of fun with it. We’re very excited that we’re able to tell such a dynamic story this season. But in truth, [it is] dynamic and also challenging." [Editor: It's a great and lengthy interview, so be sure to read through to the end. Lots of great moments.] (Chicago Tribune's The Watcher)

In other Chuck-related news, I was so sad to miss this weekend's Chuck panel at WonderCon in San Francisco. But if you--like me--missed out on the festivities, you can ready ChuckTV's in-depth panel report. You'll feel just like you were there, I promise. "Because they already had one season finale (3.13) written before learning that they had another six episodes, they essentially got to have two season finales in one season," writes ChuckTV's Mel. "Chris [Fedak] reiterated that no one is safe." (ChuckTV.net)

Lost showrunners Damon Lindelof and Carlton Cuse will be sitting down with ABC's Jimmy Kimmel for an exclusive hour-long postshow special, entitled Jimmy Kimmel Live: Aloha to Lost, where they will be joined by many cast members from the ABC Studios-produced drama series, which is set to end its run on May 23rd. Plus, ABC has promised that they will be airing alternate endings to Lost on the special as well. (E! Online's Watch with Kristin, The Wrap's TVMoJoe)

Entertainment Weekly's Michael Ausiello has an exclusive first-look at True Blood's werewolf Alcide, played by One Tree Hill's Joe Manganiello, shown in a shot from Season Three alongside Anna Paquin's Sookie Stackhouse. "There is definitely some [sexual] energy between the two of them," True Blood's executive producer Alan Ball told Ausiello. "It’s not like either one of them is looking for romance, but they’re thrown into several intense situations [and] it’s hard not to bond on a deeper level." (Entertainment Weekly's Ausiello Files)

The Los Angeles Times' Irene Lacher has an interview with Damages' Lily Tomlin, the latest in the paper's Sunday Conversations series. "I don't see any difference, really," said Tomlin about shuttling back and forth between comedy and drama. "It's just a matter of style or degree. And I've listened to Marty [Short, who plays the Tobins' devious lawyer], and he has the same point of view. You're just going to try to represent the human who's written on the page." (Los Angeles Times)

Pilot casting update: Tisha Campbell-Martin (Rita Rocks has been cast as a regular on ABC comedy pilot Wright vs. Wrong, where she will star opposite Debra Messing and will play the stylist to Messing's political pundit Evelyn Wright; Duane Martin (All of Us) has come aboard Paul Reiser's NBC comedy pilot Next, where he will play Reiser's best friend, a restaurateur; Jonathan Slavin (Better Off Ted) has been cast in CBS comedy pilot Team Spitz; Tyler James Williams (Everybody Hates Chris) has been cast in NBC comedy pilot Our Show; and Dejan Loyola (The Troop) has landed a role in the CW drama pilot HMS. (Hollywood Reporter)

For Slavin, the casting is formally in second position to "Ted."

The Futon Critic is reporting that TNT will launch Jason Lee-led drama series Memphis Beat (formerly known as Delta Blues) on Tuesday, June 22nd at 10 pm ET/PT, behind the second season premiere of HawthoRNe. Later during the summer, the cabler will launch Season Two of Dark Blue (in August, specifically) and Rizzoli & Isles. (Futon Critic)

BET is said to be close to a deal to resurrect canceled CW comedy series The Game and is expected to announce the pickup at its upfront later this month, according to The Hollywood Reporter's Nellie Andreeva, who writes that the majority of the comedy series' cast will be returning for this new iteration and that Salim Akil will take over showrunner duties from his wife, Brock Akil, now a consulting producer on ABC's Cougar Town. (Hollywood Reporter)

Universal Media Studios has signed a two-year overall deal with former My Name is Earl writer/producer Danielle Sanchez-Witzel, under which she develop new series projects for the studio while joining an existing NBC series. (Hollywood Reporter)

Amanda said…
Wow. That would be great if DirecTV saved Damages. Of course, I don't have DirecTV but I guess I'd rather wait and see it eventually on FX than not have it at all. Especially as this season has been so good!
4/05/2010