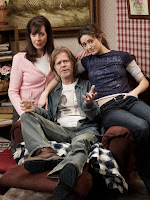 Showtime has ordered twelve episodes of ensemble drama Shameless, based on the British Channel 4 drama series created by Paul Abbott, who co-wrote the pilot for the US adaptation with John Wells. Project, which is expected to begin production late this summer, stars William H. Macy, Emmy Rossum, Justin Chatwin, Jeremy White, Cameron Monaghan, Ethan Cutkosky, Emma Kenney, and Allison Janey, who recurs. Wells will serve as showrunner on the series, which hails from Warner Bros. Television and John Wells Productions. No launch date was announced for the series, which Showtime's Robert Greenblatt likened to "Party of Five on acid." (Variety)

HBO, meanwhile, ordered ten episodes of single-camera comedy Enlightened (including the pilot) from writer/executive producer Mike White and star/executive producer Laura Dern. Dern stars as "a self-destructive woman who has a revelatory experience at a treatment center and becomes determined to live an enlightened life, creating unexpected havoc at home and work." The cast also includes Luke Wilson, Diane Ladd, and Sarah Burns; production is slated to begin this summer. (Hollywood Reporter)

Entertainment Weekly's Michael Ausiello is reporting that FX president John Landgraf has confirmed that Sony Pictures Television is in talks with DirecTV to come aboard legal drama Damages in order to ensure a fourth season pickup. "Sony is talking to DirecTV," said Landgraf. "We couldn’t be happier with Damages creatively. The third season is superb. It’s a massive success from a creative standpoint. But, it’s a show that has always struggled from a ratings standpoint. I think that’s because it’s so complicated. It takes an incredible amount of devotion and an incredible attention span to watch it." (Entertainment Weekly's Ausiello Files)

Ausiello also confirms that the feature film version of Veronica Mars isn't dead, after all, talking to the series' creator Rob Thomas about the status of the teen sleuth. "It’s not dead," Thomas told Ausiello. "I continue to want to do it. It’s funny, because the rumors go around and around. Kristen Bell had said to somebody that I had written a script, and that wasn’t correct. I did have a treatment and a pitch, with which I went to Warner Bros. and [Mars producer] Joel Silver and said, ‘Here is the fastball version of the movie, the big studio version of the movie that I think we can make.’ And I think they did one of their brand-awareness surveys and were like, ‘We don’t know if we can make money with that.’ So it’s been back-burnered. But I still want to do it. I’m still happy to do it. We’re still looking into it." [Editor: While Thomas admits there's a close-ended timeframe, I do like his idea to see Bell as a "30-year-old noir detective" in the future as well.] (Entertainment Weekly's Ausiello Files)

It's official: Doctor Who is heading to PC and Mac in a new episodic computer game entitled Doctor Who: The Adventure Games that will be offered for free from the BBC website. Featuring the voices of Matt Smith and Karen Gillan, the four-episode interactive game will be written by Phil Ford (Doctor Who: The Waters of Mars) and James Moran (Torchwood: Children Of Earth). The first episode is expected to be released in June. "There aren’t 13 episodes of Doctor Who this year," said executive producer Piers Wenger. "There are 17 - four of which are interactive. Everything you see and experience within the game is part of the Doctor Who universe: we’ll be taking you to places you’ve only ever dreamed about seeing - including locations impossible to create on television." (Broadcast)

Oprah Winfrey is set to announce an hour-long evening series Oprah's Next Chapter, which will air on the nascent cabler OWN: The Oprah Winfrey Network, according to the Wall Street Journal's Sam Schechner. Series, which could air as many as twice or thrice during the week, will follow Winfrey as she travels the world for a series of interviews. "I'm going to take viewers with me, going to take celebrities I want to interview with me" around the world," said Winfrey. (Wall Street Journal)

ABC has announced its summer schedule, which includes the launch of two new drama series on Sunday nights--The Gates and Scoundrels--which will air back-to-back beginning at 9 pm ET/PT on June 20th. The Bachelorette returns Monday, May 24th, True Beauty on May 31st, Wipeout on June 1st, and the launch of new reality competition series Downfall on June 29th. Late summer brings The Bachelor: Bachelor Pad, Dating in the Dark, and Shaq Vs. (Variety)

SPOILER! Orla Brady will reprise her role as Elizabeth Bishop in Fringe's two-part season finale ("Over There, Part 1" and "Over There, Part 2,"), which are set to air May 13th and May 20th. (Entertainment Weekly's Ausiello Files)

Francois Arnaud (I Killed My Mother) has been cast in Showtime period drama series The Borgias, where he will play Cesare, the son of Rodrigo Borgia (Jeremy Irons) in the thirteen-episode series. (Hollywood Reporter)

Broadcasting & Cable's Alex Weprin has a rundown on the announcements made at yesterday's FX upfront presentation in New York. "I think it is important to talk about the originals in basic cable as a continuum, from the edgy, adult side of it, which we cornered the market with The Shield and Nip/Tuck, to the other end of the spectrum, which would include The Closer or White Collar," said Bruce Lefkowitz, executive VP of Fox Cable ad sales. "We are never going to be all the way to the right side, we are never going to do The Closer, because that is not what audiences come to FX for, but we have earned the right to move a little bit more to the right."(Broadcasting & Cable)

ITV has announced that Ciarán McMenamin, Alexander Siddig, and Ruth Kearney will join the cast of Primeval, which is being co-produced by ITV, UKTV, and BBC America. Hannah Spearritt, Andrew-Lee Potts, Ben Miller, and Ben Mansfield will reprise their roles on the sci-fi drama, which is set to launch in early 2011. (Digital Spy)

The Hollywood Reporter's James Hibberd offers a suggestion about why the ratings for FX's fantastic drama series Justified continue to slide each week: "My take is that the show was promoted with a serious dramatic tone, which matched its pilot, plus it felt like a serialized show. Subsequent episodes have felt lighter, more comedic, more procedural -- less FX and more USA." (Hollywood Reporter's The Live Feed)

Maura Tierney is set to return to television following her battle against breast cancer. The actress--who was originally part of the cast of NBC's Parenthood before having to drop out to seek medical treatment--will reprise her role as Kelly McPhee on FX's Rescue Me and is slated to film four episodes for the series' seventh season, set to air in 2011. (Variety)

HBO has acquired the US rights to Adrian Grenier's documentary Teenage Paparazzo, which focuses on 14-year-old paparazzo Austin Visschedyk. (Variety)

AskRachel said…
"Party of Five on acid?" I'm in!

Americana Confiscated said…
I am usually a fan of all things William H Macy...(That creepy movie where he goes nuts and kills a girl, then ends up looking like a pint-sized Jamie Heinneman smooching his big black cell mate notwithstanding) the man is NO Vernon Francis Gallagher. Showtime should just run the original. There's no way they can make an Americanized version of it that will be half as good. It will suck like the Americanized version of Death At A Funeral.
4/19/2010