Ah, HBO, you are generous.

Not only does today mark the launch of the first "Drop of True Blood" minisode featuring Eric and Pam auditioning a new dancer for Fangtasia (which can be viewed in full here), but the pay cabler has also unveiled the official Season Three poster for True Blood, which returns to the schedule next month.

The seductive swamp-set scene depicts Anna Paquin, Stephen Moyer, Alexander Skarsgard, Kristin Bauer, Nelsan Ellis, Deborah Ann Woll, Rutina Wesley, Sam Trammell, and Ryan Kwanten assembling at twilight as a wolf and a sickeningly long snake look on, perhaps ready to sink their teeth into this pretty cast. (There are also several smaller snakes and some skulls lurking about, if you enlarge the photo.)

A larger version of the image can be found by clicking on the image below. 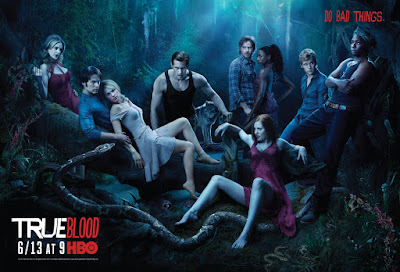 "Do Bad Things," indeed. Satisfied? Or hungry for more?