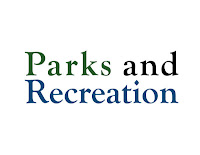 "Leslie's gone from big ideas to triage really fast," said Amy Poehler about the upcoming storyline on Parks and Recreation that finds Adam Scott and Rob Lowe arriving in Pawnee beginning May 13th.

Adam Scott and Rob Lowe will play state auditors from Indianapolis who arrive in Pawnee to attempt to solve the budget crisis in Pawnee. "Adam and Rob's characters have a good cop/bad cop dynamic," said co-creator/executive producer Mike Schur. (Lowe wasn't in attendance at the NBC press day panel, due to filming on Brothers & Sisters.)

The upcoming storyline on Parks and Recreation is ripped from the headlines, with stories appearing of municipalities going bankrupt, which manifests itself when "Pawnee finds itself in real financial trouble," according to Amy Poehler. "It deals with the impact of real people losing their jobs and the comedy of deciding which programs should stay and which should go."

Scott's character, Ben, has a talking head about his relationship with Lowe's character, Chris. "We used to work separately and he would get nothing done and I would get death threats," recalled Scott. "It seems to work better together." (Incidentally, Ben wants to gut the Pawnee's overblown budget "with a machete" in his first episode, airing next month.)

Could Aziz Ansari's Tom Haverford be in trouble with auditors looking to trim the fat? Ansari said that "a lot of people" could be in danger of losing their jobs and that Tom's future will be addressed next season and specifically in the fourth episode of Season Three of Parks and Recreation.

Schur wanted to spoil more but was cut off by Nick Offerman. "I think you've said enough," said Offerman, who is unofficially the spoiler police for Parks and Recreation.

Ansari revealed that he's a fan of "old-school TV crossovers" and has pitched an episode about a serial killer on the loose in one of Pawnee's parks which will require The Mentalist's Jane to drop by and solve the murders... and one in which we meet Tom's brother, Chandler Bing. "Ring a bell?" (He's joking, people.)

SPOILER! Poehler has written an upcoming episode about an annual all-night diabetes fund-raising telethon and Leslie attempts to "waste time and stay awake" when Tom takes the star (ex-Indiana Pacers basketball player Detlef Schrempf) to the club and Leslie finds herself awake for 38 hours straight after staying up all night the night before an all-night telethon to embroider t-shirts.

"Her struggle throughout the series is not to become cynical," said Poehler of Leslie. "This is a tough time for her to keep the department together and put aside plans for the immediate fixing of [the department]."

"I come in and my character is rather cynical because of this past for the character that they have worked out for him," said Scott of Ben. "This is an enormous test for him."

Hailey said…
I love Parks & Rec and am really looking forward to seeing Adam Scott and Rob Lowe on the show. Thanks for the update!
4/27/2010