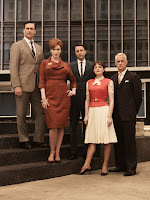 Looks like we're at the halfway point for AMC's Mad Men, at least according to creator Matthew Weiner. Speaking at last week's National Association of Broadcasters, Weiner stated that he would like to wrap up the period drama after six seasons as he couldn't see the series, produced by Lionsgate Television, going past that point. [Editor: Personally, I think that this is a good thing as an end date would allow Weiner to not only go out on a high note but begin planning the back half of the series' run while knowing just when it will end, much like Damon Lindelof and Carlton Cuse had requested an end date for Lost/] (The Weekly Blend via The Wrap's Weekly Blend)

Elsewhere at AMC, The Wrap's Josef Adalian is reporting that Breaking Bad is likely to be back on the cabler for a fourth season, following news that executive producers were told that the series is ready for a renewal. However, there is currently no deal in place between studio Sony Pictures Television and AMC. While neither side would comment, Adalian writes that "all parties are hopeful [a deal] will happen." (The Wrap's TVMoJoe)

Looks like some lucky fans will be able to say goodbye to Lost in style, with ABC preparing several official Lost-related events next month in Los Angeles and New York. Carlton Cuse spilled the info on the May 13th Lost Live: The Final Celebration event at UCLA's Royce Hall last week on Twitter, which is believed to be a fundraiser that will feature an advance screening of the series' penultimate episode and a live orchestra performance, conducted by Michael Giacchino, of music from the series. ABC has yet to announce this or several other events that are being planned for Los Angeles and New York in May, including two overseen by Paul Scheer and Upright Citizens Brigade for May 22nd. (Variety)

TV Guide Magazine, meanwhile, has the "final Lost cast photo," which depicts the cast of Lost among the wreckage of Oceanic Flight 815 as the actors are asked where they would like to see their characters end up once Lost wraps its run next month. (via Hollywood Reporter's The Live Feed)

Matt Smith's Eleventh Doctor will be appearing in two episodes of Doctor Who spinoff The Sarah Jane Adventures, both of which will be written by former Doctor Who head writer/executive producer Russell T Davies. The move marks the first time that Davies will have written for Smith's Doctor. The two-parter, part of the series' fourth season which is set to air this fall on CBBC, finds the Doctor reunited with former companion Jo Grant (Katy Manning)--last seen in 1973--and Sarah Jane (Elisabeth Sladen) herself, as well. "It's a fantastic script and I can't wait to work with another Doctor and hope Matt has fun with us," said Sladen. "I've known Katy for ages and I am delighted to be working with her. I last met her in LA but this time we will be in Cardiff. LA was good but Cardiff is better."

Entertainment Weekly's Michael Ausiello is reporting that Aaron Ashmore (Smallville) has been cast in a recurring role on USA drama series In Plain Sight this season. Ashmore will play "the smart yet rough-around-the-edges long-lost half brother to Mary (Mary McCormack) and Brandi (Nichole Hiltz)" who looks to reconcile with his siblings. He's slated to first appear in the back half of Season Three. (Entertainment Weekly's Ausiello Files)

Hollywood Reporter's James Hibberd is reporting that CBS is has shot a pilot presentation for a hidden camera comedy series WTF! (that would be, ahem, Wow That's Funny!) with Drew Carey. According to Hibberd, "the project combines a hidden-camera show with flash-mob tactics as the group pulls benevolent pranks on deserving citizens." Project is produced by Raquel Prods and RelativityReal, with Jay Blumenfeld, Tony Marsh, Charlie Todd, Drew Carey, and Tom Forman serving as executive producers. (Hollywood Reporter)

TVGuide.com's Adam Bryant talks to Stana Katic about tonight's episode of ABC's Castle, in which Katic's Kate Beckett gets a love interest, who just happens to be played by Battlestar Galactica's Michael Trucco. "It's really wonderful to have the opportunity to show a more sensual, romantic side to Beckett," Katic told Bryant. "I think it's great having someone like Tom Denning who is genuinely interested in Kate and is formidable enough to become a bit of a competitor for Castle... It forces Castle to have some introspection as to why he hasn't approached her yet in that way and what's going on with his relationships and past romantic experiences. He's had a number of girls swing in and swing out. So, this is an opportunity for us as an audience to delve deeper into something he may not realize he's missing." (TVGuide.com)

Warner Bros. Television has signed a blind pilot script deal with Canadian writer Rob Sheridan (Corner Gas), under which he will move to Los Angeles this summer to develop a half-hour comedy for the studio. (Hollywood Reporter)

HBO Documentary Films has picked up US television rights to Alex Gibney's documentary My Trip to Al-Qaeda, which it will air this fall. (Variety)

Cybill Shepherd has been cast opposite Jennifer Love Hewitt in an untitled Lifetime original telepic, where she will play Hewitt's mother, a waxer at a women's beauty salon who discovers that her daughter has become a prostitute in order to pay her bills and keep her family in their home. (Hollywood Reporter)

VH1 is set to launch a staggering 44 series, each of which will fall into the cabler's newly devised programming hubs: music, celebrity and "real life stories." (Hollywood Reporter)

Marjorie Cohn has been promoted to president, original programming and development, of Nickelodeon/MTV Networks Kids and Family Group. She continues to report to Cyma Zarghami. (Variety)

Marissa said…
I think that setting an end date for Mad Men is an excellent idea. It's a model that the American TV industry should use more often instead of running good shows into the ground!
4/19/2010