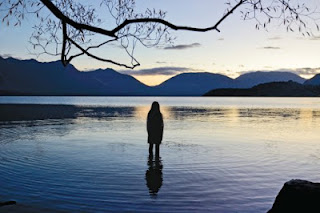 A missing girl. A shocking crime. A town full of secrets. Welcome to Top of the Lake, from creators Jane Campion and Gerard Lee.

At the Daily Beast, you can read my latest feature, "Gone Girl: Inside ‘Top of the Lake,’ Jane Campion’s Haunting New Thriller," for which I sit down with Jane Campion (The Piano), Elisabeth Moss (Mad Men), Holly Hunter (Saving Grace), and Gerard Lee (Sweetie) to discuss Top of the Lake, Campion's haunting and spellbinding new thriller, which launches on Monday evening on the Sundance Channel.

The Oscar-nominated director of such films as The Piano and Bright Star is in Los Angeles for a quick stop before the Sundance Film Festival, where her seven-part mystery drama, Top of the Lake, will be screened in its entirety over one day. We’re scheduled to meet for a drink at the Polo Lounge in the historic Beverly Hills Hotel, but Campion has vanished from the hotel, and publicists can’t locate her.

Considering the subject matter of her gripping Sundance Channel limited series—a missing girl and the effort to locate her by a dogged female detective running from her own past—Campion’s disappearance seems almost too fitting. When the 58-year-old auteur does turn up, along with co-creator Gerard Lee, she’s full of heartfelt apologies, her unexpectedly cheerful nature creating an instant intimacy. We settle into a booth in a corner of the restaurant and order a round of gin and tonics, chatting as though we’ve been friends for years.

Top of the Lake, which begins March 18, revolves around the disappearance of Tui (Jacqueline Joe), a pregnant 12-year-old girl, in a remote area of New Zealand and the detective (Mad Men’s Elisabeth Moss) tasked with locating her and unmasking the man who impregnated her. It begins with Tui walking into a frigid lake, only to be found by a concerned teacher. After the authorities and her father, Matt Mitcham (Peter Mullan), a bloodthirsty local crime lord, discover that her odd behavior is due to the fact that she is pregnant, Tui vanishes. Moss’s Detective Robin Griffin, a local girl who escaped from Laketop to Sydney years ago, returns to care for her cancer-stricken mother, only to be roped into the investigation. Robin discovers that in trying to find Tui, she must delve deep into her own history: she too is running from something dark and dangerous.

“Robin’s history is kind of a crime scene,” says Campion. “She has to solve it for herself, and she has to become aware of it first. She’s in denial ... and Tui is triggering it, her disappearance mirroring something for her.” It’s a classic novel structure, argues Lee. “The character, by following the case, goes into herself and her own psyche and her own past,” he says. “They’ve got to solve that before they can solve this thing.”

As directed by Campion, Top of the Lake is an atmospheric and moody piece, both haunted and haunting, a gritty look at what lies beneath the surface of a seemingly idyllic lakeside town. As in many of Campion’s films, the inner lives of the characters are as rugged and wild as the landscape itself, and Top of the Lake is no exception. Numerous story strands—Robin’s dark past, the venomous Mitcham and his ne’er-do-well sons, a New Age women’s camp run by the mysterious guru GJ (Holly Hunter)—all coalesce into a taut and provocative thriller about damage, vengeance, and escape.

Anonymous said…
Hey Jace,
just catching up on some of the reviews of Top of the Lake. Finally got to this one. Hi, again.