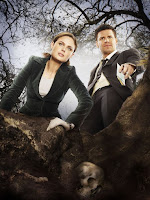 Entertainment Weekly's Michael Ausiello is reporting that Bones' 100th episode will in fact be a flashback episode to reveal the first time that Emily Deschanel's Temperance Brennan and David Boreanaz's Seeley Booth worked together. "We’ll be there for the first time those two personalities clashed, Bones executive producer Stephen Nathan told Ausiello. "Events will conspire to make them come out of the case hating each other and vowing that they will never work together again... We’ll also see the introduction of Angela and the genesis of her friendship with Brennan." (Entertainment Weekly's Ausiello Files)

Maggie Grace is confirmed to be returning for Lost's sixth and final season, according to TV Guide Magazine. She'll return to Oahu next month to reprise her role as Shannon Rutherford, who was last seen on the series in 2005. "Producers had invited Maggie back earlier, but the busy actress had to wait for shooting to conclude on a string of three film projects, including the role she just wrapped as Cameron Diaz’s kid sister in Knight & Day, also starring Tom Cruise," writes TV Guide's Will Keck. "I’m hearing Shannon may be cut into an episode shot earlier this fall with brother Boone, played by Ian Somerhalder." (TV Guide)

Ricky Gervais will host the 67th Annual Golden Globes award telecast, slated to air January 17th on NBC. The attachment of Gervais marks the first time since 1995 that the awards show has utilized a host. The Los Angeles Times' Denise Martin talks to Gervais about his upcoming stint. "I don't know! Maybe I'm cheap?" said Gervais when asked why he was asked to host the Golden Globes. "They're saving on presenters now because they all need goody bags," he said with a giggle. "No, no, someone must have said, 'Is there like a fat shmuck from Britain who doesn't know our ways and would think this is a real honor? Who'd do it for a giant pizza?' My agent overheard them..." (Los Angeles Times)

Microsoft has pulled its sponsorship of Seth MacFarlane's upcoming FOX comedy special Family Guy Presents: Seth and Alex's Almost Live Comedy Show. The commercial-free special is still slated to air on November 8th, even without Microsoft on board and the network will announce another sponsor closer to broadcast. "We initially chose to participate in the Seth and Alex variety show based on the audience composition and creative humor of Family Guy, but after reviewing an early version of the variety show, it became clear that the content was not a fit with the Windows brand," said a Microsoft spokeswoman in a statement. "We continue to have a good partnership with Fox, Seth MacFarlane and Alex Borstein and are working with them in other areas. We continue to believe in the value of brand integrations and partnerships between brands, media companies and talent." (Variety)

TNT has given a pilot order to drama Delta Blues, about a Memphis policeman who moonlights as an Elvis impersonator and who lives with his mother. Project, from Warner Horizon and Smokehouse Pictures, is written by Liz Garcia and Josh Harto, who executive produce with George Clooney and Grant Heslov. (Hollywood Reporter)

Chazz Palminteri (Bullets Over Broadway) will guest star on an upcoming episode of ABC comedy Modern Family, where he will play a friend of Ed O'Neill's Jay. (TVGuide.com)

FOX has given a pilot script order to Ravens Parish, a family adventure story about "a man and his teenage son who return to their rural Mississippi hometown in search of a fabled cavern hidden beneath a nearby swamp that allegedly holds hidden treasure." Project, from 20th Century Fox Television and Generate, will be written/executive produced by Dan McDermott (Eagle Eye), who has a first-look deal at the studio. Generate's Peter Aronson and Jordan Levin are also on board to executive produce. Project shouldn't be confused with the network's similarly-themed The Mysteries of Oak Island, also about treasure-hunting family members; FOX is said to be looking for a scripted series with wide appeal to schedule alongside American Idol. (Hollywood Reporter)

Entertainment Weekly's Michael Ausiello is reporting that Phil Morris will return to the CW's Smallville to reprise his role as Martian Manhunter in the upcoming "Society" two-part episode written by Geoff Johns, which sees the arrival of such Justice Society members as Doctor Fate, Stargirl, and Hawkman. The two episodes are slated to air in 2010. (Entertainment Weekly's Ausiello Files)

Did you miss Nathan Fillion's Halloween shout-out to Firefly's Captain Mal on last night's episode of ABC's Castle? Fret not as you can catch the clip here. (Hollywood Reporter's The Live Feed)

Augusten Burroughs has teamed up with Ashton Kutcher's Katalyst Films to develop several television projects based around his work, including a Showtime comedy based on his memoir "Dry" and a drama at CBS entitled The Nature of Fire, about male firefighters who are forced to work with a female arson investigator. Both projects will be written by Borroughs and produced by CBS Television Studios. (Variety)

Sherri Saum (In Treatment) has been cast in a recurring role on the CW's Gossip Girl, where she will play Holland Kemble, "a powerful business executive-turned-Upper East Side trophy wife and could be trouble for Lily (Kelly Rutherford) and Rufus (Matthew Settle)." (Hollywood Reporter)

James Van Der Beek will guest star in an upcoming episode of ABC's crime procedural The Forgotten, where he will play a financier who is questioned by The Forgotten Network. (Entertainment Weekly's Ausiello Files)

Comedy Central has ordered an animated project called Hounds, which will star comedian Ron White as the voice of Chicken, described as "a countrified Yoda with a bottle of Jack and a bag of weed, an opinionated Southern philosopher who considers himself the center of the universe." Chris Thompson will write the pilot script. Elsewhere at the cabler, Joey Kern (The Sasquatch Gang) has replaced Jonathan Sadowski in supernatural comedy pilot Ghosts/Aliens. (Hollywood Reporter)

MGM Domestic Television has acquired syndication rights to Discovery's quiz show Cash Cab and plans to get it on broadcast networks by next fall. (Variety)

Hadley said…
As a presenter, Ricky Gervais has outshone hosts at other award shows so I'm happy to hear that they're finally giving him the spotlight. Well deserved! Should make the Golden Globes MUCH more entertaining!
10/27/2009