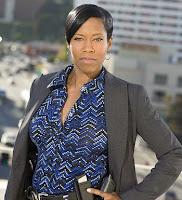 The Hollywood Reporter's Nellie Andreeva is reporting that TNT is very close to a deal with Warner Bros. Television to acquire cancelled NBC cop drama Southland. The deal, which is now said to appear "likely," would save the series--which produced six new installments for a second season at NBC--from cancellation, after NBC axed the series before launching the series' second season. (Hollywood Reporter)

Bravo has ordered a spinoff of its culinary competition series Top Chef entitled Top Chef: Just Desserts, which will air next year and focus on a showdown between pastry chefs in a weekly competition. Top Chef producers Magical Elves are on board for the spinoff, which will begin casting this week. No host or judges have been determined yet for the series, which will air in between cycles of Top Chef and Top Chef Masters. (Variety)

The Wrap's Josef Adalian takes a look at what appear to be the first two promos for Day Eight of FOX's 24, which have been leaked onto the internet. (The Wrap's TVMoJoe)

NBC has given full-season pickups to comedies Community and Parks and Recreation and drama series Mercy, bumping the episodic total to 22 installments for the trio this season. (Televisionary)

Entertainment Weekly's Michael Ausiello talks to incoming Grey's Anatomy actress Kim Raver about her upcoming multiple-episode story arc on the ABC medical drama. "She was in Iraq with Owen," Raver told Ausiello about her character, Teddy. "She’s a cardiac surgeon. She’s really good at what she does. There’ll be some interesting stuff between Teddy, Cristina and Owen." (Entertainment Weekly's Ausiello Files)

NBC is developing two new projects, including drama Nola Rising, about the unlikely partnership between a struggling private investigator and a charismatic ex-con who is a spiritual medium as they "help solve the problems of New Orleans citizens, living or dead." Project, from Universal Media Studios and Yellow Brick Road, is written by Medium's Diane Ademu-John and executive produced by Teri Weinberg. The Peacock is also developing hybrid comedy Ordinary People, about a twenty-something African-American married couple who are "fast-tracked professionals with four kids," whose lives are changed when the husband becomes a columnist for Rolling Stone and begins to work out of their house. Project, from Universal Media Studios, is executive produced by Kenya Barris and Scott Stuber. (Hollywood Reporter)

Warner Bros. is in final talks to pick up an untitled animated comedy pitch about a peacock from writers Austin Winsberg and Heath Corson. The studio is keeping the plot firmly under wraps for the project, which will be executive produced by Underground Film & Television's Trevor Engelson and Nicholas Osborne. (Variety)

Entertainment Weekly's Michael Ausiello is reporting that David Costabile (Damages, Flight of the Conchords) has been cast in at least four episodes of Season Three of AMC's Breaking Bad, where he will play Gale, the new assistant of Bryan Cranston's Walt. "Described as an eager student and a brilliant chemist, Gale is the antithesis of Jessie (Aaron Paul) in that he’s more interested in the magic of chemistry than getting rich," writes Ausiello. (Entertainment Weekly's Ausiello Files)

HBO has renewed drama series In Treatment for a third season. (Televisionary)

FOX has given a script order to an untitled single-camera comedy about a team of twenty-something computer geniuses who crack computer security systems. Project, from Sony Pictures Television and Happy Madison, is written by Adam F. Goldberg (Four Christmases), who will executive produce with Seth Gordon, himself attached to direct should the project be ordered to pilot. (Variety)

TV Land has given cast-contingent pilot orders to two projects. The first, comedy Hot in Cleveland, revolves around three female friends from Los Angeles, each in her forties, who end up in Cleveland but decide to stay "when they realize the locals consider them glamorous." (Editor: Flashbacks to 30 Rock's "Cleveland" episode.) Project, written by Suzanne Martin (Frasier), will be executive produced by Hazy Mills Prods.' Sean Hayes and Todd Milliner. The second, Retired at 35, about a wealthy businessman who leaves Manhattan to settle in his parents' Florida retirement home. Project was written by Chris Case (Reba), who will executive produce with Mindy Schultheis and Michael Hanel. (Variety)

Mad Men's Sam Page has been cast in a recurring role on ABC Family's Greek, where he will play Joel, "a smart and accessible local campaign manager for a congresswoman" who worked on Capitol Hill with the father of Dilshad Vadaria's Rebecca. Page is set to appear in Season Four of Greek. (Entertainment Weekly's Ausiello Files)

Piper said…
Top Chef: Just Desserts? If anyone else were doing it I would roll my eyes but, as a huge Top Chef and Top Chef Masters fan, I have faith in the franchise. And I'm happy to see that they are airing it inbetween the other series and not at the same time.
10/26/2009

Ralph Robert Moore said…
I love Top Chef, but have zero interest in a show about dessert chefs. Didn't Bravo film another spin-off, Top Chef Juniors about kids who want to be chefs? Whatever happened to that?
10/26/2009