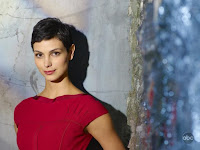 With less than a week to go until the series premiere of ABC's reimagination of cult classic sci-fi series V, the network has released a longer version of its "We Will Be Victorious" promo, which is set to the song "Uprising" by Muse.

While a 45-second promo featuring the song was released about a month back (and can be viewed below), Entertainment Weekly's Michael Ausiello has an exclusive look at a longer "Victorious" promo that clocks in at just under two minutes. (It can be viewed here.)

Meanwhile, ABC has scrapped plans for a viral publicity campaign that would have seen giant, crimson-hued Vs appear over 26 major American landmarks to promote the November 3rd launch of V, according to Hollywood Reporter's The Live Feed.

An ABC spokesperson tells THR's James Hibberd that they have decided to spend the funds in other ways, following a Washington Post column in which Lisa de Moraes calculated the amount of pollution that would have been created from the skywriting campaign, noting that ABC parent company Disney had made a pledge to cut its carbon emissions in half within the next two years.

But, as Hibberd is quick to point out, "Giant red 'V's in the sky might have also freaked a few people out."

Barrett said…
I'm looking forward to V but have to say I'm glad about the canceled sky writing campaign. It was clever but I think that studios need to be more responsible when it comes to their marketing schemes, goody bags, etc. There is so much waste in this industry!
10/28/2009

Unknown said…
I think V is going to be the series that carries the torch for Lost, not Flash Forward (unless they can ditch Joseph Feinnes who is absolutely awful, and improve some of the crappy dialogue). The extended trailer for V sends shivers down me. Really looking forward to it.
10/29/2009