"Helmets and Racism": The "True Blood" Writers Talk About HBO's Vampire Drama at the Paley Center 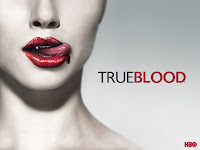 Season Three of True Blood might be a long ways off but I was able to get a taste of what we can look forward to in the meantime.

Expertly moderated by Entertainment Weekly's divine Alynda Wheat, the panel pulled back the curtain to reveal the creative process behind HBO's vampire drama, with the panelists teasing some information about the series' upcoming third season, which will launch sometime around June of next year and is currently being written. (They've so far broken about half of Season Three.)

Asked what the major theme of Season Three of True Blood is, Ball joked that it was "helmets and racism," and admitted that they just tell HBO that it's about "identity." (Which it is, in actuality, as Ball told me last month.)

Ball quickly addressed the recent news that rapper Snoop Dogg wanted a role on True Blood by saying that he's not a fan of stunt casting. (Sorry, Snoop.) Unless he was looking to cast a specific part wherein the character was a rapper and vampire, he's not calling Snoop Dogg as celebrity stunt casting takes the audience out of the story. So it's not going to happen anytime soon.

Wheat brought up comments made by Ball in the past about the fact that True Blood started to hit its stride in the fifth episode of Season One, where Bill speaks about his experiences during the Civil War and Sookie returns home to discover that Gran has been murdered. "It was Episode Five for both Six Feet Under and True Blood where it just hit its stride," said Ball, who added that those were the "moments where I said 'I get this. I know what this show is now.'"

Nancy Oliver said that she feels very lucky to be on HBO. It would be impossible to do this series justice if it weren't on premium cable, said Ball, who said that they are writing a series for adults. He once again said that "vampires are sex." And that the sex is meant to be adult and real and "be about something." That said, he admitted to being in the writers room and saying, "Come on, can we get his shirt off? It's Louisiana! It's really hot!" (Apparently, his cast isn't shy about nudity as Raelle Tucker said that the frequently nude Ryan Kwanten complained about having his clothes on for five episodes in a row.)

But True Blood is also able to deftly inject some much needed humor into the darkness and sexuality on the series. The humor in the series is not because the writers want to plug in a joke into a particular scene but rather, because the actors play everything so straight, the humor is often extremely unexpected. "Just let it be funny and let the actors play right through it," said Brian Buckner, a veteran of several sitcom writers rooms.

Likewise, there shouldn't be too much reading into the bigger metaphors on the series, such as the notion that the vampires are substitutes for the gay and lesbian community in our world. Those metaphors are just "fun window dressing," said Ball, but they are not the heart of the show.

Ball said that in hiring his writing team, he didn't read spec scripts for other series as he wanted to read something that was in that particular writer's voice, whether it be a script, a short story, a screenplay, rather than see if they could imitate someone else's voice. All of the writers praised Ball for allowing them to take risks with their individual scripts and give them much more freedom than they would on a typical one-hour drama, enabling them to follow their episode through prep and post-production as the on-set producer. Ball said he feels this is a natural evolution of their role as they know these individual episodes better than anyone, as they wrote them. Alexander Woo said it's a privilege that isn't normally accorded them on other series.

Several of the writers spoke about the fluidity of television as a medium, allowing the writers to course-correct based upon where the story needs to go. Because Nelsan Ellis' Lafayette was such a huge hit with the audience and the writing staff, they opted to diverge from Charlaine Harris' novels and keep the flamboyant short order cook alive. Likewise, Season Two indicated that the story needed to follow Eric and Jessica and Hoyt and the writers were able to push the plot in those directions because serialized television is a living, breathing medium that can change and go where the story dictates in a way that perhaps only comic books (by dint of their own ongoing, serialized nature) can.

Ball said he regretted killing Gran during Season One but said it was necessary and the right decision to make for the story as it was such a huge part of Harris' novels and would propel Sookie into adulthood. (He shrugged when asked about killing off Eggs.)

Asked which characters they most like writing for, Ball said he really enjoys writing for Jason and Lafayette. Tucker said she loves writing for Jessica and Hoyt. Buckner, to several hearty cheers in the crowd, said Eric. (Quelle surprise.)

Among the tidbits of information that Ball and Company revealed for upcoming storylines on True Blood:


Season Three of True Blood is slated to air next summer on HBO.

Bella Spruce said…
I would love it if Godric came back and having him in Eric's flashbacks would be the perfect opportunity! I also hope they can find a way to, somehow, bring the Newlins back into the story. They were two of my favorite characters and I think there is more territory to explore with them.
10/29/2009

ewench said…
Ok I can barely concentrate now after reading:

And Godric will be back yay! So many months away - what a tease!

Anonymous said…
Big fan of the show, but Evan Rachel Wood is an example of terrible casting. In a room full of real actors, she sticks out like a sore thumb, sucking the air out of every scene she's in. Haven't read the books yet, but I'm really pulling for her to get killed off post-haste.
10/29/2009