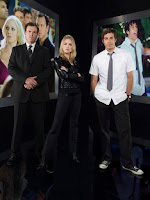 Good news for Chuck fans: NBC has opted to order six additional episodes of Chuck, bringing the episodic total for Season Three to 19 installments. (Huzzah!) While NBC has yet to announce an official launch date for Chuck's third season, the order of the additional episodes points to a potential January launch for the Warner Bros. Television-produced series, as does NBC's decision to cancel low-rated medical drama Trauma, which failed to garner a back nine pickup. Given the Peacock's cancellation of both Trauma and Southland, it now seems more likely that Chuck will return to the schedule before March. (The Wrap's TVMoJoe, Hollywood Reporter, Variety)

E! Online's Jennifer Godwin gets Lost co-creator Damon Lindelof to answer a few choice questions about Season Six of Lost while at a signing for the hardcover collection of Lindelof's Wolverine Vs. Hulk. Asked about whether fan questions have helped the writers frame a storyline, Lindelof said, "The fact of the matter is no question is ever asked of us that we're not asking ourselves. So by the time someone asks me if Libby's ever coming back to the show for the 14th time, I'm like, 'Trust me. I wish we could figure out a way to make that work.' Like, I wish I could talk to the actress and get down on my hands and knees and beg her to come back, but the reality is, you know, there are certain questions that every time you're asked it's a pain for you because you're basically like, 'I know man. You're absolutely right.'" (E! Online's Watch with Kristin)

Syfy has given a thirteen-episode order to an American remake of British supernatural dramedy series Being Human. Project, from RDF USA, will focus on the lives of three twenty-somethings--a vampire, a werewolf, and a ghost--who live together. No writer is attached to the remake and the hunt is on for a scribe to adapt the British series for an American audience. "We've always been keen on vampires and werewolves, and we loved the originality of Being Human, the fact that the fantastical creatures in it are very young, accessible and charming," said Syfy president Dave Howe, who added that the US version won't "slavishly replicate the British version." Meanwhile, the British version of Being Human is slated to launch its eight-episode second season on BBC One next year. (Hollywood Reporter)

ABC has announced return dates for comedies Better Off Ted and Scrubs. The latter will return to the lineup on Tuesday, December 1st, when it will relaunch itself with a largely new cast. Scrubs will launch initially with back-to-back episodes on December 1st but will then move to its regular timeslot of 9 pm ET/PT the following week, when it will be joined by Better Off Ted at 9:30 pm ET/PT. (The Wrap's TVMoJoe)

Desperate Housewives creator Mark Cherry has signed a two-year deal extension with ABC Studios that could keep the soap on the air through the 2012-2013 season. Under the terms of the deal, Cherry will remain on board Desperate Housewives as executive producer, though it should be noted that the main cast has only signed on through the series' seventh season, slated for the 2010-2011 season. Bob Daily has also signed a two-year extension with the studio, keeping him on board through those potential eighth and ninth seasons. Cherry, meanwhile, is currently developing new projects for the studio, including a multi-camera comedy about two brothers--one gay, the other straight--neither of whom knows anything about women despite the fact that they share a gynecology practice. Jeffrey Bowen and Hunter Bell will pen the script. There's also the drama that Cherry is writing with Alexandra Cunningham. (Variety)

Oliver Platt (Bored to Death) has been cast opposite Laura Linney in Showtime's dark comedy pilot The C Word; he'll play Paul, the husband to Linney's Cathy, a woman who is forced to come to terms with her cancer diagnosis. (Hollywood Reporter)

NBC has given a script order to an untitled drama about a crime-solving magician whose career is in shambles after he develops stage fright and agoraphobia but who finds a new purpose when a "an elite law enforcement agency recruits him to take an unusual approach to cracking tough cases." Project, from Universal Media Studios, is written by Dan Fesman, who will executive produce with David Percelay and Jon Amiel, who is attached to direct should the project go to pilot. (Variety)

BBC One has ordered six one-hour installments of The Accused, said to be the "spiritual successor" to Jimmy McGovern's The Street. Project, from McGovern's RSJ Productions, will follow a different lead character each week who has been accused of a crime and will focus on the unraveling of their lives as their individual trials get under way and a verdict on guilt or innocence creeps in. (Broadcast)

Radha said…
Huzzah indeed! Very happy about the additional order of Chuck episodes! Now if NBC can just not screw it up...
10/29/2009

David J. Loehr said…
Sounds like someone there has watched some "Jonathan Creek" and forgotten the details. Magician with stage fright? Okay, slightly different, but jeez...
10/29/2009

Lance said…
Thrilled to hear that the delightfully quirky Better Off Ted will be back on the schedule soon.
10/29/2009

Ha! We are clearly thinking alike. My first instinct upon reading about the magician project was, "So, this is how NBC is going to rip-off Jonathan Creek... badly then?"
10/29/2009

Charlotte W. said…
Does NBC not read the trades?

ABC has already greenlit has a screen order for an hourlong with Penn and Teller, staring as themselves, moonlighting as detectives. So NBC is going with the exact same thing (minus the star power)?

Anonymous said…
I only hope and pray they don't screw up the US version of Being Human because the English original is fantastic!
10/29/2009

Mimi C said…
There is no need to re-make Being Human for an American audience. I don't see how this would garner a significantly larger audience than those of us who watched it on BBC America. It was not really British in the way that Coupling or the Office were. Sigh, did they learn nothing from life on Mars?
10/30/2009

At least they'll only be ripping off "Jonathan Creek" instead of sullying it the way a watered-down, blue-skies, official remake of "Prime Suspect" would.
10/30/2009

A remake Prime Suspect is sadly already in development at NBC: