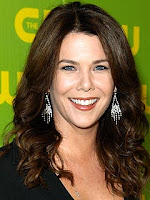 NBC and Universal Media Studios have reached a deal with former Gilmore Girls star Lauren Graham to come aboard midseason drama series Parenthood. Graham will replace ailing actress Maura Tierney, who was forced to bow out of the project due to health issues, on the Jason Katims-created drama, based on the 1989 feature film. She'll play a harried single mom with two kids who moves her family in with her parents in order to jumpstart her life. (Variety)

Entertainment Weekly's Michael Ausiello talks to Southland star Michael Cudlitz about the sudden cancellation of the NBC cop drama. "In retrospect, I saw it coming," Cudlitz told Ausiello. "We were two weeks away from airing and [the cancellation news] has created more press for the show than NBC has put into it on its own. They ran the first [Southland] ad — a 30-second spot — last Friday, and that’s the only one that they ran. That’s not a relaunch. When you have a network that nobody’s watching, it doesn’t benefit you to only advertise on your network." Cudlitz was quick to point out that he has hope the series will land on another network. "I do because we have episodes that have never aired that are pretty fantastic," he said. "And if it moves somewhere else, it could become the show that it should have been initially — which is even darker and grittier." (Entertainment Weekly's Ausiello Files)

Call it the shortest maternity leave ever. E! Online's Kristin Dos Santos is reporting that Ellen Pompeo will return to the set of ABC's Grey's Anatomy very quickly after the birth of her baby (who was born on September 15th) and, "thanks to her early return, as well as her willingness to preshoot scenes before the birth (most of which took place in bed after Meredith's liver surgery in last night's ep)," it appears that Meredith Grey won't be missing from a single episode of Grey's this season. (E! Online's Watch with Kristin)

CBS has ordered pilot scripts for two multi-camera comedy projects from Chernin Entertainment and 20th Century Fox Television. The first, from How I Met Your Mother's Chris Harris, is about the unlikely friendship that develops between a thirty-something executive and a 22-year-old who works in the same office. The second, from Jared Stern (Bolt), revolves around a group of workers at a Target-like superstore. Peter Chernin and Katherine Pope will executive produce both series along with the respective creators. (Variety)

Could NBC be moving up the premiere of Chuck? And is it a good thing? (Televisionary)

Chris Elliott will play the estranged father of Allyson Hannigan's Lily on CBS' How I Met Your Mother, according to Entertainment Weekly's Michael Ausiello. "The highly-anticipated family reunion is slated to air Nov. 23 when father and daughter come face-to-face at a Thanksgiving celebration hosted by Lily’s grandparents," writes Ausiello. "I’m told the episode will feature childhood flashbacks that will shed light on Lily’s very troubled relationship with her father." (Entertainment Weekly's Ausiello Files)

The strangest non-story story of the day: Emmy-winning scribe Kater Gordon has left Mad Men just weeks after winning an Emmy for her work on Season Two's season finale, "Meditations in an Emergency." While some were way too quick to read into her strictly professional relationship with Mad Men creator Matthew Weiner, others jumped to both Weiner and Gordon's defense, saying that the parting was "amicable" on both sides. (Deadline Hollywood Daily)

BBC is reviving classic British drama series Upstairs Downstairs as two 90-minute episodes to run next year. Jean Marsh and Eileen Atkins will reprise their roles from the original drama in the new Upstairs Downstairs, which will be set in 1936 rather than in the early 1900s. “We rejoin the world of Upstairs Downstairs in the years leading up to the Second World War," according to a BBC spokesperson. "Times are changing and servants are no longer cheap and obedient; Rose soon finds she has her work cut out. Meanwhile, in the wider world, Edward VIII has ascended the throne, fascism is on the rise, and Europe is inching towards catastrophe." (Broadcast)

Rick Springfield will play a "very twisted, warped version" of himself on Showtime's Californication, where he will appear in a four-episode story arc that began last night. (Hollywood Reporter)

Bella Spruce said…
I think that Lauren Graham will be a good fit on Parenthood. I love her but have yet to see her in a decent project since Gilmore Girls!
10/12/2009