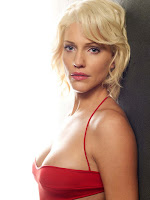 Entertainment Weekly's Michael Ausiello is reporting that Battlestar Galactica star (and Maxim cover girl) Tricia Helfer will guest star in an upcoming episode of CBS comedy Two and a Half Men, where she will play a friend of Charlie's fiancee. "Natch, when Chelsea hears her bosomy buddy is recovering from a breakup," writes Ausiello, "she insists that she do so at Casa Harper." Helfer's episode is slated to air November 16th. [Editor: while I love that Helfer is working steadily, can we please land her a series regular gig ASAP?] (Entertainment Weekly's Ausiello Files)

SPOILER ALERT! TVGuide.com's Natelie Abrams talks to True Blood executive producer Alan Ball about what's coming on Season Three of the HBO vampire drama, set to air next summer. "It's a crazy season," Ball told Abrams. "It picks up right where we left off and things get weird really fast." [Editor: Ball teases some tidbits about the third season but beware of a MASSIVE spoiler for people who haven't read Charlaine Harris' Sookie Stackhouse novels.] (TVGuide.com)

Entertainment Weekly's Michael Ausiello catches up with Lauren Graham to talk to the actress about her new role on NBC's Parenthood, her decision behind joining an ensemble drama, and her character, Sarah Braverman. "I’m getting together to talk with Jason this weekend," Graham told Ausiello about discussing her character with the series' executive producer Jason Katims. "That’s one of the key things [I liked] about this job was he was like, 'I really want to hear what you want [this role] to be.' We’re still kind of working that out a little bit. What I said to him is I’m interested in the flawed part of her. For seven years I played someone who people come up and say, 'I wish my mom was just like Lorelai.' That’s not this character. She’s not perfect. She’s funny and smart and she’s doing a pretty good job, but she’s struggling, and that’s what I’m drawn to. In my experience, it’s the less noble parts of someone that are the most interesting, especially over a long story." (Entertainment Weekly's Ausiello Files)

Showrunner Dee Johnson will depart CBS' The Good Wife, which will see showrunner duties on the well-reviewed new drama taken over by co-creators Michelle and Robert King. Johnson will focus on development for next season after fulfilling her commitment to oversee the pilot and first twelve episodes of the The Good Wife. (Hollywood Reporter)

E! Online's Kristin Dos Santos is reporting that the downed plane that will land on Desperate Housewives could be an Oceanic Airlines plane in a bit of cross-network branding/promotion with Lost. "The plane's Oceanic branding would just be a fun little Easter egg for Lost fans to find," and ABC insider told Dos Santos. "And while the crossover has yet to be finalized, I'm told the higher-ups at ABC are keen on the idea." (E! Online's Watch with Kristin)

NBC has given a script order to drama Welcome to Hitchcock, from writer/executive producers Steve Mitchell and Craig Van Sickle and executive producer Teri Weinberg (yes, that Teri Weinberg) and Universal Media Studios, about a "skilled but restless police detective who, in search of his missing brother, relocates to the city of Hitchcock, Calif., where he soon discovers a world of half-truths, peculiar characters and unanswered questions lying beneath the town's sparkling, friendly, blue-sky veneer of tradition and family values." Meanwhile, ABC has given a script order to dramedy Go Girls, a US adaptation of the Kiwi series about three women in their twenties and their male childhood friend who "dissatisfied with their lives, make challenging promises to one another that they set out to fulfill." The latter project, from ABC Studios, will be written by Liz Tuccillo and executive produced by Tuccillo, Julia Franz, and John Barnett. (Hollywood Reporter)

Ouch. ABC's Hank will be pre-empted by a second airing of It's the Great Pumpkin, Charlie Brown on October 28th, a night after the network airs the "expanded one-hour" version of Great Pumpkin. While ABC isn't commenting about Hank's future, it doesn't bode well for the Kelsey Grammer vehicle. (The Wrap's TVMoJoe)

NCIS star Michael Weatherly is definitely against having his character, Special Agent Anthony DiNozzo hook up with Cote de Pablo's Ziva David. "Let’s look at it from a practical angle," he told EW.com. "It’s Kryptonite! She’s an assassin! That’s like marrying a hooker. You gotta be real comfortable with the fact she’s gonna go hook! I don’t see how, domestically, (a relationship) would work. But that’s me. Tony DiNozzo is completely unaware. You never know. Maybe they’ll be like those YouTube videos when you see the mongoose and the snake. Before they ever got together, one of them will kill each other. You never know." (Entertainment Weekly's Hollywood Insider)

Mad Men's Elisabeth Moss will guest star on an upcoming episode of NBC's Mercy, where she will play Lucy Morton, a cancer patient has lost her hair due to treatment. Moss' episode is slated to air November 4th. (TVGuide.com)

Fox Reality Channel will be replaced by Nat Geo Wild, a joint venture between National Geographic Ventures and Fox Cable Group that will focus on animals in "wild, natural environment." (The Wrap's TVMoJoe)

TVGuide.com's Gina DiNunno talks with Ugly Betty star Eric Mabius about what's coming up on the fourth season of the comedy series, which returns tonight with a two-hour opener. "Daniel is kind of losing it this season," Mabius tells DiNunno. "There's a bunch of funny stuff that happens, but it's sad at the same time. For quite a few episodes, we see him lost and sort of little boy-like. He's grasping at straws, and he's having serious anger issues, which he's trying to get a handle on. Daniel's lost because this was the first mature love of his life. He's completely not over Molly and doesn't know how to process it." (TVGuide.com)

Paige Turco (Damages) and Barry Bostwick (Spin City) have been cast in NBC's two-hour backdoor pilot The Mountain. The project, from Canadian production company Muse Entertainment, revolved around "Dana (Turco) a single mom with three kids who inherits a remote mountain cabin from a supposedly dead uncle. But when she heads off to the cabin, she discovers that her Uncle Henry (Bostwick) is very much alive, and they set out to keep an evil buyer from gaining access to the mountain that holds secrets and treasures." (Hollywood Reporter)

Oxygen has renewed docusoap Tori & Dean: Home Sweet Hollywood for a fifth season, set to air on the cabler in spring of 2010. (Variety)

Modern Family scored 444,000 viewers during two airings of its pilot episode on Sky1 in the UK last night, handily doubling the timeslot average over the last six weeks. (Broadcast)

Rudolph said…
I loved seeing Tricia Helfer on Chuck but Two and a Half Men? Really? She definitely deserves better--like her own Alias-type show.
10/16/2009